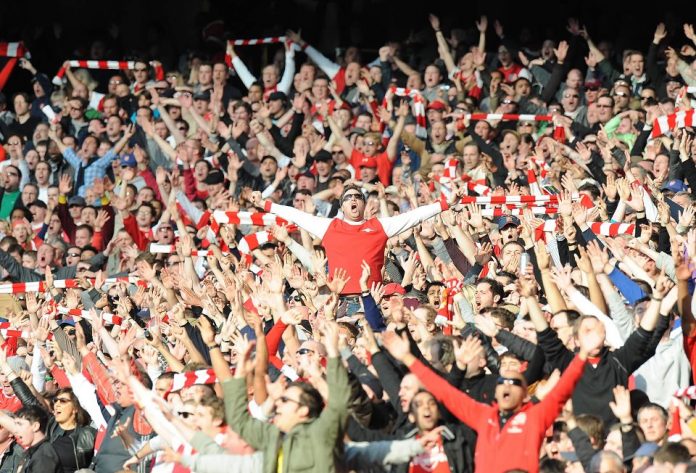 Robin van Persie believes that the atmosphere he has experienced at the last two home games proves that a special bond exists between the Arsenal fans and Arsene Wenger’s current squad.

Roared on by fervent support at the Emirates during a magnificent comeback against Tottenham Hotspur and the equally impressive hammering of AC Milan, the Dutchman made clear that Gooners are an intimidating twelfth man when buoyed by quality on the pitch.

Reflecting on a recent run which has put Arsenal within touching distance of neighbours Spurs, Van Persie told the matchday programme of his pride at the burgeoning rapport between those in the stands.

“During that period, our fans have been incredible. I really mean that – the atmosphere in the stadium has reached unbelievable levels and that makes me feel very proud. I sometimes hear people saying that Emirates Stadium can be quiet, but I’m completely certain that those people will adjust their opinions now.

“Our bond with the supporters is special and has been there for a long time, but in the last few games I feel it’s reached a new level. As I’ve said before, it’s down to us to give them that energy, to show them that we are ready for the fight, and then they will respond.

“That’s what has happened recently – the fans and the players have worked together and made a really good team!”

Hopefully another intense atmosphere tonight against Newcastle will help the boys to three more vital Premier League points. We may not have any silverware to play for, but given the rollercoaster nature of this season the fact that the team have managed to get the fans back on side says a great deal.

The least we can do in return is sing without the handbrake on.

They cheer without the handbrake on.

But lacking a little bit in tenacity and precision in the chants. A bit of sharpness, some might say. But good quality in the final third of the ref abuse. But that is to be expected, with 3 matches a week. It is very physically demanding.

I imagined this spoken in Gob Bluth’s voice, enjoyable.

It is what it is
Reply to  Furious Styles

My friend went to the Emirates and all I got was a lousy three points.

We need to sign new fans, most of the fans we have are too young, we need experienced fans with good positional awareness, ideally fans who have won trophies at other clubs. Trophies for being fans.

The fans coming back for this game is like a new signing.

Let’s hope the crowd can replicate the atmosphere against Villa, Wigan, and Norwich. Only after these games will we know that the crowd has turned off the handbrake permanently.

The crowd turns it up when they really care about the result enough. When they’re excited enough for the game.

Time to turn on the screw on the Spuds. St Totteringham’s Day is still on course!

And I was just about to put my boxes of decorations back in the attic for the season. Christmas is great and all, but there’s just something so warm and fuzzy about the 12 Days of Gloating. Up the Arse!

So boos, bin bags and banners don’t help the team then. Well I never.

Don’t make fun of the ‘realistic’ fans . they speak the truth…by booing and hopefully Theo will score a hat trick every match

I’ll take us finishing above Spuds happily this season given how horribly we started the season and media cunts predicting we wouldn’t finish even in top 6.

Man, I wish I lived in London!

I love how RvP is painting himself into a corner. A red and white corner, that means he’ll look pretty fucking daft if he takes the oil dollars on offer this summer. I mean it’s not quite telling his agent to stick his dreams of 15% of a £50m transfer fee up his arse, but it’s close enough for me.

I think the fans at the start of the season lacked a little bit the sharpness required to compete at this level. But they have improved remarkably in recent weeks and are truly showing their class and ability.

the only sam is nelson
Reply to  Joe

West upper, block 88, they’re on a fat contract, always injured and frankly don’t care enough. They should be sent out on loan or sold. Possibly to Fulham

feygooner
Reply to  the only sam is nelson

Arsenal should ALWAYS loan to Bolton.

The Emirates since the Spurs has been a LANS.

I see I was too late.

The most beautiful part of AC Milan match was at the end of the game, as the 2 Thomas’ lay exhausted and deflated on the pitch, large portions of the crowd stayed and sung to them, giving them a big vocal hug. It was a special moment.

0-1 down at home to the spurms woman behind me on clock upper told me to sit down as I cheered on Arsenal as loud as I could. I just told her to shut up because I have seen home stewards eject home fans for less. The crowd is good the support is great but I have seen some officious bollocks from wanker stewards over the years. C’MON ARSENAL!!

RVP is showing what a great captain should be doing, unlike previous captains. Leadership on the pitch, leading by example and all the right noises off the pitch lets all hope that captain vantastic signs on the dotted line in the summer and we can shape a team capable of winning on all fronts next season and beyond.

The fans sing when they want!

” I sometimes hear people saying that Emirates Stadium can be quiet, but I’m completely certain that those people will adjust their opinions now.”

Na$ri anyone? He’s at City winning f*ck all. Bless you Robin.

I managed to go to the ac milan home leg last week for my first arsenal match. prematch it was all the italians chanting and making the atmosphere “intimidating”. come kick off and come the 3 goals they seemed to be in a funeral heh. We sang our hearts out after the final whistle for almost 15 mins.we really rocked the place. i came all the way from kuwait for the game and i dont regret a single minute.

Wow coming from Kuwait to see the Arsenal in a game they’re already 4:0 down is not bad. It was a good decision to still go all the way i guess

Well, i booked it before the milan away game heh. still experiencing it was something priceless and something i will hopefully experience next year 🙂

Arsenal fans have a great spirit. There is a great togetherness between the fans, and you could see that last weekend when they cheered without the handbrake on. If there is any news fan activity I will be the first to tell you. They have great mixture of character and spirit.

IN WENGER … I TRUST!

Did i just heared Na$ri say we fans are not passionate??? He’s a cunt!!!