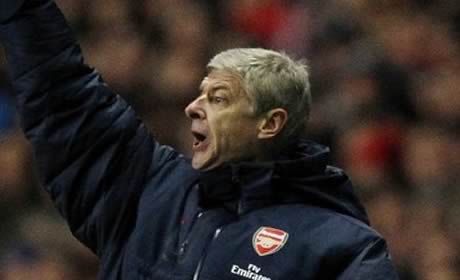 Football is full of clichés. For example:

And many more. But there’s one particular cliché that fits where Arsenal are at this moment in time, and that’s the old classic in which we take it ‘one game at a time’. And we could even throw in a half-measure of ‘each game is a cup final’ too, if we really wanted.

We sit in fourth at the moment but the competition for the top four is fierce and after so many slip-ups this season we have little or no margin for error, something Arsene Wenger is well aware of.

“It is so fragile that it is just down to the next performance. Therefore that is what you want to focus on,” he said.

“We had a little bit of a breather because we could come out of the Newcastle game and not play for nine days basically so it is important for us to focus again and keep the momentum going.”

And the boss knows that this run is so crucial to Arsenal’s chances of Champions League football next season and all that it would entail with regard to our summer business.

“That is what we want to do of course, just focus on our next game and try to do as well as we can.”

Hopefully Arsenal can a goal early doors, get Everton on the back foot and that none of our players are on the end of a typical forward’s tackle.

As long as they dont play with the handbrakes down, I’m good..

TRANSFER RELATED cliches 2011-12
“europe is in crisis”
“there is no movement in the market”.
“if i find super quality i will definitley go for it”*
“spending money has never been the target”
“i like this guy he can play on the left,right, and centre”**
“The market will be hyperactive because everyone believes financial fair play will happen soon, And for the first time for a while, I will be very active, too.”***

*this is an exception cuz we know how he bought thierry suddenly from nowhere.
**yes, perhaps he can keep too
***referring to last summer.

surely its… as long as they don’t play with the handbrakes up, I’m good..

Nice, MP. I almost heard AW saying it as I read it.

He can say whatever he likes so long as I don’t have to write: “Did you see that ludicrous display last night?” tomorrow morning.

what was wenger thinking sending walcott on that early

Heh – “The problem with Arsenal is that they try and walk the ball in.”

Tonight will all be about the speed of our passing, our technical quality, but I am convinced that this team has tremendous mental strength and it can do something special.

It’s all part and parcel of football.

We’ll let our feet do the talking. I swear Gerrard is so inarticulate that he says this in every interview; my most disliked football cliche.

“I swear Gerrard is so inarticulate….”
Well what do you expect from someone trying to talk through his feet?

For all the away fans, make sure the team can hear you. Why?
“A football team is like a beautiful woman. When you do not tell her, she forgets she is beautiful.” – Wenger circa 2004

You forgot about the other cliche, Gael Cliche. I’ll get my coat

I’ve already thrown it out the door for you, my good sir.

You forgot: ‘He’s not that kind of player’ and ‘Get in their faces’ also ‘let him know your there’

Or how about Senderos’ “Come in your faces”?

Wenger’s best ever line: “Everyone thinks they have the prettiest wife at home.”

I really wouldn’t want to be on the end of a really hard forward’s tackle, though I know many people on here would

At the end of the day, as long as we give 110%, we’ll come up smelling of roses. We mustn’t forget that a win is just 3 points, but every point counts.

How about: “From now on, every game will be like a cup final”?

Man-shitty already used that one this year. I prefer to keep my distance from that nut job

Wenger used it first , they get everything from us

‘The Anfield crowd really know their football’……what utter shit, they are just like every other crowd but with curly hair and no jobs.

My favourite ever footballism as opposed to cliche came from Graham Taylor in ‘Do I not like that’. Lawrie MacMenemy asks him what pearl of wisdom Graham had just told the press, his response …’Heads! I said you play football with your heads’.

I for one think that with Walcott’s pace to burn and our Dutch ace Van Persie’s cultured left foot, we may not even have to dip into the warchest and swoop for as many players as feared this summer. Although it has been Keystone Cops at the back this term…

Where do we keep this infamous warchest? Would it not be safer to keep our money in a bank like everyone else?

in the armery, of course.

we’ve got the “mental strength” to succeed

footballistically, perhaps you have every cliche in your list

but i would not know

as i did not see *smiles knowingly*

I always hear we struggle with team that bunker. That’s because we always looks to walk it into the goal. How about for once we start taking outside shots and force the defense to come out a bit further and open up the box a bit. We aren’t a great heading team, so let play to our strengths. Hope this is less tip-tap passing around the box and more shooting. Kos, Song, Verm, heck even arteta showed he’s got a rocket.So lets unleash some bullets and force everton to open up. Up the gunners. P.S. the every game is a… Read more »

I seem to have lost some sharpness, footballistically speaking.

My Favs:
“We were a bit unlucky”
“It’s just like a new signing”
“I don’t know, I couldn’t see it”
“We have to learn from our mistakes”
“4th place is our trophy”

Slightly of topic, how about
“The Dammed UNI73D”
anyone suspect ghostly goings on last night on what would have been Brian Cloughs 77th birthday, when his beloved Forest put 7 past his arch enemy of a team, Leeds on their on patch. Nice one Brian :o)

“He Scores when he wants”
“They are a one a man team”
“No we are not!!!,what about the assisters and the defence”
“Yes You are without RvP’s goals you be 17th in the league”
“Yes and without you dad’s testicles you wouldn’t exist”

Yes you are! They say admitting you have a problem is the first step but I don’t think it’s gonna help you…. cunt!

“the next goal is vital to the outcome of the game” They always say this. What does it mean? Is there some sort of rule I don’t know? OBVIOUSLY A GOAL IS GOING TO AFFECT THE END SCORE.

Reminds me of one of my favourite Andy Grayisms

At 0-0 in a game between us and Chelsea, he declared boldly “the team that scores first will win this”

we scored first and we lost 2-1. In the post-match commentary: “As I said, the team that scores the first goal has a good chance of winning but there’s always a chance that the other team can come back into it. That’s what happened tonight.”

don’t forget that old classic:
“this game will be won and lost in the midfield.”

Yes,I am a hideous,money-grabbing,bench bothering supercunt,but you can poke your abuse-I’ll just take it like a man,on the chin…
see you at the emirates,the benches are the best there…

After reading all the way down here, I have finally shot myself.

Come on guys! We really need to stop getting cramped in midfield and learn how to beat teams who park the bus.