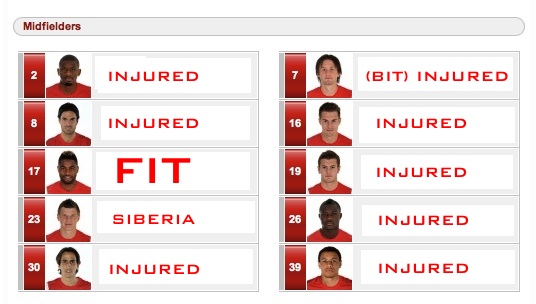 Arsene Wenger has given an update on the status of his ‘decimated’ squad as he looks to cobble together a team to face AC Milan in tomorrow’s Champions League last sixteen second-leg.

Slaughtered 4-0 in the San Siro two weeks ago, Arsenal have, on paper, little to no chance of progressing to the next round. However, with nothing to lose the boss has already admitted he’s tempted to throw caution to the wind by playing six forwards, a rush goalie and Pat Rice in place of Kieran Gibbs.

Speaking in the pre-game press conference Wenger revealed that the three players he was forced to substitute at Anfield would all miss the Milan clash.

“We have lost Benayoun, Diaby and Arteta as well. Arteta has to rest for a week.

“Rosicky is doubtful too. But we will put out the best side for us to qualify.”

Kieran Gibbs is understood to be nursing a knock as well, but did train with the first team squad this morning and should play if he passes a late fitness test.

The number of injured midfielders leaves Arsene with quite the quandary. Given that Jack Wilshere and Aaron Ramsey are also unavailable, and Andrei Arshavin has been loaned to Zenit St Petersburg, it might not be surprising to see young Alex Oxlade-Chamberlain given another run-out in the centre of the park next to Song and Rosicky.

Let’s give them a real go at it no matter what team is out there. COYG!

Rush Goalie.Love it.The way Chesney is playing he will get a hat trick.
Roy of the Rovers eat your heart out.
Obviously I don’t want to lose tomorrow but as long as we give it a real
go I will be happy.

speaking of park I want to see him play too

I don’t actually want to see him play anymore. If he was good enough, he would have played. He’s obviously not, so we should sell him in the summer. Harsh but true.

I don’t want him to start I just want to see if he’s alive or not, I feel a little bit better knowing that diaby is actually alive aswell

Oh no, we’ve lost Diaby, what a surprise!

Don’t say that, you might hurt his feeling and he could go injured for another 6 months.

In all seriousness, it’s time for him to go. This summer I would like to see him offloaded to any club who wants him – even if he goes on a free transfer. We are wasting precious wages on him, and he’s blocking a squad space. It’s vital that we have fit and available players to enable the manager to rotate.

I feel sorry for Diaby, but enough is enough.

People were saying similar about Van Persie not so long ago.

Perhaps Diaby will be another late bloomer.

I wonder if all those ‘specialists’ he saw in the past 6 months will offer him a refund.

Diaby must be the highest paid player in the history of the game. Considering he gets paid 60k per week and plays about 20 minutes per season, Diaby earned £156,000 per minute on Saturday.

I mean, I know the club prides itself on its charities and what not, but…

What a drain. I’d love to free up some wages to hire players who can contribute to the footballing side of a football club. Strange idea, I know.

are u always this depressing?

Diaby is apparently always positive and his attitude has been inspiration to a lot of youngsters at the club. I don’t think it would be right of arsenal to let him go like that. It might be wise to give him another contract with less pay and some sort of ‘appearances’ condition. Really, really think we should keep him. He’s ‘top quality’ when fit.

I remember a player was similar to Diaby injury wise, his name was Saha. This player use to play 4/5 games a season and since his Pay as you Play deal at the age of 31. Srprisingly, he started to play 30/35 games!!!!!!

Yes, but with Rosicky doubtful, if he can’t play, Arsenal would only have 2 CM’s INCLUDING Ox. If Rosicky can’t go, I expect a 4-4-2 simply out of necessity.

Absolutely nothing on diaby though, doesn’t seem as if anyone bothered to ask. Any chance it’s just another little setback or is this curtains?

Diaby doesn’t do little, his little is 3 months.

If Carlsburg do injuries, they wouldn’t do it as good as Diaby.

Just out of interest I checked the odds on us to qualify for the next round: 16/1. Much lower than I would have thought. For us to win 5-0 the odds are 90/1 and 6-1 is 225/1. I’m not taking these odds I just thought I’d have a look at how the bookies see our chances! We’re not going to quality for the quarter finals as far as I’m concerned, too many injuries, too much of a deficit to overturn, and if anyone watched Milan against Palermo recently they’d know Milan are in really great form. That said, hopefully some… Read more »

dont know where you get your odds from, but arsenal to qualify are 25/1 on stan j and bet365, which is about right.. and given our injuries i would’ve expected about 30/1 but the odds havent been updated since last week.

im probably gonna put a cheeky tenner on it.. 🙂

Here on Paddy Power we’re only 16/1 to qualify. As I said I thought it would be higher. Much higher actually.

Right well I understand right now why Paddy Power only gave 16/1 on us to go through…..

So we are left with only Song, Rosicky, Ox, Theo and Gerv as fit in mdfield!!!!.

Oxlade played centrally for southampton many times and he even says its probably his favoured position…sooo I think he would be more than capable.

Wilshere, diaby, frimpong, arteta, Beneyoun, arshavin, ouch. Could do with Lansbury! Maybe ozyekup could get a game? But he’s prob down to play in the reserves in abt a hour?

Let RVP rest, use Afobe instead.

We’ll knock ’em out.
You heard it here first.
(I hate Milan AC more than Spurs what with them being Italian and me French+ Inzaghi+ Berlusconi+Boateng, my god I really hate those wankers)

It is a game to watch, 1st half arsenal will be 3 good goals up, 2nd half another 3-1. Arsenal will progress to q/finals.

My heart says we are still in the CL but that’s the same heart that falls in love every now and then.
My head says we are out and just four points off spurs who play away to everton over the weekend and can’t afford another santosesq injury to our key players. But that’s the same head that breaks people’s hearts every now and then. And i hope we break those LWC’s hearts and very soon

hope wenger lives up to his word and we do go all out – have nothing to lose as he said. given our injuries, should play 3-4-3, chuck everyone on, ox, theo, gervinho, robin, song, afobe, and anyone else that has got goals in them. its definitely gonna be a hard game, italians are known for their defending and one-nils, and this AC milan team is the best ive seen in years, so not expecting a qualification, but am expecting a lot of effort, heart, and a win seeing as we’re home. see what happens, and if the impossible is… Read more »

Ozyekup not in the reserve team! Hmmmm. Maybe?

We need to go 442. Theo, ox and gervinho could all swap throughout the game to give the italians something to think about and hopefully rosicky can play with song in the middle.

We have absolutely nothing to lose so lets hope for a good game of football. Even if we don’t progress it would be nice to beat them.

I really think Chamakh should start, along with RVP – play RVP in the Bergkamp role, or even as the most advanced midfielder. I think he’d excel there, and also get the maximum out of Theo, who hasn’t had the consistent service he had when Cesc was in the team. Chamakh isn’t in the most inspiring form, but unfortunately he’s the only option we have really. Oxalade Chamberlain will also have a massive responsibility in the game. I think its a given he’ll start in midfield – we don’t really have any options, and he’ll have to be tight defensively… Read more »

I won’t watch tomorrow game against Milan because the odds are too much stacked against us.The team is decimated by injuries and we have to score at least five goals without conceding. But,i hope we win so that we can restore some pride. We have nothing to lose,so i expect AW to put forward a totally attacking options like 4-2-4.You never knows,wonders might just happen.

Real fan, huh? You should still watch even if we lost the first leg by 20 goals.

with RVP in the team, anything is possible so bring ’em on!!!

I love the optimism but an Italian team has 2 weeks to prepare how to defend a 4 goal lead against an English side who can only play a certain style, I can’t see it happening. We struggle breaking down 2 banks of 4 when its Everton or Bolton, I think I could manage Milan to navigate themselves through this tie.

Still, let’s hope we show some spirit and give them a game. COYG!

Ill eat my knickers if we go through tonight. I can’t see us raising the level much above the Liverpool game. Lets not get carried away with spurs. Liverpool highlighted the reality. Were poor. Milan to win again.

Safe bet given that game is tomorrow 🙂

Rvp, Gerv, Theo all to start up front. A midfield of AOC, Song, Ros.

Well, I do believe in miracles. And even if I didn’t believe, there is a certain Dutchman in our team 🙂 🙂 Anything is possible. Just keep the faith….

I hate the term COYG … I swear Sp*rs started all that shit!

What are the odd on Van Persie scoring 5 tomorrow?

It’s a spu*s class phrase.
Can we have an article on that.

kick out COYG from ur gooner dictionary campaign.

Don’t think we need a third midfielder. This is probably the best time to revert to our 4-4-2 formation. It’s more suitable for the players we have fit now and we have nothing to lose

Abou Diaby injured again fuck me he should be grateful he isn’t a horse otherwise he would have been taken out to the back of London Colony and shot.

would love to see Alex Chamberlain play in the middle. If i’m honest. boy we’re really short of midfielders. good thing we have OZZY OZYAKUP to fill in. I rate that boy highly from what I’ve seen of his performances in the reserves.

Even though Chamakh is out of form, his hold up play is still excellent and if Rosicky can score then Chamakh can surely score a goal.

Even SAF gave up on Hargreaves.

Where’s he go? City on a pay as you play contract. How much have we seen of Owen? Maybe a Carling Cup game against our youngsters, who tore him up.

I say we keep believing in the team, even if we’re 4 goals down, anything’s possible!! I know ppl r gunna say I’m just being optimistic, but it doesnt matter if don’t qualify, show the team we believe them, and they will play at their best. And it’s not just RVP who can make something happen, the WHOLE team can!!