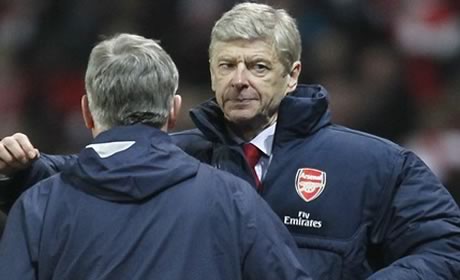 Arsene Wenger was quick to praise the spirit and character of his side after a third injury time win in four Premier League matches.

Following the wins at Sunderland and Liverpool, Arsenal left it very late to claim all three points against Newcastle this evening, and the manager says it’s a sign that this is a team that will fight all the way to the final whistle.

Speaking at his post game press conference, Wenger said, “That is the best response to something that has been questioned sometimes this season. I believe that shows we have quality, we have spirit, which I have never questioned.

“It was a relentless effort again tonight from the first to the last minute. The tempo was absolutely top level tonight. We kept going until the last second and just managed to win the game.

“Certainly the fact we have done it before helped us. Even when we were 1-0 down we just kept going and we feel now at the moment in the team we just have that complete and total commitment to do as well as we can and give absolutely everything.

“We played recently against Tottenham, Liverpool, Newcastle and Sunderland who are all very difficult to beat and we won all of these games. We know every time it was very tight and we won in the last minute in three of them.

Asked if he was confident of catching our North London neighbours, the manager rightly took the focus off them and back onto us, saying, ” I don’t focus on Tottenham. I feel what is at stake for us is our commitment and that’s all we want to do.

“I don’t compare us to any other team, I just think we have rebuilt confidence and belief and that will be vital in the race until the end.

“It can change very quickly because as soon as you lose a little bit of urgency you are in trouble in this league. So let’s focus on keeping that and after we will see when we finish.”

And on the team and how they’ve reacted, he said, “The atmosphere is great within the squad, and tonight it was exceptional in the dressing room because the pleasure is even more intense when you win in the final minute of the game where you have given everything.

“It’s very important that we keep our feet on the ground, keep our complete focus and give absolutely everything until the end.”

He might not then have called Alan Pardew a twat but in our heads he did.

Spurs self-destructed after Capello quit. Why did Capello quit? Exactly. We’re finishing 3rd and it’s all thanks to Cunt Terry ;D

I'm john Terry and I'm a CUNT
Reply to  Camilla

U r a moron sir. Spurs beat nufc 5-0 after capello quit. Spurs lost their confidence after arsenal destroyed them in the derby.
It’s arsenal’s doing.

The rumours didn’t start until later. Although I’m glad we definitely sunk them waaaay deep into despair.

I also love that you’re calling someone with the screen-name Camilla “sir”.

i cant find any better time to praise the character and spirit of the team considering how the season have been. I really trust in wenger, gooner till i die.

I love it, when after weeks of negative articles, and so many plastic fans calling for ”at least 7 world class, marque signings” that we have dug down deep and found a winning answer all by our selves. with the same team and the same manager.
I’m a massive optimist when it comes to arsenal, but I never believed we wouldn’t drop a single point in our last 5 games! what a run!

well done lads. and here’s to pushing on to 3rd.

goontang
Reply to  bob's your uncle

Well we made 1 marquee signing this week! Tomasss

Yes. Absolutely. LANMS Like a new marquee signing. JW could soon be another one. Slurp!

Fantastic win and what a performance this last few games.

I am forever optimistic and really think Wenger can deliver us more trophies. My only frustration is where was this Arsenal from the start. I know we still have 3rd place to play for and CL football, but it feels like the “handbrake comes off” once the trophies are out of sight… maybe I’m just finding the only negative of the last few games, but surely some will agree?

Worryingly, I have noticed a trend over the years, that is when all the pressure is off and we’re not expected to do much any more we do well. That has got to stop.

Great character tonight…rosicky or walcott were my motm. I still feel we could have a couple of extra signings for depth in the squad

I hope the spuds end up like portsmouth…..and they wanna spend 30 mil on hazard…lolz….
i know spurs will fuck up next year if not next year….so i would love if chelsea finish 5th and spuds 4th…that would destroy chelsea’s financial model…..

In all seriousness, there was a time when arsenal would go behind in a match and fucking cower in that shell of theirs. But I like the new arsenal that gives teams head starts, before deciding to fuck shit up and win in the last minute of stoppage time.

We should build on this for next season, get rid of some of the player that holding squad numbers and sign four players to nurse us through all competitions next season. I would say the out players Almunia, Squillaici, Chamakh, Park, Denlison, Bendtner , Villa, Arsha and assit Diaby fitness once and for all and see if he can still play with no pain or injury as with the 25 squad players we can not carry any passengers to play in four competitions. Players in Podolski, Hazard, N’Zonzi (tall strong and can play a little for the EPL away games… Read more »

nzonzi is a surprisingly decent player

I agree. Just like Rodallega, he deserves to be in a much better club. Mid-table at the very least.

Just watch him more and you will see what I mean and why I said the away games with the less technical sides. But, if you don’t like him, who am I to disagree 🙁 .

My bad I read the least as best.

I must be forgiven, the beauty of TV5 goal blinded me 😛 .

P.S.
I was going to say your beauty but that would have been toooo smoooth and toooo obvious :).

Hazard is whoring himself to every club. What’s up with that? I don’t want him. He could pull a Na$ri anytime, show him some money and he’s gone just like that.

what a bunch of twats,
arsenal fc
by far the greatest team the world has ever seen,
do you watch football you mug?
things aren’t looking to good for the remainder of the season if you have scraped thats scraped wins in 3 of your last 4 in te last min fucking mugs

Certainly better than lost 3 out of your last 3, right ‘Arry?

Haha suck it up Sp*rs fan! Love it!

Awww, poor Pyato’s just mad because he’s found out that his mind the gap shirt he put all .50p of his savings on is non-returnable. He’s understandably angry about this so lets give him some space…

More derpy – derp tripe from the wrong end of the SSR.
Mind the drop off that narrow cock perch, dickhead….

Aww diddums… Little Pyato’s Mummy let him have a go on her ‘big person ‘puter’.

He must have run the batteries reeeeeal low on his ‘Dora The Explorer read and learn’ .

“Well done, son. You know what that means!? Wimpy for your 21st next week!”

“Yaaaaaaay! Can i wear my Spiderman bib!?”

I have to say that I think all of the fans have rediscovered what it means to be a Gooner. The spirit of the cannon runs through the players, manager and fans again.

and thank you Rosicky.

Btw I saw my spuds mate, I didn’t gloat just said high and gave him a high 5-2!!

Interesting that team spirit seems to have increased since arshavin left on loan.

Like a badass Belgian T1000, with 2 lasers – one mounted on the forehead, the other on the shooting boot.

When we produce performances like this, it does make me wonder why we cant play with similar verve & temerity on a consistent basis. You could see tonight that the team were up for it – pressing, winning second balls (Ba did well in the air), putting in full blooded tackles all over the pitch, running off the ball for team mates – if this was the case week in week out, we would not lose to the lesser teams in the league. Against the very good teams, you sometimes need something extra. I agree with ‘Cygan’s Left Foot’ over… Read more »

So what if they have a better run-in? Some of those teams are fighting for their lives. You think they will just roll over for Spurs and not put up a show? Huh, have some faith will you

Sp*rs can fuck off!

Arsenal 2-1 Newcastle: “Come with me if you want to win” ‹ Arseblog … an Arsenal blog

[…] deserved for an Arsenal team that really did make all the running and all the chances. Afterwards, Arsene said: It was a relentless effort again tonight from the first to the last minute. The tempo was […]

TV’s the gooner Chuck Norris but the main protector for me is Kos. He did it again last night. Not as fearsome as TV but he gives his all every single match. The boy would put his hand in a blender for us. Loving it.

I’m amazed at just how shit Talksport is. I turned it on for the first time in about 2 years, that alcoholic scot is still doing the breakfast show with a cricketer, they are trying to understand what happened between RVP and Krull, they interview David O’Leary and George Boteng but no-one could work out what happened. Are they stupid (don’t answer that), Krull wasted time from midway through the first half and Robin was pissed off, he obviously reminded Keull he’d wasted his own time once we scored. I think they need to record time wasting in a different… Read more »

You got my vote at ‘They are cunts’.

The way I saw it Krul made a habit of standing over the ball after everyone had buggered off upfield for the clearance, forcing RvP to trek back and force him to pick it up.
Then he got all stroppy ‘cos Robin stayed stood in front of him and with no defenders back to chuck it sideways to, he had difficulty clearing the thing.

So he wound himself up. What a dick.

Kenny Dalglish has launched an impassioned defence of his record at Liverpool, claiming he should not be judged by the club’s league position alone and that kit deals are as important as victories.

Dalglish sacked in the summer, scousers turn on the yank owners and blame them for everything.
Normal service resumed on Merseyside.

Fuck dalglish now he wants wenger done for calling the racist a diver, trying to take the pressure of himself because he knows his CL spot is gone the whinging prick ,hope the toffees fuck yous tonight