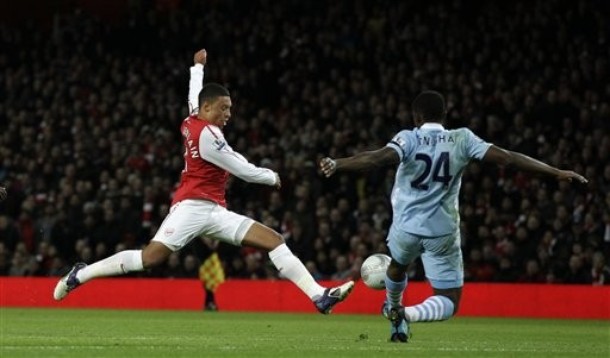 Despite starting Tuesday’s Champions League against AC Milan in the centre of midfield, Arsene Wenger doesn’t believe that Alex Oxlade-Chamberlain is quite ready to play there on a regular basis for the club.

In midweek the manager’s hand was forced by injury with the Gunners missing Mikel Arteta, Yossi Benayoun, Francis Coquelin, Aaron Ramsey, Jack Wilshere and Abou Diaby through injury. And The Ox was deployed not as an attacking midfielder, but in a deeper lying role quite similar to the one that Jack Wilshere was used in last season (but not this one, boo hoo).

The boss is sure that the talented youngster will eventually end up in the centre of the park, but not just yet.

I don’t think he is ready to play in this role personally but he will certainly develop into it in the future,” he told Arsenal Player.

“He will play [there] again but I think he has to play where he is needed basically. The most important thing at the moment is that he develops well.

And the manager was quick to remind both the player, and the press, that it takes that hard work to make it, saying, “You are not a star after five or 10 games, let’s let him play 100 times and then we will talk again.”

When you look at the players who have been hyped, and believed their own hype, those are words that The Ox should pay attention to. Nobody wants to see another Jay Emmanuel-Thomas, although clearly Alex is a different character and a much more level-headed and grounded young man. And he can spell.

May the Ox be with you!

The boy is already a class above Jay Emmanuel Thomas. He was a fucking waste of talent and the Ox just has an amazing attitude to go with his ability.
He’s already played more first team games than JET ever did so I think they’re not really comparable.
Whatever position the Ox ends up in, he’ll excel. He’s that type of player.

He’s got so much talent that he can probably play anywhere. But I think that wide right in the midfield three will be his best position. Remember: he’s a great crosser of the ball, you don’t want to lose that be keeping him in the middle. He could even make a great out-and-out winger in a 4-4-2 for England or us.

I can’t wait to see Podolski, Wilshire and the Ox all start together next season.

not forgetting van the man of course, a gooner for life.

I know dreamy isn’t it….

no doubt bro … i had the younger folks in mind

And the rock on which other teams’ midfields smash themselves to pieces in an ineffective and highly amusing manner.

can recall sometime in the 05-06 season when Song was so infuriating a friend was convinced Arsene was dating his sister hence his selection. What a magnificient player he has blossomed to be. He needs to be more consistent though.

Great talent.
Would like to Gotze added to the midfield over the summer

Are there actually gooners who wouldn’t want to see Gotze at Arsenal? 0.o

Off-topic, but does anyone know anything about Song’s contract? I’ve heard that it’s up in 2013, but it hasn’t been reported on.

Keeping Song would be almost as crucial as keeping RvP.

There’s been a couple of idle mentions, but Song isn’t exactly a player who sells tabloids or provokes ferocious bidding wars, nor has he been agitating for a move since he seems quite happy playing almost every game – so it’s not exactly news. More like “Oh btw, Song might sign a new contract next year I guess.”

Of course Ox is the more effective striker… Chamakh and Park aren’t strikers!

Am I the only one who recalls a number of fans around this forum bashing Wenger for signing this kid not too long ago? Well? Just me then?

I didn’t bash Wenger for the Ox signing. Nothing wrong in investing in potential talent but criticising Wenger for not signing world class players in the midfield and striker department is justified IMO