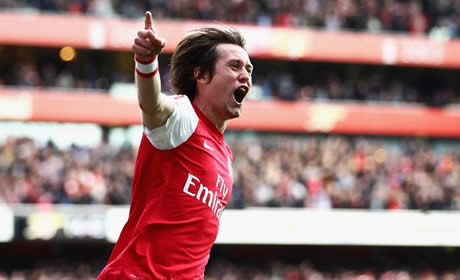 Everyone at Arsenal seems to love Tomas Rosicky. Arsene Wenger declared his love for him a few short weeks ago, Robin van Persie was next on stage to big up the Little Mozart, and now Wojciech Szczesny has given his two cents on a man many had given up on.

His litany of injury problems and two years without a league goal hardly augured well for his future but his displays in recent weeks have hinted at something of a renaissance, the Rosicky of the last few weeks has been the Rosicky of old (perhaps as old as Dortmund, but still).

“He has been fantastic for the last few weeks now, scored a great goal against T*ttenham and was my man of the match in that game,” said Szczesny.

“He was great again here and hopefully he can keep going because when he plays like that he is a fantastic player.

“He can take people on in the middle of the park too. I think we dominated the midfield in the first half and he made the difference. He is fantastic.”

In a profile piece on The Guardian, Amy Lawrence quotes Cesc Fabregas, one of Rosicky’s best mates while he was at the club, speaking about injury problems.

“I have spent a lot of time with him and I know how he feels,” said the former captain. “I know what he wants and I have never seen a guy being so committed, so professional and never giving up. If this happened to me I probably wouldn’t want to talk to anyone, I would be always down and angry.

“But he’s unbelievable. He’s the type of player you enjoy playing alongside and as a guy he’s amazing. He has been through a lot. I told him to be strong and to keep believing in himself and that he could play football again.”

Rosicky’s injury was so rare that it is now the subject of case studies. Basically a tendon lifted away and then sat back down in exactly the same place, so on scans etc it looked as if everything was normal. He’d try to play, he’d have pain, play, pain, vicious circle, until he was opened up again and they realised what had happened.

At 31 he has probably been robbed of the very best years of his career, but having spent so much time out perhaps he’s got a bit more left in the tank than others of the same age.

With a crucial league run-in to come over the next couple of months let’s hope he can stay fit and this old-style Rosicky continues to contribute.

Very interesting – I never knew that about his injury. Let’s drink to whatever House MD figured that one out.

or maybe they finally outsourced , you know proper Doctors

Not sure how you can blame our medical staff for not diagnosing an injury that is so rare, it’s the subject of case studies.

An inspiration to all long-term injured at Arsenal.

Even though he scorched the US in that ’06 WC game, Rosicky quickly became one of my favorite players. Hopefully, the injury bug is behind him, as well as the inconsistent performances. If he can play at this level for a couple more seasons, I’ll be more than thrilled for him.

He is one of my favourite players. Such a shame that it missed those so-called ‘peak’ years. Hopefully he’s got 2-3 more years in those legs and he can help Ramsey, Wilshere and Ozyakup develop.

Where is his Jerry?

I guess his best partnership came with hleb. They both use to combine so well with eachother if one misses out the other had a off day. But they really were good together , remember his goal against liverpool when hleb played him and he took shot with his first touch and ball loft pass reina.
I like his clever turns .

I’ll never forget that game. I do have to say though that his return is the epitome of LANS. He truly deserves a good season and it’s coming good for him. I want to see many more tremendous seasons for Rosicky whether it’s with Arsenal or not. He is a true professional.

Hopefully lessons have been learned that whilst we always seem to have good youngsters coming through, they do need that bit of experience to look to when the shit’s flying about on occasion.

I pray to God he stays fit.

I pray to giraffe he stays fit.

I gay to Prod fit he stays

I don’t pray at all, I just wish great players like him the very BEST of luck.

Tomas Rosicky had been my favorite player since that goal against USA ’06. However Hamburg and Anfield only made him more loved. I loved him throughout his torrid injury and knew he would come out stronger. So happy to see him finally get the credit he deserves. He’s a true champion and my favorite player by far.

Did Woj censor himself in that quote to say “T*ttenham”?

you’re not funny you fucking prick

I thought he was quite funny. A bit.

Bob's your uncle
Reply to  bdzfds

Like someone said above, if he continues how he is he is certainly lans. This is a guy with the talent to start in our midfield for a few more years yet and I will be thrilled if he can. By then Ramsey will have a lot more experience under his belt.

Jack, Ramsey, Ox and Ryo will learn from Little Mozart on and off the pitch. I have yet to hear one say a bad word about our Little Mozart, I love his fighting spirit and his captain material, just look at his nice gesture to RVP after he missed that chance. We have a lot of young players and they need an old head with experience and class like him in the dressing room to look up to. Give him two or three years contract as he missed a lot of football through injury, he could go on for another… Read more »

Wow, I had no idea about the circumstances surrounding his injury. Puts his whole career in a new perspective for me. Imagine the struggle he must have gone through, fuck me. Well done Arseblog for providing depth. Perhaps it was common knowledge, but I’ve never heard of it. He’s definitely a keeper if he can stay fit. He’s first XI material at Arsenal right now but will eventually be replaced by Ramsey, though i certainly wouldn’t mind signing him up on a long-term deal. Look around at other top clubs in Europe and you see that they’ve got older guys… Read more »

“Imagine the struggle he must have gone through…” Well, when he came back I saw an article in which his agent was quoted as saying that he’d given up on Tomas and believed his career was over. Apparently the only thing that kept Roz in the game was that Arsene told him that as long as he was prepared to stick with it, he was happy to stick with him. I expect him to stick around until Le Boss decides it’s time to let him go. He comes across as someone who knows very well that every cent he’s earned… Read more »

Sing us a song, you’re the piano man
Sing us a song tonight
Well, we’re all in the mood for a melody
And you’ve got us feel alright…

Sorry, I know it’s got nothing to do with our little Mozart but Graham Taylor is a bias fuckin prick….

i remember when we all expected Tom to unleash some 40 yard blockbuster screamers that leave the keeper flailing at thin air. Then I saw Tom stroking the ball round effortlessly and accurately with the outside of his foot. Then we didnt see him at all 🙁 but now we see Tom powering through midfield, turning and passing under pressure, taking control, taking responsibility in the middle, trying to make things happen and most importantly, playing his heart out. i’m not going to go into comparing Rosicky to Ramsey but i know who I would have on my starting XI… Read more »

Largely off-topic, but has anyone seen the schooling Bilbao are giving Utd at the moment in that Thursday kickabout thingy?

I´d like to think Arsene is there scouting some of their players. The Basques are a tough breed that tarvel better than your average Andalucian (i.e. Reyes)…

Quite right jollygunner but Graham Taylor is still a bias prick…!!

Yeah, Bilbao are destroying Utd as I type, delicious to watch. They’re lucky not to be 3 or 4 nil down, but I always say that about the scum from Salford. And Graham Taylor is ridiculous. Absolute cunt, he may as well get down on his knees and suck ol’ Red Nose’s shrivelled cock for all it is worth. “Do I not like that” indeed. Back to topic, I’m seeing rumours that he’s looking to resign a new contract. Funny that, I’ll be the first to admit that at the start of the season I’d have shrugged and happily waved… Read more »

I almost disagreed with you on the midfield but then I thought about it and you’re right.

In fact next season with the ‘Return of the Jack’ things are looking positively bloody brilliant in midfield.

Defensively I think we’ll be a lot more solid as Per will have bedded in properly and hopefully we won’t have 3/4 of them injured every ten minutes.

And if we get Podolski (and keep VP) we have Campbell also on his way back.

There is no reason why Rosicky can’t play at the top level for years to come. He can have a massive contribution to this club, his pace and acceleration at 31 is phenominal, although i think he uses his inteligence to make it seem like he’s alot faster than he is which ables him to beat that first man.

Sign the guy up, we need a veteran midfielder to stay with us for many years and retire at the club. Rosicky is that man.

I saw an interview with Rosicky almost 3 years ago and at the end all he said was “i just want to play football……”
Have had a soft spot for the guy ever since.

Just seen the picture on Arsenal.com wIth title Few can cope when we are
on form.
Everyone going mental after a goal…….except Park.He is just sitting and thinking
why am I here,what’s the point

[…] SZCZ joins the love-in for Tomas Rosicky who is close to finalising a one year contract extension with the club. I’m for it and while […]

[…] for today, it seems no Arsenal blog is complete at the moment without praise for the form of Tomas Rosicky. Today the applause is led by Wojciech Szczesny, who according to Arseblog News […]

[…] performances of late have been nothing short of sensational and these views have also been shared by his team mate, Wojciech Szczesny: “He has been fantastic for the last few weeks now, scored a great goal […]

Our Team is full of legends! Everyone ones a fucking legend!

[…] performances of late have been nothing brief of sensational, and teammate Wojciech Szczesny shares that view, saying &ldquoHe has been amazing for the final few weeks […]

[…] performances of late have been nothing short of sensational, and these views have also been shared by his teammate Wojciech Szczesny: “He has been fantastic for the last few weeks now, scored a great goal […]

Little Mozart « Across the Six

[…] lead the way in singling Rosicky out for a praise. Everyone loves Rosicky: Wenger, Van Persie, Szczesny, […]