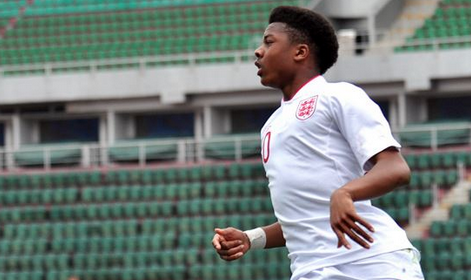 With this season’s Premier Academy League title no longer in Arsenal’s hands, attention is already beginning to turn to the next campaign and the exciting new crop of individuals which coach Steve Bould will have at his disposal in 2012/13.

Several members of this contingent have spent this season training full time at London Colney and so should not find the progression to the under-18 side too difficult a challenge, whilst others have spent this year completing their studies whilst also turning out for the club at under-16 level.

Two of the most prominent individuals in this group are Chuba Akpom and Jack Jebb, who are both graduates of the club’s Hale End Academy and have both represented England up to under-17 level. Both players have also been something of a regular presence in the under-18 squad this season, despite still technically being schoolboys. Akpom, a skilful attack minded player who can operate anywhere across the attacking line, scored a crucial late winner against West Ham back in December and followed that up with another strike in the 5-0 trouncing of Portsmouth. Central midfielder Jebb, meanwhile, has recovered from an injury that kept him out over the Christmas period, but, when fit, has shone with his vision and passing ability.

Left-back Brandon Ormonde-Ottewill received a shock call-up to train with the Arsenal first-team squad prior to the first leg of the Champions League tie with AC Milan despite having made just one appearance at under-18 level. Quick and a good crosser of the ball, he should feature more regularly next season, as should hard working forward Austin Lipman, who has been in good goalscoring form for the under-16s throughout this season.

German centre back Leander Siemann, signed from Hertha Berlin last summer but as yet untested at under-18 level, will look to prove his worth next campaign and will surely benefit from working under the tutelage of Bould, whilst goalkeeper Josh Vickers has been an unused substitute on several occasions for the under-18s without featuring. In the meantime, he has made some good saves at under-16 level and should receive some game time with the older age group next season, although the current custodian at that level, Reice Charles-Cook, may still feature as an overage player.

In addition to the acquisition of Siemann, two players have also been recruited from much closer to home. The signing of tricky winger Tarum Dawkins from Luton Town attracted some publicity, whilst the club have also signed centre back Tom Dallison from West Ham. Both players will be eased in slowly to the set up, but will be hopeful of being regular starters for Bould’s side by the end of next season.

The final three scholars are all graduates of the aforementioned Hale End Academy. England under-16 winger Alex Iwobi, the nephew of former Bolton player Jay-Jay Okocha, is one to look out for with his speed and trickery, whilst Alfred Mugabo, also a winger, travelled to the FIFA U-17 World Cup with Rwanda last summer. Arinse Uade, a Nigerian-affiliated defender who can play at both centre-back and left-back, completes the set.

Good luck to them all, here’s hoping we pump out some more like Jack.

Some great names being thrown out there. Good article thanks.

I love jeorgebird. Probably the best decision ever getting him on board for arseblog. It amazes me that YoungGunsBlog is doing well for himself now when most of his opinions are stolen. He’s also a poor writer.

Been following jeorge for a long time now and his articles are always well written and original.

Its great that you like a particular writer. But don’t bad mouth another Arsenal blog for that. YGB provides some great coverage, and remember, its an Arsenal blog so its OUR blog. United we stand ..

Great article, and some great insight into how some of the young gunners are doing!

The bloke is more interested in making up tripe on Metro than Arsenal. Fair play to him if he’s making a living but let’s not pretend he’s an Arsenal blogger anymore.

Like you say though theres no need to make it personal.

YGB has a nice twitter account though lol. But i agree, his blog has kind of died.

I miss young gunns blog, his twitter is catered for a wider audience, not just as gooners, although he still provides decent updates its not to the same level as before.

Alhamdollilah!! I cannot epserxs how happy I was to see this happening in lil old m’boro This really is the start of something great in the north east inshAllah!! May Allah swt reward all those involved in making this possible, ameen!

As a Nigerian Gooner, I’m stoked that we’ve got so many products coming out of Arsenal’s academies. Chuks Aneke looks good already, and hopefully, we can show him it’s better to be a Super Eagle than a lion. Hehehe. If Jay Jay’s nephew has 1/100th of the great man’s talent, and he works hard, he could turn into a frightening prospect for opposition defenders in the years to come. Sorry to ramble on, I know how much Blogs hates international football, but I can’t help being glad we’ve quite a few players learning the Arsenal way. If they come good… Read more »

There’s a long way for them to go for them. Hope the talent like Jack comes up next few years.

Jay-Jay Okocha’s nephew? If he has half his skill he’ll be ace, JJO was always far too good to deserve being managed by Sam Allardyce.

I can’t wait for the Sp*rs tour of Iraq.

Sp*rs vs Al Qaeda FC would be a match I’d pay to see!

If gareth bale dived there.

Blogs, I know this has nowt to do wiv above subject but I keep meaning to ask this question so before I forget, What is with the adverts for “Road Kill” t-shirts? I may be missing the pun somewhere or even an ironic message perhaps, it baffles me because as you know the high number of road deaths we have in this country is very worrying, though admittedly it has reduced considerably in last year or two, and to think for the sake of ad space being welcome income I’m not all too sure said company is suitable. Please correct… Read more »

well its google adds dude, so they change whereever you may be situated. while im in denmark i get cheap flight adverts going to england etc.

admin / I should note again that 1 and 1 is not a good host if you are doing aihytnng complicated. I don’t recommend them to any of my readers EVER. I can’t count how many times I’ve had a client using 1 and 1 that we had to switch to a real host The ONLY reason I’m suggesting this is that DW 4 is a great piece of software . and you can’t beat the price to get it.Please leave a comment with your experience with 1 and 1 getting your copy, how it works, etc .