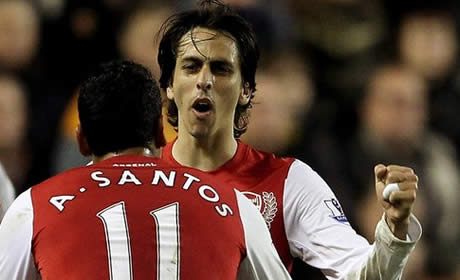 Both Arsene Wenger and Yossi Benayoun have highlighted the importance of Robin van Persie as Arsenal look to secure third place in the Premier League this season.

It is still in Arsenal’s hands after this weekend’s results and two wins from the final two games would secure the coveted third position, and Arsene Wenger is looking to his free scoring captain to help the team finish the season well.

“He has to push us over the line. There are two games to go. We have been a bit over-reliant on him, I concede that. But it is difficult to change that before the end of the season.”

Meanwhile, Benayoun says the team need to provide van Persie with the chances he needs, and says the skipper reminds him of Fernando Torres (in his pomp, not the fat necked fizzler he’s been for the majority of his Chelsea career).

“Every game at Liverpool we knew he could score. We know we must give Robin the ball in the right place and he will score. That is what we did against Stoke and he has been doing that all season.”

And while the Dutchman is the most likely source of goals in the team, it would be nice to see those around him try and take on a bit more responsibility. Goals from other sources can win games too, something to think about ahead of Norwich.

This must be rectified in the summer. We can count ourselves very lucky that RvP managed the whole season uninjured, can’t bank on that again.

I hope the rest of the library sang along with you. It did, right?

Daamn, Yossi is such a luxury to have this season. I hope we can see him start again in the last 2 games. Class act.

Wait. So other than van Persie, our other 2 recognized strikers – Chamak and Park – have exactly one goal between them?

And how much did that goal costs in salaries?

As a few of the comments above have already stated, we need to do something to lift the weight off our cap’s shoulders. Playing at the level he has this season with the expectations of the masses is not something that, in my opinion, can be sustained. I shudder to think of our situation this season sans RvP’s stellar form. Lets hope that we’re lively in the transfer market. That said, i really hope Yossi stays on. He’s a joy to watch. It won’t be in his best interests keeping in mind the return of our injured/on-loan players but, he’s… Read more »

Not enough goals from midfield we need a goal scoring midfielder easy to say but hard to get one.

We have one. His name is Jack Wilshere.

He’s not a goal scoring midfielder – or at least hasn’t shown that yet at senior level.

I think once Ramsey sorts out his finishing and composure he’ll score 10-20 every season. He gets in amazing positions.

I know its wishlisting, but i think that Gylfi Sigurdsson would be a great asset to this Arsenal team. A free scoring midfielder, whou likes to shoot from distance, and who is also a free kick specialist. I would love to have him in our team.
It would add so much in terms of options and depth, plus, he would cost around 10m euros.
I would have him start in the position Rosicky has played this season, as the more advanced midfielder. Maybe altering between him and Rosicky, depending on the game?
What do you guys think?

wenger.one more season for yossi please.i beg you on behalf of fellow gooners.he still can play at the top level.man i wish he gives his best next year and then he is free to get his playing time anywhere.

podolski is coming to the red half of north London next season and jack wilshere is coming back. and we will get a new and improved Arshavin. and our own monster the `BFG` joins the list

New and improved arshavin? That’s just going backwards.
Any effort the bloke put in would be an improvement as he was starting from a very low base.
Hes had his chance in an arsenal shirt and decided not to work for it, he can stay in Russia.

The biggest disappoitment from a goals point of view is rosicky. its ironic that he.is having his best ever season for us yet his worst in terms of goals. he really needs to bring that back to his game i am certain that if lansbury played in that position he would score more and assist just as many. wenger obviously has no faith in park or chamakh. he has no faith in using arshavin in his best role either. all 3 should join bendtner and vela in leaving this summer with at least 3 replacements. i would also like to… Read more »

The failure of our midfielders to consistently score goals has really hurt us this season. The misses of Gervinho and Ramsey in particular have cost us dearly.
RvP simply has not been supported in the way that he should have been.

Podolski will help next year. But I would really love to see Wenger sign a goalscoring wide player to replace the average Walcott.

I would love to see Robben replace Walcott

That would be brilliant. The problem is that Wenger won’t pay the wages that top stars like Robben demand.

Get rid of the main supply line to RvP? Do me a favour.

Walcott can, and will, get better. There is a reason why our captain praises Theo every chance he can get.

I agree about Gervinho. Nothing I have seen this year convinces that he is good enough.

Has RVP ever been subbed this year/season? Isn’t it odd that Wenger never takes him off regardless of the score? Not complaining, just observing.

It’s a reflection on hoe poor are subs are!

It’s a reflection on how poor are subs are!

It’s a reflection of how poor our subs are!

who can we bring in to score goals from midfield?
I like Erkison and i think he will score more goals than Ramsey/Rosiscky

I get the feeling Gervinho will be much more of a threat next season, he’s looked tricky at times, and started well with some good assists, the only problem is another African cup next year. Not only do you end up paying a player to play for his country for 6 weeks, but it seems fairly common that they come back banjaxed for the rest of the season.

I actually like a lot of what Gervinho does, but his goalscoring ability is absolute wank. He can’t justify a regular place in the side when his finishing is so poor.

I like Gerv, he does have a touch of the wiltords about him though – the headless chicken thing when he runs into blind alleys

We need goalscorers in the team despite what rvp does in terms of a contract. The fact that we went into a season with an upto now injury prone main striker in rvp and backed him up with chamakh and the invisible park was a huge gamble that has thankfully paid off, had it not then 3rd place would not be their to be fucked up by us. In a team whose midfield struggle to score goals it was a crazy decision and one that could still bite us in the arse come the end of the season. All it’s… Read more »

He’s brilliant and all but the thing is, with all his talent and all the attention that he’s garnered, he won’t come cheap. I reckon he’s in the top 3 goal scorers in Ligue 1 as well this season at Lille. Arsene isn’t really the type to splurge but i’m sure a player like him will pay dividends once he clicks.

It’s definatley something that needs to get addressed in the off season, but for now, all guns blazing towards Third Place.

I agree with what a few people are saying about Gervinho, needs to (and hopefully will) step up his game next season.

Reading that FC Cologne have confirmed Podolski is coming in the summer, so that should spice things up a little/ take some “pressure” of RVP to score goals…

When the hell did Chamakh score?

[…] Wenger and Israel captain Yossi Benayoun spoke about the over-reliance on Robin van Persie at the moment. While admitting that they have relied on the Dutchman, more than they should, this […]