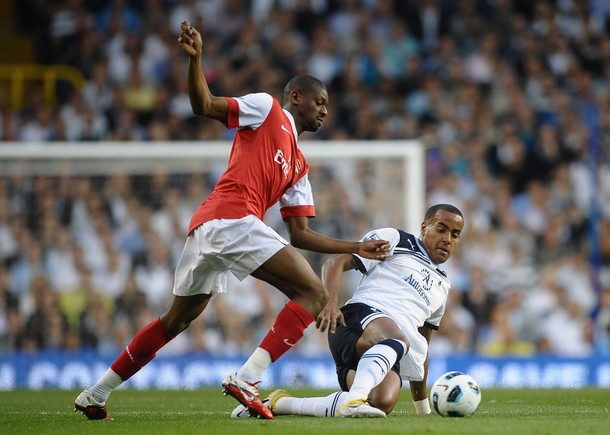 Arsene Wenger has confirmed that Abou Diaby will be included in the Arsenal squad to face Chelsea on Saturday after ruling out Mikel Arteta for the rest of the season.

The Spaniard, who sprained his ankle against Wigan, will likely be replaced by Aaron Ramsey in the starting line-up with perennially injured Diaby ready for a cameo performance from the bench.

Speaking to Arsenal.com ahead of the vital Saturday lunchtime kickoff, the boss gave an update on the status of his squad’s fitness while also confirming Laurent Koscielny would return after suspension.

“It is season over for Arteta but he doesn’t need surgery, which is what we were scared of. So he will be out for six to eight weeks. It is an ankle problem but just a sprain.

“Diaby is back in the squad. He played one half on Wednesday [in a friendly] and he will be alright now I think. We still have to be a bit cautious with him because we had so many setbacks. If all goes well he will be in the squad.”

Yossi Benayoun is ineligible to play in the fixture, while young enforcer Francis Coquelin is still not match fit.

Frustrated by his side’s slip on Monday, Wenger made clear that with four games left of the season there was no more room for mental fragility.

“We had a little blip twice I believe for mental reasons,” he told Arsenal Player. “Maybe subconsciously we thought, ‘Ok, maybe that would be a little bit easier’ and if you do not keep a clean sheet against these teams then you put yourself in trouble.

“You give any team in the world a two-goal advantage and it is difficult. Many times we have come back but not always.

“I don’t know [how many more wins we need], we just want to win the next one. I believe our target is just that. We have to think that we have been on a great run, we have a fantastic opportunity but we also just need to focus on the next game and win it.

“Only the third place guarantees you to be in the Champions League anyway.”

You should concentrate on spelling and not slagging of our team. He is clearly not deluded when he has admitted his short comings. Ramsey is one of the hardest workers in our squad but if we are not careful idiots like you will drive him out.

May the god of the dead strike you now

I think it’s absurd how much criticism Ramsey is getting, but this comment suggests maybe it’s just a small sect of supporters that.. err worship the god of the dead ?

*god of death, dead is the adjective form of the word,

He’ll start and we will win , If there is anyone capable of replacing Arteta ,then it’s Ramsey.

I expect Song-Ramsey-Rosicky midfield to get us a strong finish , Like Song-Arteta-Ramsey got us in the top4 in the first half of the season .

for a team with an injury record like Arsenal ,we need all players.

There was a crap player at Manure called Darron Gibson (now with Everton), the Manure’s Bully Manager kept playing him thinking he will come good one day. This crap player Gibson decided to open a twitter account. Guess what happened? He had to close it after 90 minutes due to the abuse he received. You would think those abused came from non Manures supporters!. Wrong, it was mostly from London and South East Asia. You see, Bully boy could not protect him this time, and it was his fault to keep playing a crap player (in the case of Ramsey,… Read more »

As much as people hate it , he’s actually a very important player ,he has started a lot of matches , resting him to ‘protect’ him will be suicidal AND stupid. It’s not only that he is a actually good player but who are you gonna play in his place , Diaby? talented player ,But he currently lacks match fitness ,Coquelin didn’t even train,The reserve kids are not yet ready. see ? we are left with only 3 midfielders ,like we were at the start of the season and we had to shut the fuck and support them and they… Read more »

Do I think Ramsey is a good player and he is going to be important player for us? Hell yes, he is going to make no doubt there. But the time of playing him while we know losing on the CL and finishing behind the Spuds will kill us in many way is not the right time to push young OUT OF FORM player.

I hope the lads stuff them tomorrow. I cant wait to see Abramovitch gurning in agony through his learning smile in his rotten, proceeds of crime box at the final whistle.
Incidentally, whats with all these wierd adds. Why on earth would I want ‘kissesfromafrica’ or Kittenluv from Sweden. I bet they are total mingers anyways. Probably victims of human trafficking, poor things. I like the tshirts ad though.

learning difficulty smile, that should have been.

For a while I got some adds for a wig company in sweden, long luscious hair for the girls, perfect advertisement for a football blog. Maybe blogger would get some more clicks and money if the adds were more target oriented. considering some africans come onto this site, maybe from kisses from africa would get some clicks too.

That seems to be the best line-up we can start with considering who we have available, and to me it actually looks like a strong team.

I would go with Santos over Gibbs. No real thought behind it, but from what I’ve seen from him so far, I have a feeling that he can end up being a top player for us.

I think I’d go with Gibbs, Santos can be error-prone at times, and we generally score a few goals at home, so if we can keep a clean sheet or limit them to 1 goal, we should win.

Ramsey will step up, like last time against Chelsea.

Am alright with anyone playing so long as they play well…

That said, looking forward to the guys putting Chelsea in their place and taking all the momentum out of their Barca win…would be an added bonus if they get thrashed at Nou Camp as well…

With 2 semis in the last week and another to come on tuesday which hopefully will be on the minds, We have no excuse for this one to go pear shaped.
This game is massive for us now 2 wins from our home games should see us take that third placed trophy.

2 semis in a week? That’s quite a low return by my standards. E

koscielny back is AWESOME news. what a defender he’s turned out to be. he really gets attacks going from the back. as amazing as vermalen is he’s l;poked a wee bit lost at times without kos.

chelsea will be battered after that run around on wed night (fair play to them anyway) so we really need to take advantage and hassle and probe and use our width, have them chasing us all over our massive pitch.

I agree. I don’t think Wigan would have won on Monday if we’d had Kos at the back. He has been a revelation.

I thinks that Arsenal sell Roben ven Persy becaose his in demond, clubs are offerings more money..then makes buy of better player like exemple Kato Otieno Kader, his play for some teem in Oman and is exelent at running and kicking plus his 6 years yunga..What you think?

Hard to know where to start to be honest Dakarai…

I was just about to say the same thing.

This game is gonna be 100% about defense! Whoever is in the midfield needs to help out and TV5 & Kos better own that back line. Chelsea will look to long ball and catch us on a quick turnover break with Drogba/Torres & Mata looking to exploit. I honestly don’t see Chelsea playing the ball through midfield that much where Arteta would’ve been truly needed. Chelsea aren’t anywhere near “fast” so that helps. Drogba always seems to find a goal against us. We need to score at least 3 goals (Hat-trick for RVP please!) to win. I predict 3-1 win… Read more »

What is Arsene on about- give any team in the world a two goal advantage and it’s difficult……hello, remember Tottenham, piece of cake.

Diaby off the bench to break his foot in the process of kicking John Terry in the face. Again.

Goonerhaea
Reply to  Taking The Mik

Guess we’ve had too many leg breaking experiences to joke about it… As much as I like John Terry getting kicked in the face, it’s sad to know that’s where I draw the line. sigh

Taking The Mik
Reply to  Goonerhaea

Apologies, kicking John Terry in the face would still seem like a good use of his time, though.

When’s the last time we did a season double over the chavs? Pre-Mourinho for sure. We used to have that lots number. But they’ve had the better of us for some years now.

I am thinking both teams will be cautious with the outcome a draw, 1-1, with Walcott and Sturridge the scorers. If RvP scores, I have no doubt we’ll win. But he seems to have lost his form of late.

News just in that Drogba will not be playing due to a knee injury he picked up vs Barcelona. Must have forgotten his arthritis medicine.

I know it came from an anti-Ramsey troll upthread, but I have to say that “May the god of the dead strike you now” is the single greatest comment riposte I’ve ever seen. I intend to use it in every conversation from here on out.

feygooner
Reply to  The Upbeat Gunner

I have no problems with Gervinho. Played better in the first half of the season, but hasn’t gotten back on track since returning from the African Cup. And he played a vital part when Chelsea were torn apart at Stamford Bridge this season.

For me, arriving from another league/country, he gets a mulligan for the first season.

What does arseblogger think of all this??
Oh right, i forgot he doesn’t give a hoot!!, his job is to post then leave it and laugh at the silly people taking time out of their day to comment.

Who are you? Piers Morgan?