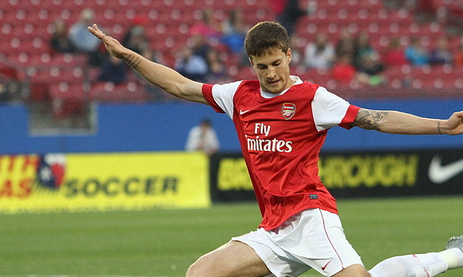 Yesterday’s confirmation that Arsenal will participate in the NextGen series next season, a competition that has been dubbed the ‘youth Champions League’, evoked excitement and there could be further changes afoot with plans underway for a restructuring of the Reserve League in time for the 2013/14 campaign.

The Independent revealed earlier this month that second string football is likely to be replaced by an U21s league in two seasons time, with matches due to be played at weekends and possibly involving the shadowing of first-team games, which, in theory, would see Arsenal play Chelsea at Reserve level on the same weekend as the two sides do battle in the Premier League.

Although the intricacies of the latter initiative are yet to be ironed out, with some debate as to how many overage players should be permitted to play, the changes, along with participation in the NextGen series herald an exciting time for Arsenal youngsters as they will test themselves against a wider range of opponents, whilst more players will receive increased game time.

Alterations to the current Reserve league format could bring an end to behind closed doors friendlies at the training ground, which have been used with increasingly regularity this season to provide game time for first-team players currently unable to cement a place in the starting line-up.

Yesterday, for example, an Arsenal XI dispatched of an Oman Olympic side 1-0 at London Colney, with Abou Diaby playing 45 minutes on his latest return from injury. Fellow first-team squad members Carl Jenkinson, Sebastien Squillaci, Marouane Chamakh and Ju Young Park also featured, as did Thomas Eisfeld, who made several impressive runs and is beginning to settle in at the club.

Gavin Hoyte, who has already trialled at Stevenage and will be released when his contract expires at the end of June, scored the only goal of the game, with midfielder Conor Henderson, who has spent much of the season on the sidelines, missing a penalty. Henderson, who made his first-team debut against Leyton Orient in the FA Cup last season, could find himself on the bench for the senior side against Chelsea at the weekend if Diaby is not passed fit given a shortage of options in midfield following Mikel Arteta’s injury sustained against Wigan.

Henderson has been on the bench in the Premier League on several occasions in the past two seasons and is highly regarded by Arsene Wenger, who is an admirer of his passing ability. A loan spell is likely to be in the offing for the 20 year old next season, whilst Oguzhan Ozyakup, another promising midfielder, could also be set for a spell in the lower leagues.

Is the Chelsea youth team for their under 30’s?

arry: “my youth players.. err.. shit, i just remember that i used to loan all good ex-arsenal players”

wenger should introduce some of the youth team to the senior team.mikel arteta will be back.

Eisfeld’s picking up quite a bit and already showing his class in the reserves even though he has only featured in a few games due to injury. Looking to get a look at him in pre-season.

Its obvious the Academy is a waste of time having produced only Cole and , maybe, Wilshere. Youth players playing youth playing on training pitches is not going to find a Manager willing to gamble playing him in todays Money dominated football market.
When Arsenal had Margate as a nursery their young players played against Southern League teams that include seasoned played and veteran ex top class players.
As a result Arsenal produced the Two Daniels,Logie,Lewis,D.Compton,Cumner,Marks,L.Smith,Bremner

Yeah because every academy is going to produce a whole XI of players. Apart from la masia it’s just not feesable, those that look like brilliant players at 12/13 can soon fizzle out. You don’t seem to realise how difficult it is to produce such great talent on a regular basis. Anyway, I’d take 1 Wilshere over 10 Bentley’s, Larrsson’s etc. I mean look at Lansbury, under 21 captain, fantastic work ethic and a great player, but he’s still not good enough to become a starter at Arsenal! On a lighter note, there’s a few in the current reserve team… Read more »

Wilshire is there since 9 so i think that qualifies. For him alone the youth system is worth it

Lets get a Arsenal B side going in the lower leagues!

Is it just me or does henderson resemble ramsey in that photo?

Yeh, sorry, that’s not possible, it is a down point with all the COD games hewevor if you think about it, it would be pretty unfair if thought from an opposing teams perspective, you two would probably stay together and back eachother up and the lot.I would love to be able to do it but unfortunately it can’t be done.-cries-