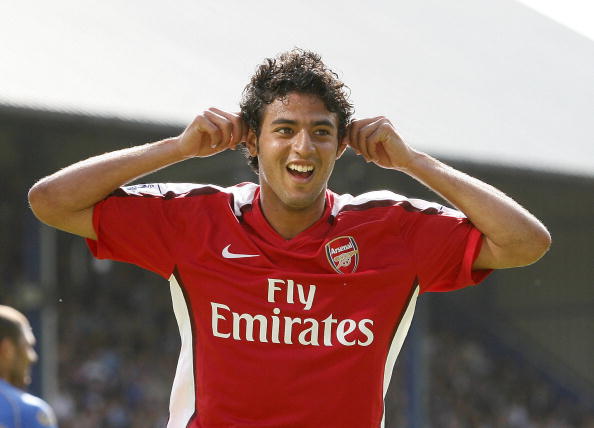 If Arseblog News had existed when Carlos Vela signed for Arsenal in November 2005 (how time flies when you’re not winning trophies), we’d probably have urged caution despite a proliferation of hyperbolic copy declaring him the greatest 17-year-old footballer since Pele turned 18.

As it turns out we would have been right to do so. Aside from a couple of low-key loans, a Carling Cup hat-trick, a swine flu scare, partying with vice-girls and a transvestite and wearing gloves 24/7, our Mexican ‘wonderkid’ has done very little in seven years on the books in N5.

A limp attacking threat when occasionally deployed as a substitute in the first half of last season, Vela was shifted out on loan to West Bromwich Albion for a few months at the beginning of 2011, before heading to Spain for the third time in August.

Playing for Real Sociedad on a more regular basis, the 23-year-old has started to show flashes of the form which brought him to the attention of Arsene Wenger and now looks likely to make a permanent switch to the Anoeta Stadium at the end of the season.

“It is true, we want the player and we are prepared to fight to close the deal,” Sociedad president, Jokin Aperribay, is quoted as saying by Sky Sports.

“At the moment things have stopped because Arsenal only want to speak at the end of the season.

“It will not be easy, but Vela wants to stay here and that could be crucial in the negotiations.”

Obviously it’s a shame that Arsenal supporters never saw Carlos fulfil his potential, but for every Thierry Henry there must be a Quincy Owusu-Abeyie. It is the way of the world…

So could this be Goodbye, Mr Chips?

Bugger. That would have been a much better headline…

Just change it. You know you want to

Yea like Tom C says, change it – who would know except us 42 posters and the erm 1,000 who couldn’t be arsed to leave a comment…

I think he chipped in with a few goals, literally. But didn’t really have the qualities to go at a player from the wing and he doesn’t have the physical attributes to play CF. I think he was bought when Wenger was playing a 4-4-2 so he thought he could be the little man RVP feeds from deep. Aaaah how things change.

Yup. Never saw him play badly up front next to someone. I do think he deserved more of a chance. He clearly improved on the wing in the season after we made the big switch, but was never given a proper go. I always thought that if he’d played all the games Arshavin did, he’d have contributed at least as much, and would have improved in that time. If he’d been given anything like the chances theo, denilson and bendtner had in the earlier days, would he have developed more quickly? I find it hard to believe that he wouldn’t.… Read more »

Someone still loves you, Carlos Vela!

good for him, the spanish leauge suits him and he will reach his peak there, something i dont think he will do in england. wishing him the best of luck and heres to hoping he puts a few goals beyond those outrageous cunts Barcelona (excepting fabregas)

wearing gloves 24/7 – yet he isn’t in his picture? You will be telling me he has never held his ears whilst running towards a camera before.

He scored a fantastic goal (NOT a chip) for Real Sociedad at the weekend. Hope that’s done something to hike the price a bit.
Pity he didn’t do that for us. Still think he’s a very good player.

” but for every Thierry Henry there must be a Quincy Owusu-Abeyie. It is the way of the world…”
Like there is more than one god??

Will
Reply to  Charlie J

I wont have any Qunicy bashing done here!

Spooner
Reply to  Will

I remember watching Quincy v Reading in the CC. He skinned their left hand side defence, then stopped to let them recover so he could skin them again, and did. A bit random, but it was a quality moment for me nonetheless.

Huge potential, never fulfilled due to liking a beer or two. waste

At last that limp dick of a player is being shunted out..
Such a lazy bastard. No idea why we kept him for so long.
Age is one thing, but the guy seemed to never be bothered.
Compared with guys like the ox and jack , you can see the difference between commitment and waiting for the pay check.

Glad to see the the back of him.

And_Arsene_Said...
Reply to  bob's your uncle

bob’s your worth, if that!.

bob's your uncle
Reply to  And_Arsene_Said...

I hate to think what we have spunked away on his wages over 7 years for practically no return. I mean we all like to party with hookers and trannies but most of us know where to draw the line, unfortunately in Mr Vela’s case, the line is probably made out of cocaine.

Would’nt like to party with trannies to be honest. Good luck to you though.

bob's your uncle
Reply to  vino

sorry for braking the hipster code

So long to our Mexican Superstar…

Not gonna be a loss. Maybe would’ve been able to play in the hole, but you could say the same for the little Russian, and we know that isn’t gonna happen.

Judging by his antics with trannies, sounds like he had plenty of experience “playing in the hole”

Are you absolutely sure that’s not Theo with a perm in that pic?

Be careful choosing your headlines! I thougt Mr. “I score only when we are four nil up!” is wanted by Real Madrid.

Thanks Carlos. Just not strong enough for the premiership. Good luck in Spain

Let’s hope that this story is true – and that this is the start of the clear-out that we urgently need this summer.

Along with Vela; Bentner, Arshavin, Denilson, Squilaci, Chamakh, Park, Diaby, Fabianski and Mannone should all go. Thank God that Almunia’s contract will expire.

With the fortune that we will save in wages, we might be able to bring in some quality to replace them. Then we might actually have a chance of doing something other than finishing fourth.

What’s Park done to deserve this? Or Mannone, or even diaby really?
Park’s situation is the same as vela’s was: he doesn’t get a chance, and so is labelled a “flop”. Mannone was always pretty good for us, and has broken clean sheet records in the championship, so can’t be that bad, and Diaby has been improving recently, particularly as a DM. Diaby is one who I could see leaving, to be fair, but only because of injury problems, not quality.

I agree generally – too many fans want to get rid of squad players, for the crime of not being in the first team. Which seems a bit illogical. But I think Park and Chamakh should go. They’re costing around 100 grand a year – you could persuade a quality striker to play second fiddle to RVP for that money.

Was never gonna be a star. I don’t think he’s built for the English league. Spain or France would suit his game better. Good luck to you Carlos & remember to try before you buy!

I’m not sure I agree that some players can’t hack it in the Prem because of their size, sessignon is similar to Vela but has the right attitude. Unfortunately Carlos seemed to believe his own hype and didn’t put it the required effort. There should be a wall of photos at Hale End of the promising players that failed to make the grade at first team level due to poor attitude, hopefully to serve as a warning to the youngsters. It would include Vela, JET, Bendtner, Gilbert, with a big gold framed portrait of Bentley in the middle.

The idea of him never putting in the effort is ridiculous. He worked hard, but was short of confidence at times, esp after wenger chose to stick arshavin up front (in a 433 formation) instead of him, when no other recognised strikers were available. He wasn’t anything like as poor a CF as people made out mainly because he has an excellent first touch – much better than arshavin’s. He had clearly improved as a winger in 2nd season we were playing 433, but still we preferred to play arshavin – who truly had a poor attitude, which is inexcusable… Read more »

I agree about the size thing, though. FFS if size were such an issue, wilshere wouldn’t stand a chance in hell. He’s got nothing of the build of vela, but he is more tenacious, and has a brilliant football brain – that’s infinitely more important than size, in any league.

That’s right. Size doesn’t matter. I just asked my girlfriend and she agreed. Then she cried a little???

Good luck to him in Spain. I thought he could play but he didn’t seem determined to succeed.

Never forgot listening to Philipe Auclair on Radio 5 pronouce that we would never see Carlos Vela in an Arsenal shirt again after an abject display, only for him to sign a new contract the very next day!!!

That seems to happen a lot at the arsenal.

Replacing vela and Bendter with chamakh and park, I am afraid Mr Wenger you got it wrong this time!

Anyway, thanks for the chips, Carlos!

Vela is a good player but never got the enough chance to improve his game. what the hell is chamakh still doing with the club? i have really preffered bentner to chamakh. Any CF who does not have moves and footwork is just as predicatable as chamack. What was wenger thinking when he signed park? Some times it’s not the players fault but the team manager.

The biggest tragedy in the world is that despite being the same age and from the same club – we got Vela and Utd got Hernandez….

Talented. But never worked hard. Skillful. But never wanted to make it. We’ve seen many of those..

[…] one Javier Hernandez came along. He has scored 10 goals for Basque club Real Soceidad, and they want to retain his services on a permanent basis. Vela was a bit of a question mark. At times, he would make you think you are […]

[…] one Javier Hernandez came along. He has scored 10 goals for Basque club Real Soceidad, and they want to retain his services on a permanent basis. Vela was a bit of a question mark. At times, he would make you think you are […]