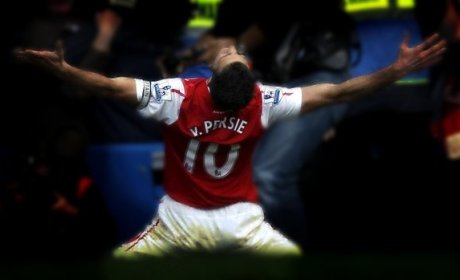 Arsene Wenger says he hopes to have Robin van Persie’s contract sorted before the skipper goes to Euro 2012 with Holland.

Robin has just over 12 months left on his current deal and has said all along that he’d hold discussions with the club at the end of this campaign. Wenger, however, wants to make sure that the situation does not drag out like it did with Samir Nasri last season.

“That will be sorted at the end of the season,” he said. “Yes, it will be before the Euros.”

Of course what Robin decides to do will probably depend on how we finish this season, making tomorrow’s game with Chelsea absolutely crucial. The Dutchman has scored a bazillion and twelves goals this season but is going through a relatively fallow period.

The manager isn’t too worried though and has played down suggestions that he’s suffering from fatigue.

“When you play 50 games at that level you suffer a little bit,” he said. “It is beyond expectation and for a striker it is massive. It will be very important for him to get a breather before the European Championships.

“Physically, Robin is good. He is not in the red zone. He has a very healthy life very focused on football – he takes care of everything. That is why he manages to do that. He is like Thierry Henry in that respect.”

Wenger also refused to engage in speculation about van Persie’s future because he visited the Barcelona team hotel on Monday night.

“I am not concerned. After the game you can go to have dinner. He has got friends there. Affelay, Fabregas. Why shouldn’t he?”

Indeed, why shouldn’t he? Once people know the papers are just making more out of a situation than is necessary, what’s the harm.

The real focus should be on Arsenal’s aim to finish in the top three, thus increasing the likelihood of Robin signing the new deal we all want him to.

Van persie is going nowhere.he is our messi

I wouldn’t mind him going to Wembley at least once next season.

Only in a red and white t shirt 😉

Heard it all before. All our best players leave thanks to Wenger’s incompetence, Bye bye Robin.

Be honest, you’re just saying that in hope that someone will tell you to fuck off and that you’re a cunt. Congrats, now you can go on to the next website along your quest to collect the most insults in one day. However, if you actually do believe what you say then you’re just fucking stupid and deffinitely not an Arsenal fan

why is my name required
Reply to  Adma

what’s wrong with you adma ? why so much negativity ? you should be proud that our Arsenal didn’t end up like livershit. we are a champions league club. we play with the best every year. and our manager is an invincible. no other manager can be called that.

whats this i see under the bridge?………a motherfucking troller

Andre Santos!!! went to see Dani Alves at the Barca hotel & none of the shit tabloids fussed about that. How could they??? Andre Santos is one of the best gays ever!

Before the Euros? Pray to Bergkamp that happens.

Arseblogger! Arseblogger, are you there?….hmmh, guess not. You just post stuff and leave for us to comment as you go on with the rest of your day.

It wouldn’t hurt to atleast give us your stand or share a thought atleast once in a while!!, now would it?

Sincerely, ‘do you even care’.

Er, I think his thoughts are in the article written by HIM.

And the blog written every single day by him for the past 10 years.

I’ve seen him comment plenty of times, don’t be a silly, if everyone reponds to everything you say the internet will most likely explode and we’ll never be able to look up doctored pictures of kim kardasian sexing a minotaur again

Er, not in this space i haven’t. Stop kissin’ ass.

sorry.. Do you have the link to the pictures of Kim K having sex with a minotaur

I’m assuming you discovered this blog (and football, and the Arsenal) only a few weeks ago. This is based on the fact that, fortunately for everyone, I’ve only noticed people telling you to shut the fuck up for a relatively short time. Now if you actually ask anyone whose frequented the site for over a month, they would probably tell you they’ve seen him leave comments. So stop being a little bitch and maybe look into some more productive hobbies

Fatcunt, if you want you’re posts answered in person by Arseblogger then the least you could do is say something vaguely intelligent, interesting, or funny in them. Go back to the Spurs blogs and ask them if anybody there can think of something intelligent to say.

Don’t worry, we won’t expect you back in a hurry.

It’s arseblog news not arseblog opinion. Ger over yourself

Stop whining Fc–you’re living up to your handle.

bob's your uncle
Reply to  Fatcunt

The last desperate love letter by a dumped boyfriend?

If he doesn’t sign, call me, I am the greatest striker that ever lived

atleast we can hire him for smashing up the cars at shite hart lane!!him,song and rvp will make a good team.

Apparently, only if you wear a mask. Had we known that you were like Batman…

Hmmm. I’m nervous about this. Part of the problem last summer was that Na$ri didn’t go until very late in the transfer window. Until Wenger knew whether Na$ri was staying or going, he couldn’t commit to the type and amount of players he would need to sign. Could this statement from Wenger be a way of saying to those who plan to try signing RVP that they should start dusting off their chequebooks now? That if RVP is going to leave, it will be done with bags of time to procure his replacement? In the famous words of Internet Joe:… Read more »

Either way it would still be good. If Arsene is saying that in case of the unthinkable (don’t even have the balls to type it) then he would still need time to do the replacements. He too must be sad he was busy on deadline day and missed harry drive around hunting for sky reporters to give an interview.

I believe will stay. The four goals he will score today will help secure third spot early enough so the contract can be sorted soon

What’s with all the abuse?, now i know how ramsey feels on twitter. Oh, which reminds me, let me head on there and pile more misery on him. You guyz inspired me, thankyou!!.

It’s like you’re not even a real person, just a satire of the worst of internet football fans

Fatcunt, while you’re over there remember to heap abuse on Arsenals number one fan Piers Morgan.

Tell me again why we want to re-sign him? Only one goal in seven games!? OMGz! You guys do know that we have Chamakh and Park chomping at the bit to play some first team games? I say sell him and then use the money to buy Andy Carroll, Stewart Downing, and a big bag of poop moulded into the shape of Emile Heskey.

Three words for you fat cunt “you are childish.” now to the important stuf. I wuld love rvp to stay because i cant think of any other religion that would satisfy my spiritual hunger for sublime finishing in front of goal week in week out.

Fatcunt – as others have pointed out, this is a news site with minimal analysis.

If you want opinion, there’s plenty of it on http://arseblog.com every morning, As there has been for 10 years.

Finally, you came….I’m new to this blog site so thank you for clearing that up. I’l stop being a cunt now.

awww bless, he only wanted your undivided attention blog, just give him a virtual cuddle. He now knows you exist ( not like that fatcunt santa, i know, i do his job) so lets all be friends 😀

i dont think your a cunt fats, Spuds are cunts………….

on a lighter note, my neighbour went to the doctors yesterday, as he was having a bit of a problem. every time he masturbated, at the climax he would uncontrollably shout ” COME ON YOU SPURS ”

The doctor replied,” thats ok sir, most wankers do! “

having seen your other posts, a have to gracefully admit that i was categoriacally wrong.

You are indeed a cunt.

[…] other news Arsene says he’d like to sort out Robin van Persie’s contract situation as soon as the season ends and before he goes away with Holland to the Euros. I don’t see any […]

He’s playing Chelsea tomorrow and is tired, so he went for a relaxing dinner with friends, THAT HAD JUST PLAYED AGAINST CHELSEA! Oh yes, incredibly suspicious. Only the media can blow something up that actually makes perfect sense.

As soon as you don’t have a lot to do your boss starts wondering if he really needs you coming in every morning and drinking the coffee. So they have to make up shit or blow it out of proportions to earn their wages. I get that. However, published opinion is not the same as public opinion, even more so in the age where information is so readily available. In short, I don’t need some cunts weaving the information into a narrative (Arsenal IN CRISIS, remember that?), I don’t believe a single word coming out of their mouths before I… Read more »

I think he’ll go if either of the two big Spanish Clubs come in for him. But he’ll go anyway if we din’t make a top four finish.

Makes this lunchtimes little encounter rather crucial. Given Arteta’s absence, I’m not hopeful.

Our Dennis,
Who art from Holland.
Hallowed be thy name.
Thy kingdom come, thy will be done,
At the Grove as it was at Highbury.
Give us this day, 3pts againt the chavs,
And deliver us 3rd place.
For you gave us power, and you gave us glory,
For ever and ever.
Arsene.

fuckin a man. this is the best thing comment i’ve read in a long while.

didnt bloody work though did it 😀

my god has forsaken me, he’s not the Messiah, he’s a very naughty boy!!!!!

It will be sorted after the date that the season ticket holders have to renew.

Report – 57,000 Arsenal Season Ticket Holders declare “We will sort out paying for our season tickets as soon as the RVP situation has been resolved to our satisfaction”

Attack terry on the counter, he slips, vp pounces, bang!!.

Funny lot, I love this blog!