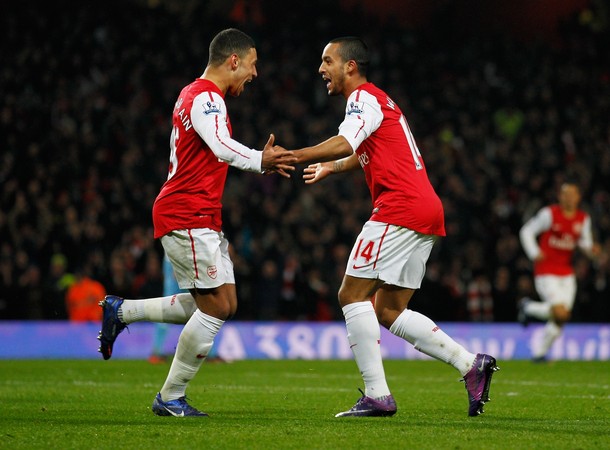 When Theo Walcott and Kieran Gibbs scored against Aston Villa a couple of weeks back it represented the first time two English players had scored for Arsenal in the same game since 1997 – a remarkable statistic, even when you take into account Arsene’s predilection for foreign talent.

Having had Alex Oxlade-Chamberlain on the scoresheet this season, Jack Wilshere proving he’s got an eye for goal last term and young Benik Afobe chomping at the bit to prove himself next year there’s a tasty core of homegrown players who could have a big future at the Emirates.

Looking at the current crop of young Lions, Alex Oxlade-Chamberlain believes a technical quality, level-headedness and playing together regularly will inspire the group to keep progressing at both domestic and international level.

“I think for their age, they’re all really mature and quite fearless,”  the former Southampton Academy product told Arsenal.com.

“I always forget how young Jack is; he’s such a confident lad. At the same time they’re all humble as well and really nice guys.

“Kieran, Theo…they’re humble guys, but when it comes to football they’re really focused and just get on with the job.

“Football is what they love doing. They’re really technically good and really talented players. I think they’ve all got the right mind-set to become world class players.

“As long as everyone keeps progressing as they are at the moment, it will be good for England’s future. We have a lot of English talent here at Arsenal and we will all be working hard to get into the national team.

“The longer you play with people, the better you get to know them. You bond and being around the same players means that you bounce off each other. It will be good for the future.”

It may have taken a decade but there’s no doubting that after much criticism from the media about ‘ignoring’ English talent, Arsene Wenger’s youth policy is starting to bear fruit with ‘local’ talent. While Walcott, Wilshere and Oxlade-Chamberlain look set to challenge for a starting berth for years to come (contract talks dependent in Theo’s case), here’s hoping Gibbs and Afobe can also stamp their authority on N5.

All of them playing for England will actually give me a reason to be excited about watching and supporting the national team!

Funny thing is, the media has always portrayed Wenger as anti-English but if you look at their ages and the players coming through, Arsene could easily have a lineup with atleast half the places taken by British players in the next few years, provided all the players stay.

Also, many of these players, if they continue to progress, could line up for the English national team and then what will the media say? Probably that Wenger has produced too many domestic players and is stifling the premier league by not have loads of foreign players

An English back four that love a good offside trap?…….

La Masia IIRC started as a proper academy around 1979 with residential facilities. . Guardiola was the first major player to come through the ranks in 1990. We gained academy status around 1998 . Jack is the 1st major star to come through as well since then. It’s already on its way to becoming better. Now Gibbs has come through along with Chesney. Also the 90 min rule being dropped will enable us to get more players from England without having to pay astronomical fees .

The 90 minute rule? I’m not familiar with that one.

It used to be that you could only sign youth players that played no more than 90 minutes travel away from the buying club. The FA are getting rid of this rule to allow top teams to get players from wherever they want. It’s supposed to allow the better players to shine. This will most likely impact on teams in the premier league from 7 and down, as well as the rest of the football leagues as the top 6 teams will be seen as a better option by younger players. Some will be smart and realise their chances are… Read more »

CHAMPING at the bit CHAMPING

bob's your uncle
Reply to  victoria-concordia-crescit

is it chomping or champing?..
i can never remember..

What about Carl Jenkinson?

Technically he’s a Finnish under-21 international…

yer but surely he will play for england? He is still allowed to isnt he? And he kind of feels British

I think Gibbs has it in him to become England’s LB, I mean A Cole has been a top player but he’s 30 now, I doubt he can last beyond the next WC and no disrespect to Baines but does he have any CL experience to prove he can do it on the largest stage. No. Afobe on the other hand needs to have a stellar season coming on from the bench to help the first 11. Whether he can do remains to be seen for me.

In general looking at http://www.arsenal.com/first-team/arsenal-s-loanees makes you think a bit about how the manager may have selection problems after the summer – especially if/when international signings are added to the mix. I guess the bottom line is that there’s money to be made from sales of the relative high quality we have available. But think about Ryo, Lansbury, Watt, Wellington (maybe), Afobe, Aneke, Campbell, and maybe even Murphy as forward options, standing more or less on the edge of the first team. Exciting! Add to that Bartley and Miquel at the back – and Eastmond and the Coq in MF.… Read more »

I don’t Watt, Wellington, Lansbury (sadly), eastmond will make it for one reason or another, but even then having 4or 5 academy lads still coming through is a great achievement.

I think the problem with Wellington is that he’s never had the chance to train properly with the Arsenal coaches. We are trying to rush him out on loan each season to build up his european points to gain a work permit but only really send him to teams with training facilities that are no where near as good as ours. That’s why players always do well at Bolton as they have premier league standard trainers, a good progressive manager and can play the game in this country. If Wellington can get a WP, then i’d give him 1 maybe… Read more »

WP?? Why does Wellington need a word processor? 🙂

I don’t really know much about Wellington other than his attitude has been questionable, according to the press, so it must be true. It would be interesting to see how he fared at Bolton for a season.

To be fair, RvP’s attitude was questionable when he first joined but Wenger has clearly changed his whole playing style (Obviously there are still flashes of it but no where near as many as with Feyenoord)

The 90 minute rule was daft because different clubs/managers/scouts value different attributes. If Messi was born in Stoke for example the local ‘football’ club would have ruled him out for not being 8ft tall and thuggish.

But it allowed clubs like Crewe, Charlton, Middlesbrough, Southampton, etc… (clubs with good youth production setups) to train players, improve their own team and league positions and then make a good healthy profit for the work they put in. Now that’s gone, they will suffer in the long run, won’t spend as much time on these players and all to apparently help the bigger clubs and national team. If a player is that good (e.g Messi), then other clubs will just have to purchase him when he turns 18 and then work on his strongest attributes. Even if Stoke didn’t… Read more »

Ugh, we should buy 3 24-28 year old, world class footballers this summer. Integrate them into the first team, and REALLY challenge for some trophies. Them maybe I’ll consider giving a rats arse about our 16 year old kids.