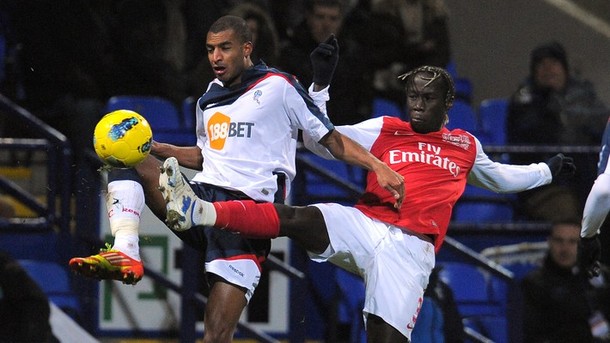 Arsene Wenger believes that Bacary Sagna is a perfect successor to defensive maestros Lee Dixon and Lauren and that his battling spirit makes him the best right-back in the Premier League.

The French international has been in fine fettle since returning from his ankle injury sustained in October. Bringing solidity at the back, and an awesome ability to win headers from Szczesny goal kicks, he has also dovetailed well with Theo Walcott in the final third to help return fluidity to the attack.

Scorer of the goal which began the comeback against Spurs, the former-Auxerre man is now the country’s most consistent full-back according to the boss; a view he feels is shared elsewhere.

“I think so, personally, and I believe that everybody at the Club would share this opinion,” Wenger told Arsenal Player. “Many people outside the Club have this opinion as well.

“I must say with the right back position I have been quite lucky because we had Lee Dixon when I arrived, then Lauren, and Sagna afterwards. They have all been real winners and extremely consistent. On that front we were very lucky.

“They are all real battlers, they are ready to die to win. All these players have been inspirational for everybody because their physical level, commitment, intelligence and desire to win is all there.”

There is reportedly some doubt about Sagna’s participation in this evening’s game against Wolves, although with Laurent Koscielny suspended and Kieran Gibbs ruled out with a slight groin strain it the boss will have to weigh up the risks of playing an away fixture with a heavily changed back four.

Best right back in world football

agree. the only two who can compete with sagna are lahm and sergio ramos.
maicon’s best years are behind him and if dani alves had to do more defensive work, he would not be that overrated.

Best athlete in the EPL!

We need Sagna to play, after this game there is no congestion and we have till monday to rest up. Lets finish this season strong COYG!

Besides, if we’re winning comfortably with about 20 minutes to go, no reason he can’t substitute Sagna for Jenkinson to give Sagna a rest (if he needs it) and let Jenkinson get a few more minutes under his belt.

“In our own stadium, against the enemy, we could not loose” what more can you say about the man.

quote of the century?

Your name is funny.

I have nothing else to add.

He may be the best in the world but he is no Eboue!

He’s been great since joining us in 07/08 with his exceptional consistency, and he was sorely missed this season with his long injury. Even his blip at San Siro can be attributed to being away from the pitch for too long then.

Sanga is a cool guy who doesn’t afraid of anything.

A club legend in the making.
One could maybe argue that Micah Richards has been the top RB in the league this year overall, given Sagna’s spent so much time out. But our guy is the definition of solid, he’s fearless, contributes a lot offensively, and is a “hard man” without being cynical.
Like Alex Song, Sagna’s another guy who never seems to quite get the credit he deserves from other clubs’ supporters. That suits me just fine though… I’m glad not to have to Citehs of this world sniffing around him!

Compare the amazingly consistent performances of Sagna with a guy like a Bosingwa, Assou-Ekotto, or Zabaleta, or even Jose Enrique (who i rated prior to joining liverpool this season) and you begin to truly appreciate what we have at Arsenal with a guy who is unselfish, never gives up, and doesn’t create a fuss in the papers or inside the locker room, just simply does his job and its easy to see he covets the opportunity he has been given by Wenger to play for a club like AFC.

The man who made arry twitch is already a legend

Sagna is so underrated it is untrue! He never gives up, solid both offensively and defensively, in the air and on the floor. He’s quick, and I thought him taking the ball to ye corner with a minute to go against City showed his experience and maturity, and overall importance to AFC. Finally, his wife is very attractive

He’s been winning headers like a boss recently. Where’s that come from??

“Sagna fit to wear Dixon crown”? That’s a joke! Sagna is ten times better than Dixon ever was. I loved Lee, but he was never a great full-back. Quite rightly, he was never a full England International.

But Sagna is world class.

He was part of our greatest back four ever, so Dixon must have been doing more than just something right.

I, however, feel that our starting back four is definitely better than that one, and they will surely show next season, their true capabilities. I mean, Boscielny alone… The dude defends like a boss!

Relapse of my chronic illness. I agree with FatG again.

“ready to die to win” <—–this is what I want to see from every player on our team. Verm Scez RvP Sagna. Every goal is an affront to their honor. AND THATS THE WAY IT SHOULD BE!

Even though AW doesn’t mention Eboue here I would have taken him those months ago we didn’t have a proper right back. Sure he was prone to losing his head but he was balanced in attack and defence, lightening quick and always a loyal servant at Arsenal.

Dear Bacary, thanks again for that goal against Sp*rs.

We went better and better since you came bac, they came bac to shit like every season.

From the moment i saw him play at the Emirates cup in the summer we signed him, i had a 100% faith in him!
Absolute collusus.
For the 1st time in Arseblog history, fat gooner is right!

He’s ace coz he has amazing heart, talent and hunger but is humble and on top of that a really nice honest person. He doesn’t need or crave the attention and he’s the type of player that all teams should be searching for. Don’t get me wrong, teams need flair players and attention seekers are good to watch (Henry, beckham etc) but players like Sagna are a tiny needle in monster of a haystack. Let’s just appreciate him for what he is, a 100 % bonified gunner.

Anybody see how many aerial duals sagna wins!? Against newcatlse itnwas something like 13 out of 14 ! He won quite a few against city I noticed aswell his a beast!! NOt to mention his probably a sound lad too

Best right back in the world? Possibly.

Best ballet-dancing right back in the world? Certainly.

If he was english, the press would go mental about him. Instead they often ignore him, or understate his ability etc. And somehow, that makes me love him even more.

The epitome of what a footballer should be. Bacary Sagna works for every penny he is paid. Class act, and for me, the best right back in the world.

Class act-and refers to twitchy’s mob as ‘the enemy’…what more could you ask for?
Gotta love our right Bac!

The way he retrieved the ball from the enemy’s net after he scored that goal was priceless.
Good character and a Gooner

That goal alone is worthy of a DVD…with different motions angles…speeds…i still see it on repeat in my head…most important goal of the year in my eyes….Wenger sign him up for another 10 years

Sagna best right back ever #FACT. dixon, cafu, alves aren’t fit to be mentioned in the same sentence as. sagna #FACT. even though he missed most of the season the man city match alone was good enough for him to be in the PFA team of the year.