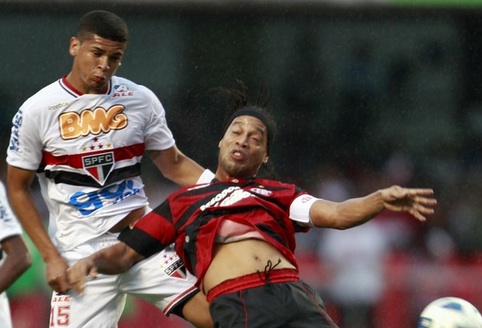 According to a report in Brazil’s Gazeta Esportiva, Sao Paulo could ask Arsenal to extend Denilson’s loan contract if they reach the final of the 2012 Copa do Brasil.

Sao Paulo face Coritiba in a two-legged semi-final scheduled for the 14th and 20th June, however, should they successfully progress their on-loan Gunner would not be eligible to play due to his contract ending at the end of the month.

The winners of the Copa do Brasil qualify for the Copa Libertadores (the South American equivalent of the Champions League) and with either Palmeiras or Gremio potentially standing in their way, Sao Paulo are keen to have all their first team squad available.

While it is believed Sao Paulo will initially ask for a two-week extension, the report suggests they’d happily keep him until the end of the year if an agreement could be reached with the Gunners hierarchy.

Cheers to @SiuFay for the heads up again.

Denilson aka mr. stats. we already have a crowded midfield so it’s better to do business now with any interested team so that le coq and frimmers can emerge.

do 7 people like Nasri, or do they think his french is incorrect?

personally I applaud him for using the feminine ‘une’, the girly twat

Surely ‘cunt’ should be feminine?

Not necessarily! French has some strange quirks of gender.

Bruv, who don’t you just but him!?

Loved his tiny face and his misleading stats.
Now replace that with frimpongs tough tackling personality and constant ball interceptions and we’ve got ourselves a midfield….son!.

Meh, loan him, buy him, feed him to the gunnersaurs; I don’t care! Get him off that damn wage packet!

Thumb up comment you mean. Come on, its a fucking excellent arsenal blog.

If there are no buyers for him, I say we keep sending him out on loans until his contract is up. It’s better than having him on our books and who knows, he might turn in a couple of good performances on loan and some club takes him off our hands.

Last time out they paid us a loan fee and paid all.his salary. lets have much of the same for another year.

NO. If they want him they can buy him or else bring him back and put him on the transfer list at a knock down price – he’s not going to play for Arsenal again so let’s at least try and offload him once and for all to take him and his wages off our hands.

When is his contract up?

With the diaby enigma still carrying on and the persistent injuries in midfield….wilshere,arteta,rosicky. Its just safe to loan him once more and later when the gods decide to fuck us again we can recall him. Heard he’s been putting in a good shift and its just safe to assume he can do the same for us.
When all work is done and our mid straightens up i’m sure a buyer or two will emerge so that finally le coq can properly rise and take his place.

On a side note:
Vermaelen ” I will stay at Arsenal forever. There will be no
transfer for me. I love London. I’ve got a house
there, I’m happy there and I don’t see any reason
to ever leave the club.”

I need a minute sob* sob*……….so very emotional for me.

Here’s a stat for you: If my shits never make a splash back, and cover my arse with piss and shit water, because they are true and straight and break clean, does that mean my shits are more healthier than the pebbles type or the slimy chunky ones? I’ll leave you to decide.

THEREISBEARCUM
Reply to  Fuck this shit

I’ll just pretend I never read that, thanks.

I gave up at second line with *sigh*

You can tell ‘study leave’ has arrived.

Do they want to borrow my pen?

Get rid of him fast.

FFS flog Denilson to them for £1 and get him off the wages bill – there is absolutely no point in extending a loan to them for a player who doesn’t fit in to the long-term plans: ship the deadwood our.

While on loan he isn’t on the wage bill.

Ship him out now! Release him. Tear the contract, or ask him to retire! or kidnap him, or shackle him to a pole or something … ohh wait. Can’t they just relegate him to the reserves?

We might as well just give him away for free if possible cos as this rate he’ll just run down his contract and leave on a free anyway!

I don’t think it’s as easy as just flogging him, if he doesn’t ask for a transfer then we have to pay up all sorts of loyalty bonuses because we chose to sell him, if these are more than any transfer fee we can expect then it would be better to let him go on loan if the club pays his salary and let his contract expires. Personally I would plump for Bendnter, vela, Squills etc having an ‘accident’ and claiming the insurance money.

Just wish we could cut our losses on one or two or four players. squillaci denilson botelho eastmond for me have no value what so ever releasing those 4 if they would accept that would bring our squad down to the 25 man limit. park chamakh bendtner fabianski mannone djourou diaby lansbury arshavin vela all need to be offered out for fees around the 3-6m mark.

He’ll link beautifully with our new German next season

So my inside source at the club tells me, anyhow

Tim
Reply to  the only sam is nelson

Had to picture holt as an arsenal striker.

the only sam is nelson
Reply to  Tim

Not the new Lee Chapman as some seem to think. No, siree.

Sam , I really don’t get your Grant Holt fascination. From what I can see he’s alright. That’s about it. Not a world beater by any stretch of the imagination. I’d rather have Shane Long if we were to go for a middle of the table striker, but I’d rather not have either and have someone world class.

The man is a thug, persistantly trying to stamp on players shins, feet when I saw the Home game against Norwich, plus so slow I could make a fair stab at beating him over 30 yards and I am 53 with a damaged spine!

lordgunner
Reply to  the only sam is nelson

one decent season for a 31 years old striker and he is the new shearer lol …no thanks,i ll bet he dont score near 10 goal next season

If he is so integral to their squad, surely they could afford to make an offer to purchase the player. If not, I say bring him back and shop him to clubs like qpr, or possibly to midtable Spanish sides.

their trying to run his contract down and wait to get him on a free, you crafty swines you!

Signed on the same day as William Gallas.
Crikey, that was a good day’s work!

Maybe we can convince spuds to buy denilson, too?

Only if we send him with some kind of disease.

Latest on M’Vila…
France:Serbia tonight friendly, 5th min serbian player attacking M’Vila from behind. Littlebit on to legs. M’Vila is down. Unable to continue after 2 min, crying on the bench. Looks seriously injured. Looking sad but looking fit for signing to Arsenal! 🙂

Cant we just sell him to these guys ?