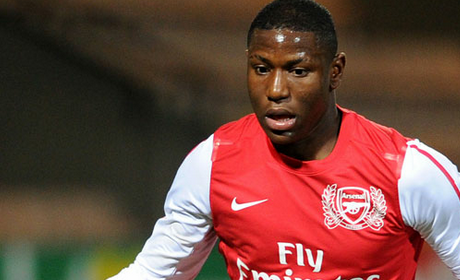 In the final part of the series I assess the young strikers currently striving to make the grade at the club.

Whereas, as we saw last week, there are a clutch of young midfielders in and around the first-team at the club, it has proven considerably more difficult over the years for strikers to break into Arsene Wenger’s plans. A case in point is that Rhys Murphy, who scored 20 goals for the under-18s as a schoolboy, was released last week having failed to earn a call-up for a competitive fixture.

If you mention young strikers at Arsenal, however, there is likely to be just one name on people’s lips in Benik Afobe. The 19 year old England youth international has received much acclaim for his goalscoring exploits for the under-16s and under-18s, although injury and loan spells have meant that he hasn’t featured as often as he would have liked for the second-string. Good at holding the ball up whilst also possessing impressive positioning, Afobe impressed whilst on loan at Huddersfield Town in 2010/11 before a brief loan spell with Reading last season. Having featured for the first-team last pre-season, Afobe will be hoping to be involved in the Asia Tour this time around and will be seeking to earn a place in the squad for the forthcoming campaign, although, with Joel Campbell poised to return from Lorient, he could find himself out on temporary transfer once more.

Zak Ansah may not have matched Afobe’s impressive goalscoring rates at youth level, but he came pretty close and has another similarity with him in that he has struggled with injury during his short career so far. Currently sidelined with a cruciate injury, Ansah missed much of the 2010/11 campaign with a shoulder problem, but, when fit, has made great strides, scoring his first goal for the Reserves against Swansea last season. Once he recovers, he will be eased back into the Reserves and will be hopeful of having an outside chance of featuring in the newly-rebranded Capital One Cup.

Nigel Neita, meanwhile, also missed much of the 2010/11 campaign through injury and hasn’t found the net since December 2010, but the 18 year old, who signed his first professional contract a year ago, made in-roads into the Reserves last season, featuring three times as a substitute, and showing increasing maturity in his decision-making.

A more familiar name is that of Sanchez Watt, who scored on his first-team debut against West Bromwich Albion in what was then the Carling Cup but has struggled to make in-roads into Wenger’s plans since then. Watt recently returned from a loan spell at League Two side Crawley Town, where he struggled to hold down a regular place in the side, and has also spent time with Southend United, Sheffield Wednesday and Leeds United. The club are open to offers for his services but, if they do not receive a suitable one, he will most likely be loaned out again until his contract expires.

Injuries have been a common theme among the young attackers and promising Brazilian Wellington Silva is no exception after he suffered an ankle problem recently, but he is still expected to report to London Colney for pre-season training next month. Having struggled for form and fitness whilst on loan at Levante, he has demonstrated his potential with Alcoyano in the second tier of Spanish football, but his lack of a work permit remains a barrier to his progress.

Philip Roberts, who joined the club from Norwich City in 2010, will sign his first professional contract shortly and has developed well during his time at the club, but needs to find a more clinical edge, whilst England youth international Chuba Akpom is highly rated and featured prominently for the under-18s last season whilst still a schoolboy. Others to watch out for include Austin Lipman, who tends to feature on the left of the attack, and Jordan Brown, who will still be a schoolboy next season but has already caught the eye with his impressive goal ratio for the under-16s as well as his performances for England’s development sides.

i look foward to seeing afobe in first team action, hopefully he’ll develop his game by training with the likes of van persie (hopefully), theo, and the more experienced members of the squad. Hopefully he dosnt become a JET, so much potential just never made the cut

Good to see talent coming through, haven’t heard too much about Wellington silva so I can’t see him being part of the first team next season, afobe on the other hand should be starting in the capital one cup for me I really want to see him in action, if robin says he’s good he must be something

Afobe, LANSbury, Campbell…….lets just give them a chance, surely atleast one of them has to better than park and the lot.
Bet you top dollar on this one.

Gotta say I can’t see Lansbury coming back, he did well at loan on Norwich but never really progressed and set the championship alight with west ham, we’ve got enough midfielders and I can’t see him getting picked over wilshere, arteta or rosicky

bc
Reply to  Simon

All the players that they must be better than never got a chance… we don’t rotate at Arsenal.

Joel Campbell is looking by far the most promising young forward. But I have high hopes for Afobe and Wellington Silva too. Wellington Silva looks as talented as Campbell, but is no where near as professional at the moment.

bc
Reply to  Jose Ozorio

I personally thi.k that afobe looked far impressive at huddersfield than campbell did at lorient. ok div1 in england is a lesser standard than ligue 1 in france tecnically but a lot more strength is required.

May be so but its still prudent to have more than enough cover for each position these days. Leg breaks, calf injuries, hamstrings, or a tevez- all this can happen anytime and thats where the lads come in, get one or two games and before you know it some young talented kid rises.
I can almost picture this chain of events in me head.

will Le Coq lift the COC for us?

That wasn’t meant to be a reply to SAgooner :O

He played a couple of games there whilst other players were out but he’s reverted to being a striker now.

Hopefully Campbell gets his work permit sorted for next season, him and afobe are better options than Park & Chamakh.

I also have high hopes for Wellington, the guy is obviously very talented.
Why dont we loan Wellington to L’orient? instead of all these spanish clubs, cos its just not happening for him in Spain!
Maybe due to the language and culture he prefers Spain, but surely for his Arsenal career he needs to leave spain,
Anyone know if he’s likely to be included in the Brazilain Olympic squad?

He is in Spain to get a Spanish passport. Its alot harder to get French citizenship/passport.

I think if we were allowed to start a new team, made up entirely of players who didn’t make the cut at Arsenal, then we’d do pretty well

Manchester City have gone on to unprecedented glory using this system.

Regarding Lansbury, people forget he did well at Norwich and at the beginning of the season he was decent at West Ham until an injury kept him out for 3 months. Then he came back to a team managed by Fat Sam who doesnt use a midfield. He also does well for the U-21s. He deserves a chance and I hope he gets it

I think we need to sell some of our wingers in a couple of years cos we have too many!
In two years we should sell Gervinho and Walcott and replace them with Miyaichi and Wellington