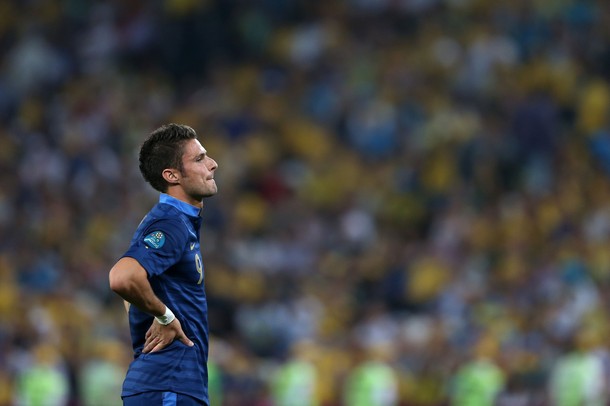 Olivier Giroud has shed more light on his move to Arsenal confirming he’s already had chats with Jack Wilshere and Tomas Rosicky, that his first professional club will scoop a windfall from his transfer to London and that he completed part of his medical while with France at Euro 2012.

The 25-year-old striker put pen-to-paper on Monday at London Colney, just 36 hours after Les Bleus were defeated by Spain in Donetsk. Revealing his desire to firm up a verbal agreement as soon as possible, Giroud told Le Progres:

“I signed on Monday. I didn’t want things to drag out and on my return from the Ukraine I left Paris for London on Sunday evening.

“On Monday I underwent medical tests. I’d already done some of the tests with the French team and brought the file with me. In the afternoon I even had an MRI scan. I also visited the facilities. It’s another world.

“It’s true, that I almost signed during the competition. We had an agreement in principle, but I wanted to get out here.

“I’m happy and proud to join this club, I also took pictures and video with different jerseys for their site. And I met Jack Wilshere and Rosicky.”

Asked if Arsene Wenger had been present when he signed, Giroud explained that it was actually the Gunners assistant chief-executive Dick Law who had taken charge.

“No, he (Wenger) stayed in Ukraine for the last matches. I signed with Dick Law, his deputy. I even found a house in the suburbs of London.”

Arsenal are believed to have paid €15 million to secure the signing of Giroud, a figure which makes him more expensive signing that fellow new recruit Lukas Podolski. It appears though that some of that money will trickle down to the striker’s former clubs with Grenoble Foot 38, for whom he played between the age of 13 to 22, also cashing in.

Currently playing in the fifth tier of French football after going bankrupt in 2011, the outfit will no doubt welcome the financial boost

“I was trained there, so it’s really good for them.”

Deputy Dick Law? Sounds like a character from a spaghetti Western.

Wenger & Law at your service.

Played by Gene Hackman. I’d be careful with expectations on Giroud. When Chamakh came, he had scored loads of goals in Ligue 1. What happened afterwards, we all know. I haven’t watched a great deal of him, I don’ know how good he is on the ball, but a target man of that size will have to get more service. Wenger has to change a little bit his style and play a little bit more direct. Sagna and Santos can cross really well, something that this guy could benefit a lot from. I hope he gets more service than Chamakh… Read more »

Actually Chamakh was never as good as Giroud is. Chamakh barely scored more than 10 goals each season in ligue 1 while he played there for about 10 years, when Giroud scored 21 (and 9 assists) after only his 2nd full season in ligue 1. Very good prospect I think.

1. Sagna doesn’t cross well.
2. Giroud is a different class to Chamakh. People only compare them because of their height and they both came from France, BUT Giroud is first of all stronger, and scores mostly with his foot.

Realistically I expect the Pod, Giroux and Theo to get 25 goals combined. I’m hoping for around 22 from our captain, 13 from our midfield (Wilshere, Arteta, Song, Ramsey) and 10 from our D-men. Add another 10 from other players (Gervinho, Ox, Rosicky…) and we get to 80. That’s a good number, but below ManUre and Al-Citeh in 2012.

We need all of our players to have terrific seasons to be able to compete.

I remember that pin point cross sagna.delivered to van persie when we played litterpool game.
Anyway, i’m sure he’s got more of those in his cabinet

People here need to wake up and smell the coffee. The fickleness of football fans is ridiculous.
Chamakh is a better player than what he’s given credit for, but Arsenal’s style doesn’t suit him at all.
Some people here assess Giroud as if they had Montpellier season tickets.

And finally, Sagna doesn’t cross well? It looks as though you have been too busy watching Montpellier to even bother watching Bacary’s improvement last season.

… and Jenks can put in a mean cross! That kid will run and run all day and looks like he’ll get stuck in on John Terry too.

The great thing about our club is that you can genuinely look at the long-term prospects and know that we won’t be bankrupt or shit. For other clubs this is far less true.

Not so. The boy can play.

No.4
Reply to  Ace McGoldrick

What the hell is a Grenoble Foot?

Trust me, you want a doctor to look at that. It can end up being quite serious.

Something you need to go see the Doctor for.

Not ‘a’ Grenoble Foot, Numbkins. No indefinite article … just Grenoble Foot and the number 38 which along with the ‘Foot’ no one bothers with.

(a) A rampant incurable fungal condition that turns feet into fondue.

(b) A football club situated in the Savoie Alps that went into bankruptcy last year and now plays who knows where … in fifth tier ‘amateur’ French football, I think. Nice place Grenoble.

Yuk, imagine being a GrenobleFoot Doctor, sounds like something Adebayor would take up after football…

Andre the Giant was from Grenoble!

Im really happy he sounds so enthusiastic. Even finding a potential house so soon its obvious hes relishing the whole idea and move. Love it, hope he’ll keep the spirit on the pitch and all should be good 🙂

“And I met Jack Wilshere and Rosicky.” I don’t know why but the thought of new and old gunners getting together is somehow comforting!

THEREISBEARCUM
Reply to  gooner from bangladesh

Jack: “Hello?”
Giroud: “Allo, it is Olivier. Tomas Rosicky gave me your number.”
Jack: “Alright mate? Actually I was gonna call you. I got a few ideas about some set piece routines we can try against…”
Giroud: “Oui oui, ecoutez – where is ze best place in Londres for ze beautiful women?”
Jack: “Eh?”
Giroud: “I like zem with… ow you say…. big jubbly bubblies.”

He met them at the training ground.

hope you didn’t let coq down

To steal a line from elsewhere: “The players don’t have to womanize anymore; now the women manize.”

THEREISBEARCUM……Theo probably pointed Giroud towards the Seven Sisters Road with a pat on the back and advised him, ¨lots of cheap whores down that way mate, and some prostitutes as well!¨

Fifth tier?, sounds so fucking unfair. Italy was even worse with match fixing but it didn’t go as far as fifth tier!.

..which makes the windfall that much impressive. A massive bailout methinks.

They can probably get Chamakh for that.

Well, as harsh as it may sound, 5th tier sounds about right. EPL, La Liga, German Bundesliga, and Serie A are all still graded higher than Ligue 1, largely due to their lack of consistent success in the Europe scene. (Even if you grade them higher than Serie A because of its corruption, 4th and 5th doesn’t really make any significant difference.)

“Fifth tier” is referring to the French division the team play in. If they get promoted next season for instance, then they will be in the fourth tier. And even in reference to Europe, that’s not right. Tiers are not just positions in a league, they’re a categorisation that groups things of a similar nature (or in this instance ability or power). Anyone can see that in terms of quality of football, amount of money thrown around and the players that get traded, the EPL, La Liga, German and Italian leagues are on the same tier when considered globally –… Read more »

Come back Adidas – everything is forgiven!

Adidas, for the most part, makes some ugly kits these days. The 3 stripe thing is a little played out.

Q; What’s the difference between a dead deer and spurs fan in the middle of the road?

A; Skid marks in front of the deer

Sorry came out of hibernation for a second to check if RVP had got his act together, back I go then…

Makes a good lawyer joke too.

I like this boy’s attitude. He says good things…..not just about winning trophies…..but about things like culture and respect. He seems to be fully aware of the opportunity he has been given and seems genuinely appreciative and excited about it. It all bodes well.

I think that €12 million for Giroud is something of a steal, Hulk (who might be better, but he’s definitely not leagues better or even proven) is said to cost around €40 million.

15 million euros, or around 12 million pounds

No, I’m fairly certain that the figure being bandied about by most reliable publications was 12.6 million pounds.

His buy-out clause was12 million euros that is about £9.6m and that’s what we paid.

Hulk is more of a wide forward than Giroud would be. And though he’s good, he’s nowhere near 40m Euros good.

Saying that, he can do this: http://youtu.be/qaPgBzXcWOc (also featuring Benfica fans proving that they’re scum).

I wouldn’t read too much into this 40m euro price tag. In fairness, if you were in Porto’s shoes and Chelski contacted you, wouldn’t you do the same?

Yes but its the bloody HULK for god sake !!!!

What happens if you make him angry….

welcome to the Arsenal. We have got class and style, thats why he signed for us instead of the chelshit.

Jordi Alba was magnifique for spain… Andre Santos plus cash for him?

Merlin's Panini
Reply to  A. Wenger

no. not Andre Santos. He’s a huggable hero!

Alba for Santos? WTF, I thought you were better than this. Santos > Entire FC Backpass + Backpass National Team.

Gossip Gooner
Reply to  A. Wenger

About that, uefalona have already snapped him up. His attacking skills- I love. pretty much the same as our santos. Santos though should lay off the pie and he’l be aiiiiiyt.

watch santos become super buff in the off season haha

from what i’ve seen santos doesn’t dive and alba does, A LOT he’ll fit right in on uefalona though

More on Giroud, Freddie Speaks and the Dark Horses in the Finals « Gooner Daily

[…] Arseblog News reports that Giroud’s first club, Grenoble Foot 38, is going to receive around €600,000 as part of the transfer deal. Giroud spent seven seasons with the lower division outfit but the […]

I just love this club!