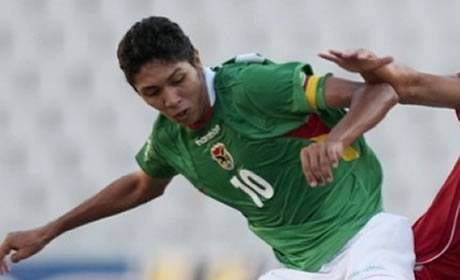 Bolivian midfielder Samuel Galindo is to undergo a trial with Spanish Liga Adelante side Lugo.

Manager Quique Setién will run the eye over the youngster before making a decision about whether or not to make an offer to take him on loan for the season.

Galindo spent last season with Gimnastic, making 12 appearances, and looks set to become another one of those youngsters who is farmed out on loan and never quite does enough to suggest a real future at the club.

He signed for Arsenal in 2010 from Real America after impressing Arsene Wenger during a three day trial, but with doubts back then about his physicality, it remains to be seen if the 20 year old has made sufficient progress to forge a career in England.

Despite having made two appearances for the Bolivian national team, that he’s on the cusp of a loan move to the Spanish 2nd division suggests not.

Mehh, I want niang!!. What happened?, did frimmers frimpong him away?, is ivan sitting on the dough? is wenger having second thoughts?

We need this man on our team A.S.A.P. We are too bloody pretty now that we have Giroud. We need to bring the ugly back to Arsenal if we are to be taken seriously in the Premier League.

It’s a shame that these youngsters no longer get to play for Arsenal these days. The pressure from the big spenders has dealth with our youth system and we’re loosing the luxury of being able to give young starters the chance to play.

Makes we wonder why we bother with some of these kids who will spend the 4 years after they sign being loaned out around Europe in the hope of getting a visa and never getting an “Arsenal education”. What is the point?

The point is: Some of them will make it.

I’m certainly hoping that Campbell will, but the odds really are stacked against the majority of these non-EU kids. It’s hard enough breaking into the first team when they’re in the reserves, let alone on a foreign loan trying to gain a visa.

or maybe the youth setup was just flawed in the past, even though the intention was good. They probably thought Wenger could turn every player into gold. The whole work permit thing should had have them buy only real talent from south america, and other continents. Those you have a chance of getting permit or at least can afford to wait for them while they progress on loan. The ones with potentials should be bought from within Europe.

Can’t help but feel he is the next guy to just disappear into the oblivion. We can hit a lot of crackers with youth players, but a lot inevitably wash away into mediocre football. Best of luck to him. Hopefully he proves me wrong. I would be okay with that

Martin Keown is my hero
Reply to  RobSchneiderDerp

A Bolivian in oblivion.