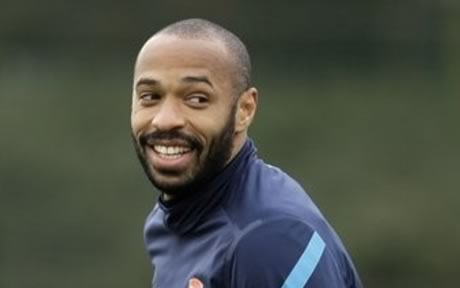 Well, not really, even if the Dubious Goals Panel are a pack of spoilsports, but the club’s record goalscorer has hinted at returning to the club in a coaching capacity.

At almost 35 years of age the likelihood of him playing for us again is remote (yeah, we know he’s better than Chamakh and Park put together to form a Dr Moreau hybrid Parmakh beast), which leaves open the tantilising prospect of Henry the coach and, who knows, manager Thierry.

Speaking ahead of New York Red Bulls clash with the insufferably despicable Chelsea, Tezza said, “I would like to go back to England with Arsenal for sure.

“I wasn’t planning to go back to play last season. It was only because Gervinho and Chamakh went to the African Nations Cup. I was there to train and they asked me if I wanted to play. Who knows what might happen in the future?

“I’ve not yet spoken to Arsene about it so I don’t know what capacity I could go back in.

“Coaching does interest me but I don’t know what my talent is going to be after I have finished my career. But I will go back to Arsenal.”

It’s true that great players don’t always make great managers, but how nice would it be if Henry was one of the exceptions to that rule.

Two seasons in a row unbeaten, that should do it.

What a guy. Love him.

That thump down must belong to Spud Cunt. (Grrr..)

There’s another African Cup of Nations this season isn’t there?

miranda
Reply to  the only sam is nelson

Is it now happening every year?

They are trying to get it on a schedule when it doesn’t happen same year as a World or European cup. Still every two years, but starting this year on odd numbered years…

Fergie the Gooner
Reply to  miranda

It used to occur only on even numbered years, but they have changed it so that it takes place on odd numbered years to prevent clashes with the Euros and the World Cup. Instead of waiting until 2015 to hold the next one though, they decided that we obviously haven’t had enough of it and needed another one next year too.

Then we’d better cross our fingers Cameroon don’t qualify; nor Ghana, I guess, if Frimpong is looking usable and not serving a lifetime ban for some tweet. Not fussed about Morocco.

I know they have a good reason for holding it in winter and I’m not trying to be arrogant and say that Africa shouldn’t have a cup competition, but still – the organisers must know that all this competition does is piss off European clubs who have to do without essential players for two months – and that’s if they don’t come back crocked having fallen into a giant African divot.

Get back here henry and this time take your jersey number back.
You true legend, you.

If I were a woman, the amount of times I’d pop out his babies are unlimited! Boom boom.

Xav
Reply to  Gooner Up

Henry could be a fucking scientist and still be one of the best… Future Arsenal manager for sure!

Curious comment, is there something awful about scientists I’m not aware of, or is autocorrect broken?

why? because they’re smarter than you?

i was there when he scored the last minute winner at sundreland brilliant !!!

You’re a fucking legend as a player and a Gooner, Thierry.

I’d like to see him play for us again, what was it? 3 goals in ninety minutes! yeah well past it. *sarcasm off*

RVP you are a cunt sir, enjoy forever being in this mans shadow, prick.

Stuff of legend! I can see him being a coach or sporting director for Arsenal.

What’s amazing is that he’s played about as many minutes for Arsenal in the last 2 years as Diaby has!

Could teach RVP about a lil thing called loyalty!

I must have woken up in that alternate reality where Henry didn’t go and play for Barca for a few years, then.

Yeah he went and played for Barca after scoring a shit load of goals, WINNING TROPHIES, and leaving on good terms. Everything he did with us was pure class on and off the pitch.

We will not be able to say the same about Na$ri and Van P€r$i€.

Oh I see now. So Arsenal actually are a one-man team and it’s entirely Van Persie’s fault that he suffered so many injuries during his time with the club and consequently wasn’t able to score as many goals as Henry. I get it. Maybe you think we should start punishing players with fines for getting injured and not recovering in a timely manner? And while we at it, every season we don’t win a trophy, the striker should have his wages docked since it’s all his fault and the rest of the team has nothing to do with it. You’re… Read more »

I believe you were told to pipe down!

I think that “loyalty boat” sailed along time ago, only that rvps’ was full of cuntishness it sunk!.

Thierry, you will always be welcome.

Joining us only for a few weeks last season provided some great moments like the goal against Leeds and gave both the club and the fans a massive lift at a time when we really needed it. We would love to have you back on a permanent basis.

Just last week (I think) let’s not rule out some sort of a playing capacity just yet.

cant help feeling he wouldnt get in the side, as by January the rest will have hoisted the white flags, and conceded the title to us, having been beaten into submission by the new look super-Gooners…………….

All the more reason to let him play, squad rotation will be needed so that we can go on to win the CL as well.

And with no one in the stadium to see it because that game was at 1pm on a Wednesday.

Cant just forget your thriller against Liverpool back in 2004, that’s what i call CLASS!!! you are always welcome ‘Mr. Arsenal”

I thought Tony Adams was “Mr. Arsenal”? Perhaps Henry should be “Monsieur Arsenal”?

And giroud, Mr. sexy!!. Nothing more, nothing less!.

The door is always open for you, Mr. Henry.

According to a recent poll, this post has been voted your Number 1 Post in the last two you have made with a massive, landslide majority of 2 thumbs up.

Henry should be Arsenal’s CEO. He is better than gazids and Kroenke because he is loyal to Arsenal and Arsenal is his home forever. At least better than those people who use “they need to repay debts”as an excuse and have said that they had no money for many times but took so much money after we had been beaten by mu at old trafford.

… and we’ll welcome you back in any capacity you want to return in, Mr. Henry. It took me awhile to forgive you for leaving for Barcelona, but after the shameful way they treated you, and your return to The Arsenal ‘fold’… well, all is as it should be.
Also, he’s an absolutely gracious man for spending time to autograph my replica kit after I made an ass of myself shouting at him in badly accented French from the touchline.

Great Moreau reference, by the way. I’d be up for seeing a Vermielny beast, personally.

Pat Rice didn’t retire. He’s down in the basement, gene-splicing.

This is a True Legend, not an RVP one.
I would not mind to name my son after him.

Would love to see him get a goal vs Chelsea tonight

Love to have him back legend, he’s statue might have to be redone yet again

Rvp s’ statue will be something to behold, erected right beside henrys…..a true legend of the red and FUCK RIGHT OFF!!!!.

[…] other news, Thierry Henry has stated that he would love to come back to the club on a different level, probably as a coach. Of course, they say great players never become great managers, but would be […]

[…] other news, Thierry Henry has stated that he would love to come back to the club on a different level, probably as a coach. Of course, they say great players never become great managers, but would be […]

Without TH12 we finish below the cunts last year. He is a man amongst men.