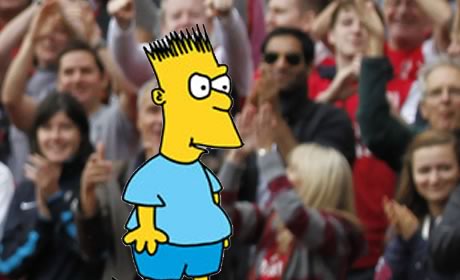 According to TF1, Laurent Koscielny is on the verge of signing a 3-year extension to his current deal at Arsenal.

L’Equipe claimed last week that the French international was set to be rewarded by Arsene Wenger after his considerable improvement since signing two years ago from Lorient.

It is believed that Koscielny’s agent was in London today to oversee the penning of the new deal with an announcement expected in the coming days.

Interestingly (or perhaps that should read ‘worryingly’) the article also hints that both Barcelona and Inter Milan have been keeping an eye on the 26-year-old with his current contract at the Emirates ending in 2014.

News of Koscielny’s decision to commit to Arsenal comes as a welcome boost at a time when most of the headlines are being made by supposed ‘wantaway’ players stalling on talks with the Gunners hierarchy.

Cheers to @SiuFay for the heads up.

But not in a pale blue shirt! For some reason, this picture reminds me more of RVP than Kos!

Back to topic: great news! And that is all.

And then squillaci for france?

Kos for captain.Oops perhaps not

The sad thing is that Kos signing a new contact will not get a fraction of the media lime light as the transfer saga that is unfolding before our eyes. I must admit that the first few months Koscielny had at Arsenal didn’t convince me but he has grown into such a consistant defender and one of the more cherished Arsenal players in the squad. IF true about the rumours of Barca and Inter that would just show how much of an international reputation he has started to receive.

Bought mine two weeks ago! Couldn’t decide between Koscielny and arteta, but laurent won out after a coin toss!

Are you sure Koscienly didn’t boss into buying his shirt.?

Do people actually do this?

I put obscene phrases on mine.

Had some friends once who got shirts reading “Breakfast of Champions” with the number 69.

Good idea! With RVP good as gone and Arseenal not likely to get Dempsey, Kos is an excellent choice of a shirt.

Some welcome news in another summer marred by disloyal players. I am still hoping RVP stays cos as it stands we have a team capable of challenging for trophies provided we stay injury free.

At least we can see him regret his decision when he leaves and plays worse, and we win trophies.

Kos in red and white not blue.

sorry, just checked, he is. I thought he was much younger, but his age might explain his composure.

Kos is first name on the team sheet for me.

I always put my name on first but Arsène always scratches it!

Happy for him (& Arsenal of course). Hope Sagna is next as well

That picture just made me lol all over my keyboard

Let’s hope we can sign Alex Song this summer as well. But my gut tells me that we may go through the same (theo) contract bullshit next summer with Song. He is represented by Darren ‘Filthy Cunt’ Dean.

I will be highly surprised if Song sings an extension, he believes he is way better than he is, he will be gone next year.

Koscielny can head the ball, so I wouldn’t think barca would be in for him.

no DNA no deal.

Give the kossfather what he’s rightfully earned or die!!!.

Brilliant news.
I have to say I believed in him from the start, I remember him playing really well in a game against Milan in the Emirates cup (I think Chamakh scored in that game as well, but we know how that turned out) and was immediately convinced.
Surprised at how little praise he gets outside of the Arsenal fanbase but hopefully he will have another outstanding campaign in a cup winning team and prove a few doubters wrong. Not sure why there are still any (maybe because he looks quite slight?) but still.

koscielney has got to be one of the finds of the 21st century. wonder would citeh or any other club for tht matter have forseen the player he has developed into, the answer? no of course! imo, as long as they stay fit, kos/verm is one formidable pairing! and reading into barca’s interest in him, well, they can just fuck right off

p.s, just wanted to say the daily mail are a shower of [email protected]$%*£^$. that is all

feygooner
Reply to  kiss my arsenal

Okay, let’s not get carried away.

ramgooner
Reply to  kiss my arsenal

if him and sagna sign we will have a settled defence.

bouldy(arsenal DNA and defence coach).
wow this certainly looks like a championship defence.they only need that one defensive midfielder in front of them to give protection.

What a crock – we’ll never keep him. He has Tours DNA.

I read today, in the world of made up stories, that Barcelona have been watching the progression of these talks with interest. For once I hope this is true…and when they read the last article of him signing his long term deal that they don’t miss the fine print.

Nice one Laurent. With you there’s no KOS for alarm next season. RvP and Theo to follow. Gunner4Life

he is by-far the best in the arsenal team.he will never sign for any club like his man shitty predecessor.

Wait, you mean we aren’t waiting till he’s got a year left on his contract to add an extension? Surely this must be a typo, lol.

Glad someone has some loyalty to Arsenal. Definitely deserves a new contract after his very good season. Barcelona and Inter can fuck off now!

the man who put messi in his back pocket

Badaab
Reply to  the only sam is nelson

Performance of his Arsenal career for me… keeping that Barca midget off the scoresheet and not letting him flop around to con the official.
Also… this:
http://www.youtube.com/watch?v=–Q4SMWLiqE

This ia the real player that we should keep gunners at any Kos. Please Boss.

I remember Ian Wright saying in his Sun column back in January this “while I like the central defensive partnership of Thomas Vermaelen and Laurent Koscielny, who is turning into a Nemanja Vidic-type player at the back.”. I normally rate his opinions on Arsenal just slightly above Smudger and way above Paul “guffaww” Merson, but Kos really has been a find and a half for us, I love everything about him, he has a heart that Gallas/Nasri wouldn’t recognise if it slapped them in the chin!! I realise some here may thumb down cos of insult to Wright/Smudger/Merson, but I… Read more »

Good news if it’s true, without a doubt the most improved defender of last year in the league let alone the squad. He’s really come into his own. I think playing with our bfg has had a positive influence on his game.
Hopefully the same can happen now with wilshere playing with arteta

Any news on a cdm signing? Mvila Capoue biglia or otherwise?

Though I like the signing of Poldi and the OG, I think this is our best signing of the season so far. This guy is amazing!

Why and I the only one with my mug being shown on here? I mean damn I am beautiful but I look distinctly un-Hulk. Even in Black and White you can see I am not Green!

i think his contract already goes to 2014 so this ext will take to 2017, at the end of the day no club or player wants to be tied to either for more than 5 years, not healthy for either to get too comfy. Szcz, Kos, Coq, Wilshere and the Ox could be our core for few years yet so if they all get tied till 2016-17 then i’ll be more than happy with that

Ah, I didn’t know that, thanks.
I just love the guy, my favourite player in the squad now.

So we can sell him off for megabucks just before he turns 30, duh.