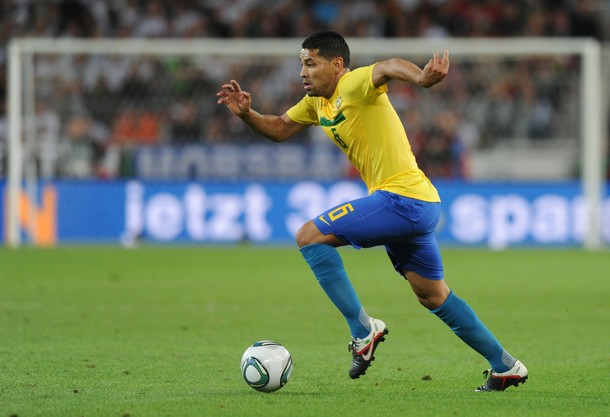 Andre Santos has revealed that his performance for Brazil against Scotland in a friendly at the Emirates was the catalyst for his move to Arsenal.

Impressing for the Selecao in the match in March 2011, the left-back confirmed that he received a phone call from Arsene Wenger as the boss scoured the globe for last-gasp recruits in the final days of last summer’s transfer window.

Speaking in an extensive (and well worth reading interview) with The Elastico, Santos revealed the conversation which persuaded him to quit Turkey for the Premier League:

“Arsenal first contacted my agent, Carlos Leite, who has been my agent for more then three years.

“He spoke about interest from Arsene Wenger, because during the friendly match with Scotland at the Emirates I had played very well.

“Wenger watched me and at the moment that I heard about the interest, I wanted to do the move.

“The discussions and negotiations began. Arsenal were at a difficult time and it would be a good opportunity for me. Carlos Leite advised me and said that Arsene Wenger wished to get in touch to talk to me.

“It was very pleasing that a great manager with his qualities wanted to bring me to his club. Arsenal is a big club with a rich history.

“When he called, I saw an English prefix on the phone. He spoke English, I only knew a few words and my English was flawed, but the conversation still went smoothly. He understood what I said and stressed that playing for Arsenal would be an enrichment.

“I wanted to help and the next day I was already on the plane for the contract negotiations and medical tests.”

Admitting that he came to England to win titles and to regain his position in the national team, Santos admitted that he still has work to do on improving the defensive side of his game.

“In Brazil, we have laterais, and they attack a lot. In Brazil, you always attack. In Europe it’s the opposite: you can not attack.

“It is therefore difficult for a Brazilian player [in my position], when he travels to Europe to adapt himself to this mentality. He can not attack, but has to defend. But thanks to my time at Fenerbahce, I learned enough in terms of defensive work and positional play.

“The Premier League is obviously one of the best leagues in the world. The defence is an important part of it and I have learned a lot this season. It is certainly true that I am technically skilful and rather quick.

“Today I learn how to mark and support the attack when going forward, but next season I hope to make progress for Arsenal so I can become a regular starter.”

To read the whole interview in which Santos talks about his formative steps in the game, his move to Europe, his aims at Arsenal, his take on Van Persie’s future and his desire to play at the World Cup in Brazil in 2014, click here.

Hmm… I believe that match was where the Brazilian legend Ronaldo was the guest of honor as he had just retired a few months back. .

Next time I see this top fella confront ballotelli I’l seriously top myself. No one ever dared but cool motherfucker santos ofcourse.

Killing yourself seems a pretty drastic form of appreciation to me man.

Santos: “Alo?”
Wenger: “It is Arsene Wenger. Would you like to play for Arsenal?”
Santos: “Sim.”
Wenger: “Bon. See you Monday. Bring a packed lunch.”

What a wonderful arsenal man and even better for a laugh as we’ve come to realise.
I thankyou Wenger for courting santos, must be fun for him though, seeing that little fatty running around with the ball.
Excellente!

I fell for him in the Chelsea away game. Game of two halves. Love his nonchalant one touch link up play and left foot strikes

I will always love him, but it still hurts that he blocked me on Twitter because I proclaimed ‘Well done gay!’ to him after he scored against West Brom.

THEREISBEARCUM
Reply to  Taking The Mik

It was probably a mistake. He loves being reminded of that.

Vick
Reply to  Taking The Mik

Awesome…….less competition to his heart.

Jokes aside, he’s one of rvps’ best friend at the club and he’s been there like what? 11 months?. Really says it all about him- he’s one huggable, likable gunner.

I love this guy. No homo.

No it must be guy. That gay joke should take some rest.

Andre, one of my favourites from last season. A little bit of a liability at times but the way he plays the game is just a joy to watch. Carefree.

have you forgotten he gave Balotelli shits?

hey santos is a very good player i lykd d competition in dat left back position he and gibbs nobody owns d wing they are stil workin, santos sit up nxt season if u wnt to be in d brasil national team i luv guy not gay

Why is my name required
Reply to  skilful nnanna orjiogbu

Joy to watch, Deft footwork; I bliv with some work on d defensive side of his game, can be one of d best fullbacks in d league. A 6 goals-a-season leftback is definitly an asset not a liability

What’s the d league? Something in Italy? We play in the Premier League mate.

I hate people using d for ‘the’ more than any other stupid lazy phone-driven contraction. It’s corrupting my language. I hate it.

Do the French, German, Chinese, Italian, and Spanish-speaking parts of the world have this problem, or is peculiar to the English?

Nice character. Friendly, get along well with mates, especially RvP. But also showed he’s not to be bullied by opponents. Like him. Skilfull, typical of Brazilian. He’s working to improve his defensive aspects of his game, so that’s good. He can even fit into the midfield with his good ball skills, passing and shooting.

Hopefully Steve Bould can help him improve his defensive aspects.

Jesus H Christ, between all of the played out “gay” jokes, and all the illiterate text speakers on this thread, I now need a Vicodin and a half pint of rum to wash away the headache just so I can get back to work.

poor gay, everything is finna be okay

I dont undrstand who has given these useless chunks a rt to cal dmselvs a gunner. Dy r a nuisance dy r jst pervert dt jst make fun dt guy said wid lunch thing he is a jerk. Santos an arsenal player did well nd u ass holes if u dare put ur ass where ur mouth is nd santos in cumng season wil blow it wid his perfomances. . . .

You, sir, may be retarded. Please see the rule regarding tex speak.

Don’t think he can actually READ the rule book. Maybe too advanced for the guy

I prefer Lick wid lunch myself.

Yeah can see that but italy have been the entertainers of this competition not spain. Was rooting italy for the first time and…
One thing for certain balotelli can keep his cool may be its because he knows there are a 100 clubs out there for him but he can play for just one country.

Ooh, you slut. All of them? The whole team? The ‘first’ time?

Probably the most predictable of all tournament outcomes.

Was also cheering for Italy, and also, am I the only one who barfs when he sees Busquets?

Really think Santos is an excellent player and not as bad a defender as some make. We look a much better team when he’s playing, and I’d pick him over Gibbs.

We love the lovely Santos!

I really do love this gay. Seriously, with him and Gibbs I think we have a better left back duo than anyone else in the league (or just about). It’s good that he recognises his defensive shortcomings so hopefully he will improve there, but I think he’s a good all round player and gives us something different. If we ever move to playing a 4-4-2 (we can dream), I woulnd’t mind seeing him playing on the wing in front of Gibbs. Of course we have other options, but it could be cool. If both he and Gibbs have injury free… Read more »

Actually think Podolski is going to be great in front of Santos on the left. His discipline and unselfishness will pair perfectly with the cuddly maverick overlapping all the time.

[…] the small bit of Arsenal news around this morning, Andre Santos talks about how he came to join the club, and his ambition to make the left back position his next […]

I think Santos is a top guy I hope he does pick up his defensive side as I just love the way he plays going forward. Is it me but does this team feel a little more together with less Ego’s ?

He is obviously stronger than Gibbs but I don’t think he is a better player or defender definatly a great buy but I think Gibbs is the future.(if he can stay in one piece)come on you gooners!!!!

People doubt his defensive ability but he’s still the best left back we have. A real quality guy and we look a lot weaker without him in the team.