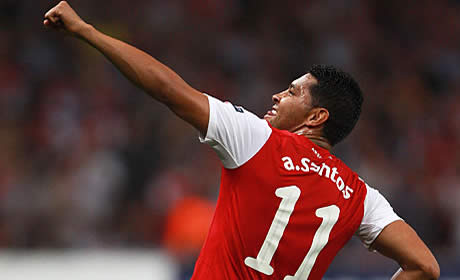 Arsenal have named their squad for the Markus Liebherr Memorial Cup this weekend, and a surprising number of first team squad members will take part.

The Gunners are playing in a round-robin tournament with the hosts and Belgian side Anderlecht and will play each side for 45 minutes.

Talent spotters will have eagle eyes on Tomas Eisfeld, the young German who signed earlier this year, to see how close to first team action he might be this coming season.

The games kick off at 6.45 v Anderlecht and 8pm v Southampton.

No, we don’t know where you can get a stream.

Hmm I wish they’d say if Niang (the guy on trial) was included in the squad. Would love to get a look at how he plays.

I was just racking my brain as to who Niang was and wondering why he was on trial thinking you meant a court of law. Silly boy Corp!

N.B.: Walcott and Song did not graduate from Arsenal’s academy. Walcott was a product of Southampton’s youth setup, and Song a product of Bastia’s.

Err, forgive me for including Djorou in that list as you’re right about him at least.

and they all are still @ Arsenal!!! but d ones we buy are the ones leaving every summer, i just hope Theo Doesn’t spoil the chain

The Coq is sure to leave his!

Walcott, Ox, Jack Wilshere, Gibbs, Bartley, Lansbury. All gonna be in the England team at some point.
Then I’ll really cheer for England.

Do you know where I can get a stream?

COYG
Reply to  I skim articles

Damnit I was going to say that.

Well, according the Arsenal app we won tomorrow’s game with Southampton 1-0 and beat Anderlecht by the same score.

If the Arsenal app can predict future scores, there are going to be some unhappy bookies.

gooner from bangladesh
Reply to  Gunnerstothemarrow

I hate Terry as much as the next guy, but that was just terrible man :\

Gunnerstothemarrow
Reply to  gooner from bangladesh

Get a life mate afterall it was only a dream!

That`s actually a good idea for him, since it`d prove he`s not fundamentally racist… Hit two bird with a stone kind of thing 🙂

I just wanted to say: thank you, thank you so much for that link.
I had no idea this site existed! I never thought we had a British Onion, and it is brilliant. I will read it everyday from now on. Just thought I’d let you know that.

Try changing your eating habits in the evening. Nobody deserves to dream about John Terry

Taking a closer look to biglia is one of main purposes we are in this friendly tournmemt. Wenger has always signed players from teams that we play friendly matchs against like Eduardo, Podlski, an ld vermalein. I bet it’s not a concidiunce.

I don’t know much about the player beside his desire Jo join mardud and are intrest in him, but the positive I am taking from this I’d that the boss is eager for more additions hopefully.

johan.chamak.ramsy.squlaci.vanpersie could have been offloaded

Someone clearly offloaded your brain.

He was training and doing weights early on in the week, so he might put in an appearance. Maybe he’s still on light duty for now though.

the only sam is nelson
Reply to  THEREISBEARCUM

that’s what my club source tells me

Had a dream last night where he was played in this tournament for just one of the games (can’t remember which opponent) as the advanced striker in a 442. He scored about 4 or 5 goals, all ruled out for stupid reasons by the officials, all solo with some crazy skills… some of which I have never seen before! So yeah, it’s got to be a prophecy of some sort… or that off cheese I was eating during the evening… 😉

We need a rb

Xavier
Reply to  We need a rb

He was out for three months after his leg break against Sp*rs. I expect pretty much the same length of time out now as well. Meaning August/September return.

Jaroslav Frechik
Reply to  We need a rb

In Sens with Ludivine.

Diaby probably pulled a muscle with those weights. Out for rest of season?

First silverware for the year?

You can see the Southampton and Anderlecht matches on ArsenalPlayer i think, atleast its scheduled

Sorry … but not on Arsenal Player. Highlights later in the week.

Not sure if this is relevant, but do you think that Arsenal will do business with Anderlecht since they are visiting England? There where some heavy rumours about Matiaz Suarez in February.

Just a thought, though.

There were a lot of rumours around Lucas Biglia a few months ago. We are definitely looking to strengthen that area of the pitch. It seems the M’Vila deal has gone cold.

yeah, I heard something about personality issues with M’Vila? I don’t know what to believe anyway, we are linked with everyone and their great uncle. I am fine if we reject a player based on personality issues, look at guys like Nasri and Bendtner. Yes they contributed some, but ultimately were not worthy to wear the badge

The M’Vila deal is still on mate.

You mean, The Coq rises.

If this counts as silverware, then the Emirates Cup counts and there was no barren spell because Arsenal have won that thing 3 times (2007, ’09, ’10).

Who is this Marcus Lieberr anyway? And why was there a penalty shoot out, which we lost but still won the cup?

He was a legendary businessman.

Just an assumption as I don’t know how they worked the points out but I’m figuring hey did it in a NHL style way. So I would imagine it was 3 points for a win, 2 points for a penalty shoot out win after a draw, 1 point for the losing team of that penalty shoot out by virtue of the fact they drew.
That being the case the table would look like this –

Like I said , just a guess, but it would certainly make sense.

The Liebherr family own the company that make most of the big mobile cranes & a lot of tower cranes working in britain,amongst other construction plant & machinery.Dont know much about Markus though,sorry!

Djorou was impressive, good to see my faith in him seems to be paying out. haha gibbs should be made captain a lil more often, santos- the brazilian darling dazzling as usual. Gervinho was superb on the flanks (good to have him back).

Finally, i think i have absolutely seen the last of chamakh- struggles against abl shit opposition!!!. Sell him asap to whomever. Lansbury too neefs to improve.

Didn’t see it, but got the impression from the twitter feed that Santos has decided from now on his position is striker. So suck on that, Van Persie, a team with Fat and Cuddly up front won’t be feeling the need for you.

Looks like someone decided to go on an emergency holiday!!!!!!

Its been more than 2 days, and they are taking their weekend s very seriously..please do a post on something, anything.

fuck…need some new story. where the fuck is bendtner!!!

“Some people think footballers only think about money but this is not true.
City may pay big bucks, but the attraction is the silverware.” – Ian Wright.

How this little fucker writes for The sun is beyond me. Fucking never backs the club, a legend should atleast try to back the club for once in his life. With ian you get nothing!!!. what a pleb!!!.

Either the world has stopped or everyone concerned with arsenal has fallen into a big black hole that sucked them right out of existence.

No arseblog news for 3 days? WENGER OUT!!