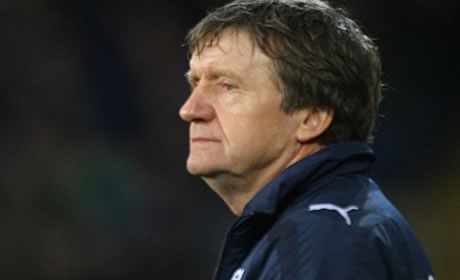 Arsenal have confirmed that Terry Burton has joined the club as ‘reserves and head development coach.’

With Steve Bould’s promotion to Arsene Wenger’s number 2 and Neil Banfield being appointed first team coach, the club have given the job to Burton, a former Arsenal youth team player and a man with a wealth of coaching experience.

Speaking to the official site, he said,”I’m delighted and proud to be joining Arsenal as reserves and head development coach. Having started my career at Arsenal as a youth player, and then as a coach, I know the history, class and values of this great football club. I can’t wait to get started in my new role and to meet the players and my new colleagues.”

While Arsene Wenger welcomed him, saying, “We are delighted that Terry Burton is joining Arsenal. I have known Terry for many years and he is someone who is hugely respected and highly regarded in the game.

“Terry brings with him a wealth of coaching experience and he will be a great asset for us, working with our reserves and youth development players.”

Although the club had looked at internal solutions for the vacancy, it was decided that Burton’s experience would not only aid the development of the players but also the coaches. He’ll work closely with Liam Brady and David Court and as well as reserve team fixtures, he’ll be in charge of the team which takes part in the NextGen series, the elite European Under-19s competition where Arsenal will play Marseille, Athletic Bilbao and Olympiacos.

So he’ll be working closely with RVP this season 😉 heh

Terry Burton is not joining Manchester City, last I heard.

What is this rvp? people speak of?

That doesn’t rhyme much but its still so fuckin true.

Haikus do not rhyme.
Thoughts expressed in syllables,
Five, seven, then five.

not bad thereisbearcum, not bad…

Exciting times ahead for the youth squads. The Next Gen elite will really open up and diversify the squad and this appointment really shows how serious the club are taking this youth competition.

Best of luck to Mr. Burton, a true professional as a coach.

Well u seem excited anyway paddy. i would have been much more excited if it was hould taking this position with bergkamp and adams taking the roles given to bould and banfield. i am certain moves like that would have made rvp think twice and other great players want to join. i mean banfield and burton sounds like a 2nd rate department store. bergkamp and adams now that sends shivers down the spines.

Yeah, except Bergkamp already has a job, being famous doesn’t automatically make you a good coach and I seriously doubt Van Persie gives a toss who runs the kids team. Otherwise: GREAT POST.

So Adams, who has so far been a managerial failure and Bergkamp, who had one season with Ajax’s under 12’s and is now the assistant manager due to his friendship with De Boer. Doesn’t exactly scream ‘will be amazing teaching the reserves’ does it?

@Gunsen Haiku not supposed to rhyme. Structure of 5, 7, 5 syllables forming a observation followed by revelation/clarity.

Good. Now sign some attacking midfielder who can score a goal. Or revert to 4-4-2 please. I know that sounds stupid but at least i am not sure if it agrees with the vision of the manager, nor does it set me up to be mates with na$ri. As for my teammates? Well drinkmates at that, fuck them, we’ll call each other cunts again tonight as we discuss pur$€’s future. And what the fuck is going on with the song and theo talks? I know it’s kinda early too to worry but worst case we could lose that dutch bloke… Read more »

Jheez if we lose Theo & Song as well as RVP, then i might have to take an hiatus from watching football next season.

The fact that its an actual possibility is frightening!

If it happens i think even the most anti-Usmanov fans would have to re-think their stance. I know i will.

Please note that to be anti-Usmanov, does not mean to be pro-Kroenke.

I’d hate to see Arsenal become a new Man City, but that does not mean I’m pleased with how our club is run under Kroenke’s ownership 🙂

Did anyone know that Fabianski and Szczesny share the same birthday???
NO? me neither but i found it more interesting that this article lol

cue the thumbs down 🙁

Poor Fabianski. Has to compete with Szczesny for Arsenal’s and Poland’s No.1 GK spot. Now even his birthday. Guy can’t catch a break.

I did know that! Who wants to touch me?

I do find our decision to appoint someone who already have experience in working and emerging Tony Adams, Keown, etc as a more exciting news than what you’ve suggest.

If it has come to that stage where we sign coaches just to impress robin v.pussy…then i guess we’ve got a REAL problem…plus we have a player that wanna follow rvp (i’m looking at u theophillus), better start packing with him cos we got a lot to do