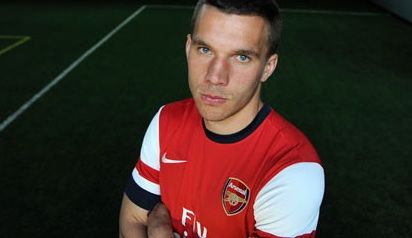 Arsene Wenger has hinted that Lukas Podolski and Olivier Giroud will feature against a Malaysia XI when Arsenal stop off in Kuala Lumpur on the first leg of the pre-season tour of Asia.

Speaking to regional press ahead of the match at the National Stadium Bukit Jalil on Tuesday, the boss confirmed that both his new signings would be on the plane to the Far East this weekend.

“The Malaysian fans are a pretty lucky bunch, I can say that much.

“Not only will they be able to catch all their favourite players in action, they will also be the first in the world to watch our new signings Podolski and Giroud take to the pitch in the Arsenal jersey.”

While Podolski may get playing time in Malaysia, it looks as though the German, along with compatriot Per Mertesacker, Bacary Sagna and Tomas Rosicky, will miss the friendly match in Hong Kong with Kitchee FC, after the club confirmed the quartet would leave the Asia tour to visit Nigeria.

be interesting to see where they play i assume we will stick with 4-3-3 so poldi and walcott on wings and giroud through the middle. I would like to see 4-4-1-1 and poldi playing in behind giroud or actually play arshavin there we hes very good!!

I’m very much looking forward to those two leading our attack. Seeing a rejuvenated gervinho also will be at the top of my list..

Shit!, we should win each and every one of those pre-season games. Knock a few past citeh, brush aside Malaysia xi and so on…..i can almost picture this in me head.

I want to see Giroud!. And what’s his shoes size? because mine will soon be vacant.

Sorry to ask rvp, but what’s with all the gray hair. Getting the stick at home?, bet you ain’t getting any. You fucker!!.

I think he’s actually Reed Richards of the Fantastic Four.

If we play our cards right we can stretch him far enough to span the distance between Old Trafford and Middle Eastlands, sell him to both Shiteh and the Glazerhawks at the same time, pocket two lots of 20m, run for it and let them sort the mess out.

Rvp should just be hung, drawn and
quartered, though perhaps not necessarily in that order.

Am I right in saying these games are on arsenal player ?

my bad. i thought they were playing at the National Stadium Bukit Jail. hahaha

I would’ve been a bit worried if they weren’t playing. Pretty obvious really, but at least it’s sort of news. Sort of.

haha “this year’s signings for the bench are….”

i think that eisfeld has already bagged the Park bench, as it were

Plus Chelski keep having bids for Willan turned down by Shaktar

Why don’t y’all just jog off to chelsea then.

Erm…. i do because for one they’re our rivals which ultimately means they’re in our way of reaching the top of the table and subsequently “trophies”. Chelsea are getting stronger and if Van Persie leaves Arsenal appear to be weaker. Do i really need to explain this?

the only sam is nelson
Reply to  Gunnermaniac

Cech is shot Lampard is past it, Essien a shadow of his rampaging former self Drogba is gone – more important than anything else, let’s face it Torres – jury still out. Chelsea are not Spain, don’t forget. Hazard – has a lot to prove, so far looks like a self centred tit for saying “I saw them win the Champion’s league and thought to myself ‘Chelsea – why not?'”. Has to do a lot to show he’s not all mouth and no trousers Mata – will either deliver in his second season a la dreamy Bob Pires, or sink… Read more »

TeeCee
Reply to  the only sam is nelson

Because we proved conclusively that a team chock full of technically talented midgets is easily the best way to win against the average Premiership team.

I’m going to wait till I see whether Hazard and Marin are going to be getting the Ronaldo or the Reyes treatment from the refs, if the former then Chelsea will be more dangerous even without Drogba, if the latter then Di Matteo will be gone by Christmas.

Anybody remember the Galacticos , and all that they didn’t win … In the beginning that is. Building a team is about more than buying a bunch of exciting players (although i wouldn’t mind one or 2 of their new recruits I).We have the second best manager in the premier league if we can have a decent enough squad blueC*nts should end up behind us again.

I wnt to see dem playing

You went to see Dempsey playing?

Our spending is done for the season. It’s only players out from now till window closes.
We need one or preferably two quality midfield players to compete. It’s not going To happen so I think it’s going to be a very tough year for us.
Shame as we are again probably not that away but have found myself saying it so many times the last few years.

the only sam is nelson
Reply to  Voldermort

now come on, it’s only a few years since our groundhog day consisted of bewidlering faith being placed in 16 year olds

new season new hope, we’ve the same number of points as the rest of ’em and the same chance of getting the luck of the draw and winning the pot that matters. and i for one am looking forward to it, mightily. as you are if the truth be known heh

I’m afraid so, but still hoping for the miracle!

I know this will go down as unnecessary hyperbole but with Wilshere coming back and (I reckon) Lansbury coming into the squad we’re okay for midfield, I’d LIKE more experienced cover for Song but if the best on offer is an expensive guy with attitude problems then I’ll hope for our bigger Coq and Frimpong to tie the midfield down instead. It’s really nowhere near as bad as usual, plenty of good, experienced signings over the last 2 years have left us *genuinely* 1 or 2 signings away from title contenders, rather than the usual indeterminate ‘2/3 world class players’… Read more »

agree, i think we’re an experienced back up keeper and perhaps one more striker (grant holt! grant holt!) away from that nice safe feeling

but perhaps that is always going to be the case – reading the other blogs it’s a common moan that other fans have, even citeh and chelscum (I mean citeh for fucks sakes, they’ve just won the league and have a forward line up that scored a billion goals last season so they *really need* RvP, right? jesus wept i despair)

“…perhaps one more striker…”
Ah, it’s people like you who get the press all excited and writing those “Carroll to Arsenal” rumours that were circulating this week.

I think there’s a competition going on to see who can print the most unlikely transfer rumour and get some pillock to believe it.

Yep, there’s always going to be a bunch of people complaining about the sky falling, unfortunately having grown up with the Internet I can’t quite tell if I just notice it more now that I’m older or it actually is the fault of modern media to turn everyone into idiots, I suspect it’s always been this way though.

TeeCee, not sure what you’re on about.

Heskey and Holt starting for the Arsenal next season is a dead cert according to my club source, who insists that Podolski and Giroud will need bedding into the premiership and can hope at best to be impact subs in the Carling Cup (or whatever the fuck it’s called this season).

Well why on earth wouldn’t Arsene play our 2 new (and seemingly only!) signings? Unless they’re carrying and injury and with no end to the RVP drama in sight wouldn’t it be prudent to get them on the pitch with their new teammates to start developing some chemistry!

Arse Is the best

He leaves when he wants !!!

cant wait for the city game! Mercenaries vs Legends and ONE hidden (cunt) need a clue! well you must be ambitious enough.

This two guys wil be interesting to watch

When is the match?

So does that mean that Sagna is going on the preseason trip? Obvs he won’t be anywhere near playing yet, but it’d be good news if was fit enough to travel (and train?)

I quite like the way the Chelsea team is shaping up too, its got no fuckin Drogba. We’ll beat them home and away with those technical, midget purchases of theirs. I’d have been worried if they’d have bought Giroud, Nzonzi, Capoue, Subotic or even freakin Caroll. As it stands Bosscielny has the best defender tag in his pocket, alongside those smurfs

Amongst all the RVP fog, I forget how exciting these two signings are. Think, if you will, to a happier place where RVP had put pen to paper and we’d already signed these two, people would really be talking us up. We are still short of players to really improve the squad, but my hope for this window was to sign big, physical players who will add another dimension to what we have. Job done. They are perfect in that respect. Another tricky attacking midfielder (especially if Arshavin goes) a keeper and a replacement for RVP should he do the… Read more »

@ sammy. Always look forward to start of the season, looking forward to seeing our new front line and what it may bring. But if I’m honest last season and now this. Are the only two seasons I’ve really felt we can’t win anything. Even in our shit days of the early eighties I thought a cup win was Possible on any given season. But now our priority is the league and champions league, two trophies for me that we cant win as the squad stands at the moment, and for me it makes the other two cups harder to… Read more »

nooooo I want to see Podolski,
going to the Hong Kong game… 🙁

[…] back late to pre-season training didn’t go on the tour. And with Arsene Wenger telling people Giroud and Podolski would be playing means that’s […]

Check out Giroud on You Tube. His goals last season were interesting because he is a two footed player who is also good in the air. He is very strong and uses his physical advantage to great effect. . He looks different to other continental players in that he looks to have the physical attributes required in the premiership along with technical ability. This guy won’t be put off by a wet Saturday in Stoke. Perhaps the change in emphasis from the usual type Continental player to a more typically English style striker will give us more options up front.

You don’t need to be match fit to take a flight | FootballNews247.Net

[…] back late to pre-season training didn’t go on the tour. And with Arsene Wenger telling people Giroud and Podolski would be playing means that’s […]