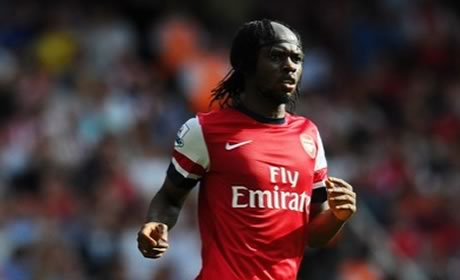 Gervinho. Scored on his pre-season debut last summer, got involved in a tussle with Joey Barton, played quite well in his early games, and then struggled, especially when he returned from the African Cup of African Nations in Africa who play for a Cup.

This season though, the Ivorian feels he’s ready to produce more consistent form and be more effective for the club. Speaking to Arsenal Player, he said, “I hope to push on personally, also to progress with the team and to showcase my qualities. I’ve learnt lots of things, coming to a new club, being new to the Premier League. I’ve learnt to adapt on the pitch and, when I think back, also in front of goal.

“I really feel that I’ve come on a lot, I feel really good in training and I’m ready for my second season.”

After an apparent slump at the end of last season where he lacked the confidence to really trouble anyone or anything but the fingernails of fans as we scrapped for third place, Gervinho feels confident he can contribute more this time around.

“The most important thing for me is to have a good season and win something too. That would represent a good season, progressing, and pulling together as a team.

“I’ve got no doubts about my ability and the manager has shown that he’s got faith in me as well.”

Which is good to hear and he certainly appeared a lot more willing to run at defenders during the Sunderland game than his counterpart on the opposite wing. Not much came off for him but it’s positive nonetheless.

Gerv then said he’d like to emulate Robert Pires at which point I had to stop and breathe deeply because even if he did play like Bob, he’d never look anywhere near as dreamy.

But he can score the goals if he likes. Arseblog News is down with that.

I thought that, apart from Cazorla, he looked our player most likely to make something happen against Sunderland. Most people seem in agreement that he will be better this season than last. Here’s hoping – a massive season for the massive forehead!

a bit more understanding with his team mates and he’ll be amazing! just needs to click.. alot of misunderstandings between him and podolski and carzola.. reckon a few more training sessions & games and we’ll be flying!

It’s at least a sixhead, maybe an eight

vaaaaan persie, is a rapist is a rapist. we need to get this chant going boys

his form post Nations cup poor, im optimistic though that Gerv will be among the top 5 players for Arsenal come end of this season. Ivorians have always served this club well.

yes Eboue had his good days and was loyal to the club…only his abilities let him down….sometimes.

what about the Ivorian legend that is Eboue?

I love the stat about him in the last game, that he’d made the most attacking dribbles (attempting to get past an opposition player) since Cristiano Ronaldo 6 years ago…

By some quirk of fate I appear to live exactly 4 miles from all the single girls in my area. The poor things don’t seem to have much luck in meeting men either as Jane and Sarah have been on here for months.

Incredibly, arseblog seems to have guessed that i would like to meet more Asian girls. Thanks arseblog!

Blackmatch is a great way to meet 1000’s of singles! Do you think that my skin colour has to be ebony to use this website, i sure as hell hope not! 😉

You Guys
Reply to  Smeghammer

You should check out that “Sophia” girl who also lives 4miles away from me! Much hotter than “Sarah”. I wonder why Sophia is looking for a date online, and why with me in particular?!

I’ll update you guys (hehe) on how it’s going…

I wish Sophie lived more than 4 miles away from me. I think i can hear her hooves clickety clacking in the distance.

If stuff is to be believed, Eden Hazard claimed that Gervinho was the best player he ever played with.

who the ‘eck is Eden Hazard?

Apparently there’s an even younger one called Ethan who runs rings around the lot of them. But given that he’s only seven it’s probably down to his size as much as anything else.

I can’t quite remember but i assume it was The Sun that reported that and then when on to slate Gervinho after Hazard said that in an article! The last few weeks has seen much in the way of reporters and other football fans slagging off Arsenal, the players we’ve bought and the way we’ve sold some. I for one hope that this is the year we finally ram the critiques own words back down their throats! COYG

At a sagna cross, the keeper will go for his head instead of the ball. The ball will meanwhile roll onto the path of podolski for an easy tap in. We need to get him inside that box more often.

Here’s to a smashing season for Rick James and the Arsenal.

He will come good. He can beat players off the dribble, seems to have that extra gear in the final third. He’ll score this weekend, I can feel it.

“That would represent a good season, progressing, and pulling together as a team”. I hope he don’t forget to pull Le Coq too.

The only progress he can do is put his thinking and his action in the right order as in his case the latter precedes the former. I`ve never seen a player ending up with the ball on the wrong side of the line as often as him. Not even Theo!

I’m a bit worried that Gerv is a bit fragile mentally, he seemed to bottle it in front of goal and then took ages to recover from the ACN. I’ve a feeling we may see more of him on the right, particulary if Theo doesn’t sign a new deal.

he’s got a very mature head on those young shoulders. I’m sure he’ll come to the fore this season. Just hope we can cling on to him.

The biggest improvement would be if he developed an awareness of where his team mates were, and had some idea of what they were likely to do. Far too often he seems oblivious to what’s going on around him, especially when he has the ball.

If you’re a first time reader I’m sure it’s still funny. Wouldn’t want others to miss out just because you’ve tired of it.

You just got owned blogs lol

You Guys
Reply to  kathuah

Er… Have to agree with this.
Much prefer BFG, Santos the “left back” among others. The Africa etc makes me cringe sometimes as Blogs is so much funnier than that.
Anyway that’s just my opinion gays.
Oh!

I think he’s underrated. He’s going to have a massive season. He draws defenders to himself and causes disorientation amongst back line. Nominating him for 2nd in assists after Santi this season.

I thought his massive forehead came with massive headed goals………oh how wrong I have been. (But keep running rings gerv)

Ha…. if gervinho is in the starting line up you’ll just know. (and a thick cloud cover engulfs the emirates, oh wait, it’s gervinho!!!).

I love him though. I reckon him and cazorla will stand out this season.

Definitely looking forward to seeing more of Fivehead, looks like a great player. If he hits his stride he’ll be a monster for us. Loving his runs towards defenders, you can see them literally shit themselves as he powers toward them. If he focuses on his finishing he could have a very good season indeed.

We need asists & goals from Gervinho!

thought he was pretty good saturday, its that kind of running that can upset teams that park the bus. he will win shedloads of free kicks too.

My memory of walcott is just one!, the superb, unlike walcott performance in 5_2 drubbing of spuds.

Other than that i’ve got nothing, absolutely nothing!

That moment against the chavs, when he got fouled, got back up, dribbled past three stunned defenders and stuck it in the back of the net? That game against Wigan, where we were shit and lost, and he was the only player who appeared to give any sort of shit? That game against Villa where he drove the team forward with his smooth running and crosses? Got a lot of love for Theo, myself. He needs to step up his game, but he’s starting to show what he can do. I’d rather have him at Arsenal than play against him,… Read more »

This is a massive season for him. He’s got to prove this year that he’s worth a place in the team. Last season he appeared to perfect the art of getting into great positions then fucking up. His end product was crap. And he didn’t score enough goals.

Sahin (saying) we sahin sahin, I really do hope he sahins on a permanent basis.
Just sahin.

Zhervinyu looking for progress and success, and a massive fuck off sized hat.

Am I the only person who thinks he looks like one of the aliens from the Argos advert……….

Noticed the communication barrier amongst our players on Saturday and believed it affected the way we couldnt finish. Before I get (sticks) i understand it’s just a matter of time before they(players) all speak one language ‘Football’.

French-German-English
Question mark here over the German as there is no link both ways. The midfield Spanish link cant link further as well.

N.B- When Giroud came on, there was a noticeable success in connection at the front when the German link changed to French.

You’re overthinking the significance of language. Isn’t football a universal language? It’s more about knowing what you’re teammates will do, or want to do – comes with time.

They will all understand the universal language of a kick up the arse from Steve Bould….
As for Theo, in my opinion he’s had long enough already to prove himself and i think he will always lack the one thing that makes a great player…consistency

Song not even on the bench, meanwhile fabregas consistently racks up his bench appearances.

John Terry is still a cunt tho!

Brendan Rodgers just said they are close to signing sahin?… Who the fuck are we signing then. Surely sahin wouldnt goto a club whose biggest achievement so far was being the club zoltan gets scored that goal against