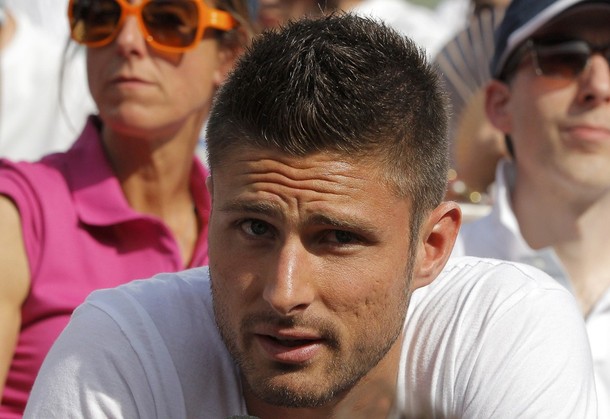 New boy Olivier Giroud says that although he’ll feel some pressure in the wake of Robin van Persie’s departure, and the expectation on him to fill the gap, he’s ready for the challenge.

In a lengthy interview in today’s Observer, the Frenchman says he’d have liked the Dutchman to stay at the club but knows his departure means he’s likely to play more, for all that entails.

“If Robin had not gone it would have been fine, it would have allowed me to adapt more progressively and with more time,” he said.

“But I don’t want to be fussy. I am happy. It works for me, because when you are a footballer you want to play. Inevitably, with Robin gone it will give me more playing time. People will expect a lot, and I really feel the desire to fulfil this expectation. It is better than if I was sitting on the bench.”

Giroud won the title with Montpellier last season and sees some similarity to the the challenge that Arsenal face in the Premier League this season. If Arsenal aren’t quite as ‘lowly’ as his former club, there are other Premier League teams whose resources are enormous. But Giroud believes winning the title is not an impossibility and that last season’s success is a sign that money doesn’t always win out.

“It’s a good example for Arsenal. We don’t have the money of the Manchester clubs or Chelsea. Arsenal builds its team through training, through recruiting players who can become something.

“Arsenal has less money than some other clubs so we have to fight with other values. The collective, the group spirit, is good. We have an important role to play in this championship. ”

“Is it possible to win the league? Honestly, it will be complicated. Because the competition is fierce. But who knows?”

At the same time

Doubt Ollie would want to bang any birds today when he scores!
He is in Stoke!

New song for Giroud . To the tune of Oliver twist by d’banj.

I’m not sure how he’ll fit in today, I mean Shawcross and Huth are ugly fuckers. He’ll stand out like a sore thumb.

you mean he’ll stand out like an attractive thumb.

The beautiful game (in every sense)…COYG

Tony pulis is an absolute cunt, you cannot possibly fathom the cuntishness of this mongrel I tell ya.

“Ryan got absolutely slaughtered at Arsenal.
It’s not a one-way ticket. It would be nice if
we could move on, but I don’t think that will
happen”

This clearly tells us he’s an imbesile who cannot even tell the difference between a player who breaks legs and one who has his leg broken.

That said I hope we really beat them. I mean REALLY! beat them.

Bet Ollie will think the women over there look like some sorta mutated garden Gnome!

C’mon lads let’s get a win against them for me on my 14 th birthday! I really hope that giroud and Ramsey score the goals for us. Come on you gunners!!!

But enough about RvP. Come On, Olivier! And yes, that does have a comma in it.

That made me laugh 😀 Cheers!

Much better than Chamakh. COYG

I'm too Fat for this shit.