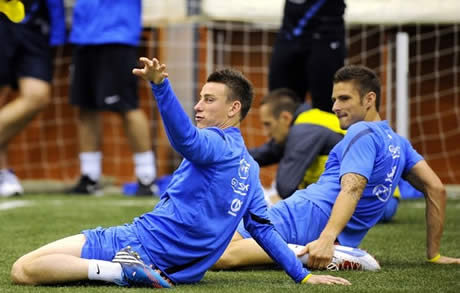 Laurent Koscielny will miss Arsenal’s opening game of the season with a calf strain picked up during pre-season.

The French international withdrew from the midweek game against [insert team name here if you can really be arsed to be find out which you probably won’t be so let’s not worry about it. It’s not important anyway] and has failed to recover sufficiently to face Sunderland tomorrow.

Alex Oxlade-Chamberlain, who suffered an ankle injury during Arsenal’s final pre-season game against FC Koln, also misses out while Theo Walcott, who missed England’s game with a bruised thigh, faces a fitness test.

With regard to new boys Santi Cazorla and Olivier Giroud both are available after international duty but it remains to be seen whether or not the manager will start with them after their midweek travels. Arsene Wenger says he’ll assess the Spaniard after his transatlantic flight to and from Peurto Rico.

well… i was hoping kosser would have a good start, even made a comment about him oozing some confidence and what-not. I still have high hopes for koscielny though.

send in the German!

Vermisacker it is then. 3 points please??! COYG!!!

So, Arteteta IS available then?

How brilliant is it that two of our three signings aren’t up to speed, we’ve lost Kozza and our two Theo’s are doubts, yet we can bring in experienced Internationals and still have a decent team? It’s unreal.

Nicks and niggles, Sunderland at home with Verm and Mert? They should do a good job. Just hope Yennaris is up to the task at RB.

Come on you Gooners. Time to show the EPL what we’re made of.

Surely Jenkinson is going to play at right back.

Will they step up stay fit? Can’t wait to find out

Worry about right back until Sagna returns. Might have been better to have loaned out Jenkinson and buy a proper right back to challenge Sagna.

Still lots of players to leave

Will Arsenal ever get break players with a need for tin cups (money) and injuries at start of new season f*ck it.

I’m sure the BFG is happy he gets to play Sunderland at the Emirates rather than some cow field!

very happy that we have the BFG when kos or the verm faces injuries. Three great defenders.

I have a feeling this season will be awesome for us, it may look drastic to us but i think Le proof is making all the right decision to get us to compete again.Selling RVP and replacing him with both Podoski and Giroud makes both footballing and financial sense and feels he will get in another young understudy to those two before the window closes. Lets sell song and a more defensive DM, then we are good to go

Interesting to see who will start in the DM and LW positions. Pretty sure Gervinho had the edge until the Cologne game where Poldi showed his class. As for DM, I want to see Diaby start and fulfill his world class potential (and not fuck off afterwards). But unsure if Wenger will throw him into the fray straight away. Logic says Coquelin will start there. And if Theo fails the fitness test, I’m guessing Cazorla plays at right, forming a front three off Gerv/Poldi, Giroud, Cazorla, and a midfield of Coquelin, Arteta, and Ramsey. Wow we really have some depth… Read more »

Whoever plays tomorrow will be up to the task. Arsenal 6-0 Sunderland

will Arshavin start for us?