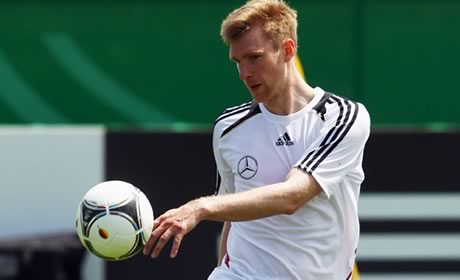 Joachim Löw has bucked the trend of national coaches being complete dicks, especially when it comes to Arsenal players.

Germany are due to play a friendly against Argentina on Wednesday, but in a thoughtful, considerate gesture, Low has left both Per Mertesacker and Lukas Podolski out of his squad.

Explaining his reasons, he said, “The Premier League starts just three days after this game in Frankfurt so it is more important right now for Per, who was injured for a long time, and Lukas, who is fighting for his place as a newcomer, to be able to prepare for their upcoming tasks with their club.”

It makes a change from some who insist on injured players joining up and traveling with their national sides, even when they know well the player is no condition to play. Hats off to Herr Low.

Meanwhile, Mikel Arteta has backed his fellow Spaniard, Santi Cazorla, to make a big impact in the Premier League. Speaking to Arsenal Player, Arteta said, “Technically he is very gifted, he can play wide in both positions and through the middle as well.”

“He is tricky and has two good feet – in fact I could not say whether he is right or left-footed. He will bring us good experience and something different. He will be a good addition to the team.

“The way that we play at Arsenal really suits his qualities and hopefully he will be very successful.”

Arsenal play their final game of pre-season against FC Koln on Sunday with all three of our new signings expected to feature at some stage.

Have always liked Joachim Löw, feel he’s classy and considerate. This solidifies it.

The frustrating thing is, these gestures shouldn’t come as a surprise and should, in all honesty, be the norm.

(classy) Except, obviously, when he’s visibly picking up his nose…

and by “picking up”, I obviously mean “picking”.

Either way it’s a terrible fail.

Someone had to do it. http://www.youtube.com/watch?v=20qtmRFRhgc

One of my favourite quotes form Wenger on international managers.

Gérard (Houllier’s) thoughts on the matter echo mine. He thinks that what the national coaches are doing is like taking the car from his garage without even asking permission. They will then use the car for ten days and abandon it in a field without any petrol left in the tank. We then have to recover it, but it is broken down. Then a month later they will come to take your car again, and for good measure you’re expected to be nice about it.

dmcle’s comment is all true and I totally agree with it, however I think some people don’t see the other (bitter?) truth behind this handling. As a matter of fact (and unfortunately for Arsenal) both Per and Lukas have had a disappointing performance at the euros. Per lost his place to the (justifiably) much hyped Hummels and the same is very likely to happen to Lukas regarding Marco Reus (and Götze will claim a place as well if he comes back). I follow the Bundesliga and the German team quite a bit and that seems to be the general opinion… Read more »

Comes at a time when that idiot of a coach of Belgium has picked our captain Vermaelen for a meaningless friendly.

I’ve always thought he’d make a great manager when Wenger leaves. If there’s no former Arsenal great that’s up to the job that is.

So wenger will one day leave arsenal?
That day will come- yes, but my god fuck that day.

Low or Guardiola. But yes, if SAF can do it that long at Manchester, Arsene will be able to do it too.

Low would be great– top manager even if his record in club football is a bit spotty. Jurgen Klopp wouldn’t be half bad either..

Especially if Low/Klopp brought Gotze/Reus along with them to North London.

Was I selected for the French squad?

Heeeeyyy, seb, I think its about time you and I sat down and had a chat….

Contact my agent, I have a meeting with Madrid tomorrow.

I genuinely cannot wait to see Santi in action. And as for Low, fair play to the guy. And there was me thinking common sense in football was a thing of the past. It lives!

Poldi was left out because he was below par at the euros and mert hasn’t gained full fitness plus matt hummels was obviously always gonna be preffered to him.

Him saying he left them out so that they can concertrate on the epl is just for the papers.

It’s true but we dont like the truth.
Also good thing gomez is out so that the manager won’t have to dilemma to choose between him and reus when obviously reus is better.

I see, so when Loew actually used the words “I’m leaving them out because they have games with their club coming up”, what he actually meant was something completely different.

You actually are a complete goon.

Poldi’z out?, Wait till he bangs in the goals left right and centre against sunderland, then low would really have something to think about.
Either way I care about the arse not some friendly.

Nice one someone with copon

But also, to be fair, he has a wealth of options to choose from, aside for those two and also had plans for the younger players like Reus & co. for qualifying. Nothing against him though, he seems like a good manager with an eye for developing young talent. Sounds like someone we know.

Wasnt loew the agent to bring in mert to Arsenal?
Dont worry loew your efforts will be paid off (2014 winners)we are building a miny German squad here ,just one more help us in getting goetze as well

Very well done by Joachim! I love that he left them out and actually explained why, and the reasons were completely justified. It’s nice to see and hear and quite a few international managers need to take note.

I hate the meaningless international friendlies that come right before or immediately after the beginning of the season. Always results in an injury or two (See RVP vs. Italy or Theo vs Anyone).
That said, Low does have a wealth of talent to pick from and surely won’t miss either Poldi or Per much.

Lets hope he picks Marin to piss of Di Matteo, or should I say John Terry as we all know who the real manager a Chelsea is…

Don’t you know the rules? I have corrected your sentence for you.

Lets hope he picks Marin to piss of Di Matteo, or should I say that cunt John Terry as we all know who the real manager a Chelsea is…

Sorry I forgot, I won’t do it again 🙂

Do it everytime, just don’t ever forget the word cunt before terry……..
I for one have made it his surname.

While you were at it you also could’ve corrected “a” with “or”.

So I guess this is the time to take Man Ures 20 million, just before RVP gets a long term injury playing a meaningless game for Holland :o)

Nice to know that Cazorla can play out wide and through the middle. It’s about time somebody told us that because otherwise we wouldn’t have known. Thank you Arteta

thats good news, i dont know whats happening with all our other players though, i assume there’s lots of friendlies on that day

anyway, its getting closer to kick off now, getting excited!

There’s a rugby match in between those.
Good thing vermaelen is now a shaolin master…….

CMON WHEN WILL THE SEASON FUCKING START ALREADY?

Typing with capslock on no wonder you are frustrated.
BRING ON THE SEASON.

Also, from French media reports, Deschamps consulted with Arsene about Diaby in consideration of calling him up for France’s upcoming friendly v. Uruguay on the 15th. The French national team set-up has for yrs been very keen on Diaby and just as frustrated as we are about his fitness troubles.

After discussing Diaby’s current fitness schedule & training needs with Arsene, Deschamps decided not to call him up.

He’s called up Kos & Giroud, however.

Anyone else think that saf is playing up his “defensive crisis” just to keep people in the manure squad out of this round of friendlies? I feel like vermaelen, kos, and santi should all come off “injured” at half time against koln.

Robin van persie if you leave arsenal for united I will hunt you down in any match you play. I will be caught the first time, maybe the second time too but I will get you!. I will run into the pitch and give you an ass whooping of a lifetime and.how I will do it before the stewards get me you will not know. I wear size 11 boots so expect that somewhere around your arse. I will then look into the cameras and yell gunner for life!!! as i’m dragged away probably for a 2 month sentense somewhere… Read more »

I think pretty much any premier league footballer would probably kick the fuck out of 99% of the people commenting on the brilliant website. I know you have size 11 shoes and all, but leave it, van persie is more than capable of injuring himself…..and you might end up getting your head bicycle kicked off you shoulders.

It is simple really. He is an Arsenal player, under a contract with Arsenal. That he wants to leave and it is rumored he prefers United, will be taken under consideration. However, being that he has a contract at Arsenal it is their prerogative to sell him when and where they like, until the time that his contract is run down. If United really want him, they will pay the asking price. If they don’t want to pay the asking price, he will stay or be sold elsewhere. And yes, it makes perfect sense that the asking price to a… Read more »

I was so searching for the poem.

Mate I think you might want to stop pressing the enter button so often.

The sooner RVP fucks off the better we will be.

Getting bored with all this shite now… I’m finding myself ignoring all RVP comments and reading up on the latest news with Robert Pattinson and that miserable looking tart he was with.

What are you talking ab–