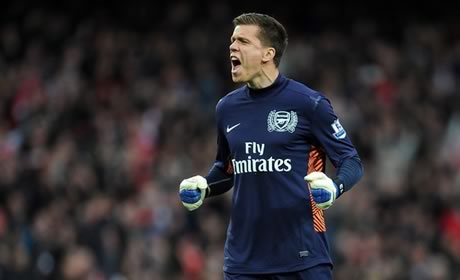 Wojciech Szczesny is facing fitness tests to determine his availabilty for Sunday’s clash with Liverpool.

According to Arsene Wenger the Polish stopper will face a test today and one on Saturday on the rib injury which kept him out of the trip to Stoke last week. Although Vito Mannone deputised well, Gooners will feel more comfortable with the number 1, especially after an outstanding performance there last season.

Wenger also revealed that Laurent Koscielny has recovered from his calf strain and is back in the squad, now he just has to make a decision whether or not to break up the partnership between Vermaelen and Mertesacker that has started the season strongly from a defensive point of view.

The manager also provided a brief update regarding Bacary Sagna and Jack Wilshere, saying, “After the international break they shouldn’t be too far away from training”, with both on course for a return in late September/early October.

Other than that it appears the squad is in good shape but until tomorrow’s deadline at 11pm, it’s hard to make any predictions about who might or might not be involved at Anfield.

I presume the monsters first name is Jalex?

Like the Transformers that could combine into a giant robot. Oh yeah.

Wenger talk I guess.
Just like podolski wasn’t fit to start the season.

I am as bored as a fat kid with a plate of carrots.
Bring on litterpool.

I hate the fucking transfer window. Can’t wait for this to be over. When it shuts I’m going to smash it with a brick, then they’ll have to board it up and it’ll look all derlict and scummy and no one will want to bother with it anymore.

Arsenal 3 – 0 Lollerpool. Very happy with our first two games defensively, the racist may cause a few problems but think its nothing our back four + super goalie cant handle. Just need to get these goals in to shut the press up about RvP and ease the pressure off the new boys. Up the Arsenal!

If our defense can keep up their excellent play I won’t mind either Szcz#1 or Mannone in goal. Especially if Koscielny is back as well. Liverpool don’t present the size worry that other teams do so I’d rather TV5 & Kos as the CB pair ahead of BFG.

BREAKING NEWS:cabaye sign with arsenal it is going to be official tomorow

Wenger have ti start koss against liverpool because of suarez speed and he is most dangerous player , per will be exposed we don’t need his height against pool they don’t play up front with caroll they play two fast player suarez and borini .

yep, makes sense to me. As long as Koscielny is fit enough to start, of course.

Koscielny was really impressive when he played at right back last season.How about not breaking the Vermsacker combination and play Koscielny instead of Jenks at RB?

I’ve got Jenkinson in my fantasy team, so not a fan of this idea, I want those clean sheet points!

So in simple terms you wouldn’t mind him between the sticks again at anfield?.
Nose in the poles or
Pole in the pole.

I will prefer Manone over the pole