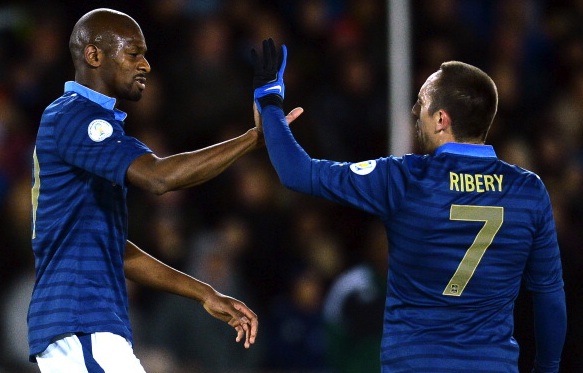 The 26-year-old scored the only goal of the game against Finland on Friday night as he made his long-awaited return to action for Les Bleus.

However, despite earning plaudits for his match-winning performance it appears a combination of fatigue, a slight knock and a minor muscle problem will see him earn a well-deserved breather before Saturday’s Emirates showdown with Southampton.

Speaking to Eurosport Deschamps revealed: “I have a problem with Gael Clichy and Abou Diaby who’ll both struggle to make the game. He took a knock and has some muscular discomfort. Today, he’s not training.”

It remains to be seen whether Arsene Wenger treats the player with the same kid glove hands on his return to London, although it is believed the boss asked Deschamps to take it easy on Diaby after he exertions for the Gunners.

In other news Olivier Giroud is fit to play for France after missing out the other night, while Theo is skipping England’s game with Ukraine with an acute case of the sniffles.

Cheers to @grooverblog for the heads up and @SiuFay for the link.

I Wouldn’t worry yet. Seems like it’s more a precaution than anything else.

Or deschamps is rooting for arsenal.

fkin hate internationals..one of the very few times i hope to see no news in arseblog…it turns out to be injuries ..wish its just a precaution.

I think he meant the sniffles.

Abou, I’m here if you need me. Just give me a call.

Will the call agree with the direction it will be taking?, I doubt it.

Diaby’s high five above is positioned perfectly to block the view of Ribery’s face. Ribery would never be sexy enough to play for Arsenal, he wouldn’t even get in at liverpool, and half of them look like the cast of the hills have eyes.
Good to see common scenes prevail with some international managers.

good. He’s seen sense. I don’t think he should have picked him at all given that he’s just returned from injury, but glad he’s decided to rest him. It’s the sensible thing to do.

I don’t understand all this molly coddling of our players on international duty. He was fit. He played well a week earlier. He is the best player in his position for france. So there’s no reason not to pick him, I’d have more of a problem playing him in two games in such quick succession, but Deschamps; in my opinion, has played it perfectly. He’s Given Diaby his well deserved chance to show what he can do for France again after so long out safe guarding his delicate disposition after injury with a 5 day rest. Any Arsenal player starting… Read more »

Apart from, you know, an injury prone player who spent almost a full season out.

Maybe it would be wise to err on the side of caution for his, and the various teams, long term benefit.

Who is this Anam hassan Blogs?, I like him.

Yeah If you take everything I’ve said into account you’d see I essentially agree with you. I just don’t like it to be the case that every time people go out on international duty when they’re fit people start worrying its the same game club or international level, Deschamps has excersized enough caution here not playing him twice in 4 days.

Thank god for a Didier that isn’t a thorn in the backside. Don’t expect him to do 90 mins v Southampton either, treat with caution I say, especially till we get Rosicky & Wilshere back.

we need our top top top Diaby fit for the Southampton game.

Personally I’d let Coquelin have some fun against Southampton. Then we unleash Diaby on Shitty to tear them a new one.

Southampton took City and United to the wire. We are in no position to fuck around.

Nasri is a cunt guys, i’m even afraid of him mixing it up with our arsenal guys(giroud, abou, sagna) and even potential arsenal transfers eg. Debuchy. Cunt.

Debuchy? Have you seen Jenko lately?

Wow! Such a relief. Wouldn’t say I liked the idea of him being picked so early. However, his winning goal would have boosted his moral.
Till he-as well as the others-return in one piece, without holding their muscles or an eye in their palms, I’m afraid I have a serious job keeping my heart beat normal.
Thanks ‘Schamps.

And then you have Stuart Pearce….ucking nob head.

I know right! The stupid cunt. Once a player is playing senior football regularly, there is absolutely no valid reason for him being picked for youth teams.

Good man. Isn’t it nice to see an international manager who actually cares if his players return to their clubs fit for a change.

I’m glad France finally has a manager that isn’t a cunt and got some vendetta against Wenger.

In more good news, happy 27th birthday to the best defender in the world

NO CAKE FOR YOU, SQUID

Squid I’m the player you failed to be

Cant belive pearce wants the ox in the u21s.what a cunt,he loves the attention and drama and it fukin windes me rite up!the point of the u21s is to get players ready for the full squad,so whats the point demoating him?who gives a fuck about the u21s?!he now makes the cunt list-somewhere between terry and rvp

Def agree with resting diaby, and maybe only give him 45 v southhampton, and sub for le coq, just incase, slight knocks tend to worry me these days as anything from a dead leg to amputation above the knee seems to be considered a slight knock in the press

Why is everyone assuming Deschamps is a safe bloke for resting diaby? Diaby might be injured properly.

Has Tommy V not got any spare parts for his endoskeleton lying around that we could use for Diaby? Maybe a new forehead for gervhinho. But then again who could take his spares from him, he would fuck you up and take your clothes, your boots and your motorcycle.

It’s amazing that deschamps says he will rest diaby and already the media are all over it saying that diaby is injured again and going to miss arsenals next game. There are upsides to instant news, but overreaction isn’t one of them

[…] the match against Belarus coming up tonight, Didier Deschamps has decided to rest Diaby because he took a knock and has some muscular discomfort, as the manager put it. Well I’m […]

It is what it is