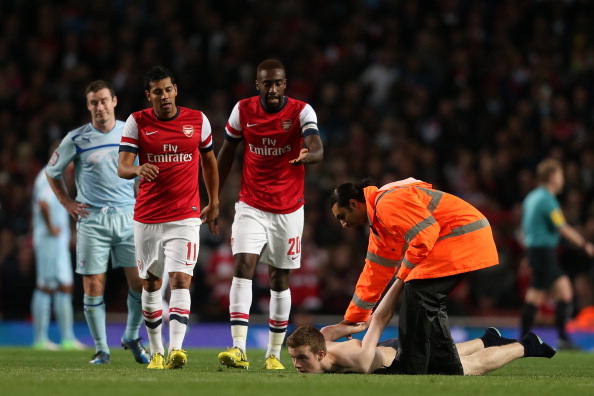 Johan Djourou has stressed his commitment to the Arsenal cause despite being frustrated at what he deems unwarranted criticism for performances made while playing out of position.

The Swiss international was tipped to leave the Emirates this summer, under pressure from national team coach Ottmar Hitzfeld, but insists that he is happy at Arsenal even though competition for a first team place is tougher than ever.

Speaking in the aftermath of Wednesday’s Capital One Cup thrashing of Coventry City, the centre-back, who was made captain for the evening told the Daily Mirror:

“People have forgotten that I am not a right-back. I took a lot of criticism last year for that, because I was playing out of position.

“When you play there for as long as I did last season people assume it IS your position. But it’s not. So, for me, it was a difficult season last year.

“As a player, I didn’t complain about being right-back because I am a team player – I would do anything for my team, for my manager and for my club.”

Now the longest serving member of Arsene Wenger’s first team squad, Djourou also took the time to praise Steve Bould, a coach under whom he played during his teenage years at the Arsenal Academy.

“Steve is a great coach and, to be honest, I believe we can achieve some big things with our manager and with him. He [Bould] was my first manager in the U-15s and U-17s and I have always had a great respect for him.

“Pat Rice was great, but because of the way Steve played the game, it’s just a massive positive for us.

“Steve works on team shape. With Arsenal, people have always blamed the defence for our problems, which I have always felt has been pretty harsh.

“With Steve joining Mr Wenger, it is not only the defence that protects the team – it starts from the front.

“Our midfielders, Mikel Arteta and Abou Diaby, have been doing a great job protecting the defence and that’s what you need at this level.

“The guys are also working hard up front. Now it is the whole team that defends. There is a massive difference now to what we had before.”

When players who can’t even get into the starting line-up emanate positive vibes, it certainly hints at a strong team spirit.

On his day, Djourou is a fine defender, that he’s currently fourth down the centre-back pecking order is a testament to the current strength we have in the position.

The season though is long and with injuries likely to take their toll at some point it’s great knowing a player who is dedicated to the club will be there to step in if needed.

“Djourou: I’d do anything for my team, manager
and club”

Who cares about RVP, fact is it seems the players on the pitch and on the bench are showing the same spirit as Djourou which is awesome!!!!

I don’t think the little kid inside rvp understands anything much really.

Djourou you hero. Also holding hands with Santos in the pic – what a great gay

fair point. let’s not make scapegoats out of ramsey, djourou, theo. if anything, we should point our anger at the opponents. if chelsea’s fans can support misfiring torres, we can do better than this. after all, he’s our academy graduate. won’t be surprised if bouldie had made a man out of him. COYG.

Well they bought Torres for 50m (scoff), it’d be embarrassing if they booed him right off the bat. They’re stuck with him, and yes, we really can do better than that.

“And they can do anything to me, anything”

“As a player, I didn’t complain about being right-
back because I am a team player – I would do anything for my team, for my manager and for my club.”

This is amazing arsenal spirit from djorou, take a leaf theo!

I’d love nothing more than seeing this arsenal team with this attitude lifting the premier league trophy in may.

He’s known him for years, and still calls him Mister!

I think it just shows the level of respect that he has for Mr Wenger and what he has done for his development and career. A few players could do worse than learning from this attitude and try to emulate it

This spirit of this team is fantastic this year.

I think people will see another side to him in Tarantino’s new movie.

the movie is called Django unchained, not Djourou unchained

Now when I seem him I will think Djourou Unchained- once trapped on the bench, now time to take it out on opposing forwards!

Top man. Refused to leave arsenal even after threat of losing his national team number. A true gunner. Take a bow.

I hope Djourou stays on and becomes a solid member of Arsenal, and get a testimonial match.

In the days of outright little kids inside players screaming and driving them to insanity, I really appreciate such loveable loyalty and devotion. He could have walked out seasons ago, and he’s not. What a guy.

A legend waiting to happen

I fucking love Djourou, has Arsenal DNA this lad. *hears Xavi crying from a distance*

Honestly tho, if Djourou cant break into the first team this year, then it might be time to move on for the sake of his own career. Just wanna see him succeed.

Class player, class human. Some others should take notes.

If djourou is happy being 4th choice defender then we should be happy we have got him when we need him. That is commitment to the cause, hats of to that man

Best thing I’ve read all day.
Gotta love a positive-minded player who is hardly getting a gig.
This is what the Gunners need; continuity. We don’t have enough players sticking around for long enough. The team has been changing too much in recent years for us to make any proper title challenge.

I think it’s time we stopped mentioning that dutch cunt, he doesn’t need us and we don’t need him, we traded him to Man utd and got solid commitment and team ethics in return, he may of got more money – but we’re better off !!!

I really wish we stopped mentioning RvP so much. I understand the feeling, believe me. However, sometimes I find myself reading happy positive stories that make me feel good and positive about us at this moment in time, and then I read the comments and many of them still mention a player who did everything in order to make things bad at the club, and it kind of stops the bonhomie and positive feeling the news story inspired in me.

Let’s mention him less and less until we completely forget about him and only focus on the players we have.

The only time rvp should get a mention is in the same blog about Frimpong recieving a red card for a horrendous challenge !!!!!

It’s so confusing when Giroud and Djourou both play at the same time and you’re listening to the game on the radio.

Also when they talk about jerouuuus fine finish for the goal, it gets confusing.

Full agreement with this page. Djourou was maligned when he played out of position and with more playing time began to find his way. His seems such an affable person when you see him in segments. I’m sure he’d love to play more and I think he deserves his appearances, but he also seems to get that the people ahead of him are that good it’s not a shot at him to say he’s resigned to reserve work. I’m proud that we fans aren’t poking fun at him for not being first on the team sheet, which I suspect some… Read more »

Djourou you make music to my ears. That’s the sound of true professional and we love you for your commitment. The sending off away to Newcastle and them getting 4 goals back made you a sinner but you have talent. You are an international and in my opinion good centre back. Not a 4th choice player but such is the quality we have now. Make the most out of opportunities and I am sure you have the talent to break into 1st team. Sorry it might be another club but after your positive words you will always be a gunner.

Its funny how the players call him “mr wenger” and he calls them “boys” has a primary school ring to it. I love the arsenal!

Revelation I had today: I am SO over van persie..can’t be bothered to insult him even..

Thumbs up for my man Djourou!