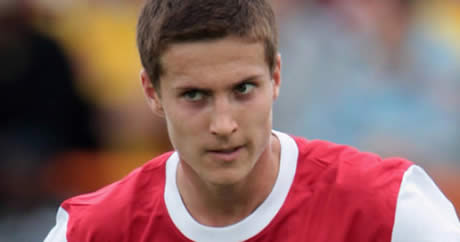 Coventry have signed Conor Henderson on a three month loan.

And … erm … he’ll play for Coventry for three months and then he’ll come back to Arsenal. Unless the loan is extended in which case he’ll stay.

The Coventry manager, who sounds suspiciously like a former Man United player, said, “In Conor, we have a very clever midfield player with a wand of a left foot in the mould of players like Michael Carrick and Chris Brunt who is desperate to play and hungry for it.”

Chris Brunt? What kind of a way is that to welcome a new player to your club? Anyway, good luck to the young Irishman, may the loan do him good.

So, his first game could be against… Arsenal? (Capital One Cup)

The loan probably has a clause in it that he can’t play against us. I think most loans have one.

But Le Prof allowed Afobe to play against us.

I hope this just means him getting more experience, before giving getting a shot for first team action. He’s already 21 so… I don’t know, hope he stays.

On a completely unrelated, Arseblog News needs to use this picture for a future news story! They have to! I mean… it’s just asking for it!
http://www.arsenal.com/news/news-archive/45105/arsenal-train-ahead-of-man-city-pictures?image=29

I love the one of Rosicky and Sagna. You just know the rest of the squad are doing some gruelling physical exercise from which injured players are exempt!

Didn’t Arsene block a potential loan of his a few weeks back? And now he’s joining Coventry who lost their last game 4-1 to Shrewsbury Town? Strange, but I’m sure there’s a perfectly valid reason for it.

Anyway, good luck to the lad. Obviously the fact he’s gone on loan to League One at his age indicates that he’ll do well to get into our first team, but I do like him and I think he should stand out at that level.

gee, where are the times when a 21 y.o. was normally still considered to be a hot prospect for the future…

he is still very much a hot prospect for the not so distant future though!

He is a great player,hope he gets the chance at arsenal

If he keeps on doing stuff like this he probably will, yeah.

In this picture he looks a lot like Alain Delon. The handsome bastard. :O

Haven’t Coventry just signed Mark Robins as manager? Maybe Arsene likes the way Mark gets his players playing and thinks Conor can learn at the same time as improving the squad.

I’d personally like Arsene to allow him to play against us. It’d be a good gauge of his ability to have him play against us. It’s a real shame he did his knee in preseason last year… he could have had loans like t his last season and been a backup for us this year… he looked promising before then. I feel like that year out basically means he won’t get up to Arsenal level quickly enough so he’ll be offloaded unless he’s willing to be a backup for a good few years. Still, I think he can be PL… Read more »