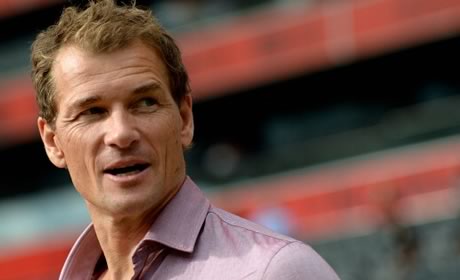 Jens Lehmann says he’s confident that Arsenal can win something this season, and while praising the performances of his fellow Germans says they can do more to help the team’s push for success.

Lehmann, who is currently doing some work at the club as he works towards his coaching badges, believes that the club’s approach and focus on the ‘little details’ might just make the difference this season.

“I’m quite optimistic about the current season and hope of course that Arsenal will win something,” he said in the Mirror. “All right, there are some teams  like Real Madrid, Barcelona, Man City, Chelsea, who come into the game with big money in the bag, and only one of them can win the trophy.

“That shows you that you have to be better at little details in knowledge, wisdom and approach of your team and of your set-up.

The performance of Arsenal’s two German internationals, Per Mertesacker and Lukas Podolski have caught the eye. The former has been a rock at the heart of Arsenal’s newly improved defence, while the new boy has found instant favour by scoring three times already this season.

Lehmann is glad to see it but says both players should push themselves to deliver more.

“Now with Podolski and Mertesacker they have two German players who are very experienced because of their caps in the national team of Germany, I think they’re near 100, both of them are near 100 and still at a young age.

“They are expecting of course to see them performing three times a week on a high level, so far my impression is that everybody’s quite happy with them, but everybody knows that they still have to improve, to adapt to the English football and to adapt to the pace of the game there.

“Lukas and Per are both mentally strong and they have definitely got the potential to perform and to improve their game.”

Let’s hope we seem them both become a better Per. Pair. Sorry.

I’m really impressed with the attitude of the BFG & PODGOALSKI! Especially compared to RVPenis & Na$ri.

I honestly don’t think you can doubt RvP’s attitude on the pitch. He must have decided by Jan at least that he wasn’t going to sign on with us but he tried his best for us. In fact, most gooners thought he would sign on.

Meh to infinity. All that is fucking pointless. Rvp can go fuck himself to the core. I’m glad to see the mancunian style of play isn’t quite suiting him. He’s waiting for songinho like passes to score. He’ll be frustrated most of the time I bet.

He was subbed just the other day. More of those mediocre perfomances please.

I must say that it seems to be a different mentality in the squad this season.

Does anyone else see a resemblance between Jens and Roger Moore as James Bond?

One for the ladies. Jens or Olivier?

So Jens is in London Colney kickising asses. No wonder everybody is shaping up.:D Doing some work indeed!

Who remembers that ball that just slipped through jens’ fingers when it was the easiest of catchs. It was in 2007 against I don’t know which side?. Nonetheless it was jens at his comical best. Lol.

With what he he has said today, I forgive him.

Out of interest, the coaching badges he’s doing, are they to become a manager?

I’m not sure of his overall football / tactics knowledge, being a goalkeeper but he has a lot of traits needed to become a potentially great manager. He’s imposing, strong-minded, a good character and…German.

Anyway, just made me think he could be a good manager. One day.

I love podolski determination n how they tick tack with carzola

More hardworking, talented Germans please. Much prefer them than the petulant money-grabbers of seasons past.

I have a feeling that our Germans are gonna have a positive impact on our English lads…. as it relates to taking penalties…