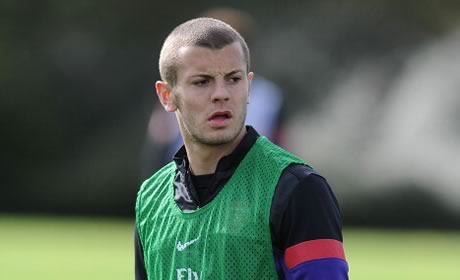 Thomas Vermaelen is back in the Arsenal squad for Saturday’s game against Chelsea. The Belgian missed the 1-1 draw with Man City due to illness (but was well enough to jump up when Koscielny equalised), but has recovered sufficiently to be included for the crunch derby game.

Wenger also revealed that Bacary Sagna is back in full training, although the right back is not yet in contention for a first team place, meaning Carl Jenkinson will carry on at right back. The Frenchman joins Jack Wilshere and Emmanuel Frimpong on the training ground, with the latter having made his comeback in the Capital One Cup last night.

Wenger also revealed Wilshere will play on Monday night for the U21s for an hour and, while urging patience for the England midfielder, called his return ‘massive’. There were updates too on Tomas Rosicky (2 weeks), while Wojciech Szczesny remains sidelined with an ankle problem but should be back in the next two to three weeks.

The form of the team, and some eye-catching performances in last night’s game, gives the manager some headaches regarding selection but in typical Wenger style he batted them off, saying, “I have selection solutions, not selection problems. You want two players in every position.”

“I have selection solutions, not selection problems”

Yeah absolutely brilliant…….We shouldn’t expect anything less from the classiest manager in the game.

Hear that squillaci and chamakh?. You are also part of the selection solution. Confidence booster this one.

I got 99 problems but selection ain’t one, hit me

(Somewhere, Brendan Rodgers is in a corner, rocking back and forth, desperately singing that song to himself).

Problems are opportunities in disguise.

Verminator back… so Kos gets benched ?
Wenger was right , no matter who is left out, it does not feel right. Shows the quality in the team!

Considering on Chav’s midfield like Oscar, Mata, and Hazard, I expect to see Kos partner with TV5 on Saturday.

I’m not too sure as Per’s positional play was so good against City. I’d rather have him and a runner to stop their midfield.

Imagine; they thread a through ball and it looks like it’ll get to the forwards but BOOM, Mertesacker sticks out one of those big legs and the counter is on.

I agree with Dr B. We need Per’s calmness in the back-4 on saturday.

think TV5 may have to wait on bench 😉

Remember what Arsene said in the other post in this blogs. He will rotate his three classy CB depend on the strike type we face.

Pair up verm and koss for this one. The captain verminator is buzzing. He needs the chelsea game or someone might get hurt.

i got confused when you said pair up – as we all know pair is like pear, or Per… thought you had all three of them starting

Somehow i dont trust the concept of him playing for the U21s. A reserve game would have been better

Jack and dench for the u21s on monday so? I assume it’s too soon for Sagna to feature as an overage player?

We also don’t have to trust you. I trust Wenger.

So excited about Jack’s comeback. We missed the lad more than we missed Cesc and Nasri. Special talent.

Fabregas was one of a kind mate and a proven world class player. Just Sayin!!

I’m not saying Cesc wasn’t special or that we didn’t miss him last season just that we missed Jack more mainly because he is committed to Arsenal. He is ours!

No1 goon
Reply to  Lifetime Gooner

I miss King Henry. Hope he comes again on January. 🙁

Welcome back Jack!
Who the fuck is missing NA$RI?

Who is Na$ri? We are talking about football player mate.

Could get used to that, same against Chelsea please!

so thats all our players back from injury, team unbeaten and playing well, scoring loads of goals and conceding very few …

where the hell am i going to get my arsenal-in-crisis fix from now?

at least we have theo’s ongoing contract saga to maintain our crisis quotient, phew

I’m sure CLF and Fatgooner will be around to sort that out for you….

Yea the sun is shining on an rainy ashburton grove, bee, love it:-)

Once the captain’s fit, he goes straight back into the team, Per has been near-perfect, Kos scored the equalizer. I say play all three!

Kos Verm’s the captain, the djourou’s out on who to per with him. (Look at me ma, i’m on top of the world).

Wenger on Drogba: ‘I don’t know if
Chelsea miss him, but we don’t miss
him. He did a lot of damage against us!’

Yes, yes he did. Wenger knows.

Oh my fucking god! Look at Jack on that picture. He has that look Zidane had circa 2006!

another 6-1 demolition at emirate,hopefuly we will have a good game against chelsea too.my predition is 2-1for gooners keep the faith.

It seems we’ve got ourselves the most brilliant manager in the world, “I have selection solutions not selection problems”

Now how many managers can proudly say that to the bloody Media?

Haha John Terry gets what he deserves (though I would’ve banned him for longer and cut off his tongue). Haha. Cunt.

thought i’d share something that i found funny last night on fifa13.
i started the season with jack and sagna and rosicky not playing because i was trying to simulate their real injuries, i had every intention of bringing them in around mid october.
wilshere got narky and asked for a transfer. then my ps3 froze. when i reloaded it he had forgotten that he wanted out hahaha
love that little guy

[…] back in full training but needs another little while before being considered for first team action, Jack will play with the U21s on Monday as he steps up his comeback, while Tomas needs another two weeks or so before he’s […]