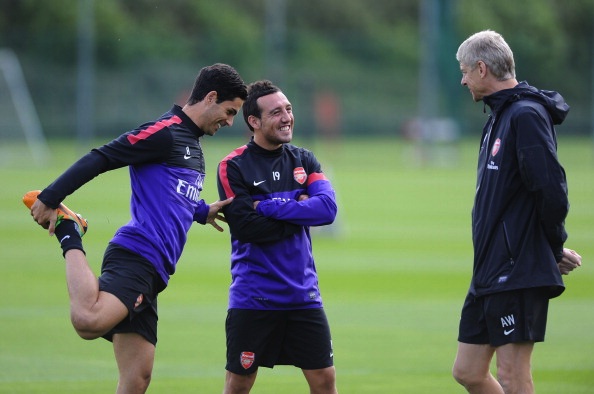 While Arsenal’s defensive solidity and Abou Diaby’s renaissance have rightly had Gooners waxing lyrical, for many supporters the biggest talking point of the season so far is the genius of diminutive new boy Santi Cazorla.

The lynchpin of everything done well against Sunderland, Stoke City and Liverpool, the Spaniard has slipped seamlessly into Arsene Wenger’s system earning the trust and respect of his teammates.

Speaking about the immediate impact of his latest midfield dynamo, Wenger touched on the player’s eagerness to let his feet do the talking.

“Cazorla has gained the respect of everybody very quickly,” the boss is quoted as saying by Sporting Life.

“Cazorla is humble, he loves the game and that is what you want from every football player.

“They talk on the pitch, don’t need to speak too much, just go on the pitch and show what you can do. That is what he does. He loves the game, loves to play with his partners and that is the best way to gain respect from everybody.”

Usually inclined to urge patience with his newest recruits, the boss appears to have seen enough from Cazorla in the last month to negate fears of a prolonged adaptation period.

The most striking thing about our new number 19 is not just the manner in which he goes looking for the ball, but the way his teammates actively seek him out.

What’s more it’s very heartening to see that when he is in possession his first instinct is to push forward.

If that means taking on a man then he relishes the challenge; until Rosicky came good last term we missed that dynamism in the centre of the park following the sale of Cesc and Na$ri and the loss of Wilshere to injury. It’s early days, but he looks a fine contender for signing of the season.

I was the contender one year

You were the contender for “worst signing of the year.”

Hope rvp gets that this year. 4 goals, 24 million. Injury plagued for the season. Out!.

That is if wishes were goddamn horses!

Please blogger the masses demand more updates in your arsecasts about the progress of our greatest striker ‘Nik Bendtner’.

So far he has to go down as my favourite signing for a very long time. Everything in his locker to become another Arsenal legend

Ramsey will find it hard to get much time on the pitch but he will learn a lot from Cazorla. Win – win situation for the Arsenal!

thank fuck for that.

Yeah thank fuck he will get the experience that’s needed.

Most exciting signing since rosicky! I can’t wait to see those two playing together. There will be that many strings being pulled, it will be art.

And my adoration. What a signing.

He’s automatic. He keeps his place no matter who is fit, unless he needs a rest himself. I hope Podolski and Giroud push him for “signing of the season” plaudits, though.

Cazorla he might not be your size but he’ll thread one right through you.

He threads it when he wants.

World class. And I do use that term sparingly.

‘The most striking thing about our new number 19 is not just the manner in which he goes looking for the ball, but the way his teammates actively seek him out.’

That would be my only concern, that we come to rely on him like we did with Henry, Cesc etc. I’d prefer it if they shared the creative responsiblity.

He creates for poldi with his left then lobs it to giroud with his right. Cazorla.

He dribbles when he wants. Cazorla my Cazorla. Another Legend in the making!!

Arteta looks so happy in that picture, he just has to touch him!
The guy looks a bit of a genius and that’s not easy straight away in the Premier League.

Yeah it looks like another bro mance in the making, it can only be a good thing for the team. They will be at Arsenal for there best years, which is a nice.

In general, there seems to be a camaraderie amongst this team, an ‘all for one and one for all’ attitude that will develop over the season and hopefully beyond that.

Speaking of… where is Rosicky?

Amazing aint it? How wenger gives us constant updates on wilshere but never really indulges in rosicky that much. I for one hope he’s well on his way to recovery coz he’s damn well still got it.

At his 29th birthday celebration.

Nothing escapes my wandering hands.

I will mould this two-footed Spaniard into a British Xavi with Arse DNA.

I hope the other guys in midfield can learn from Santi. Ramsey and rosiscky could learn a thing or two from this great player.

Who wouldnt want to be his protege.

” loves to play with his partners”

He is a guy after my own heart

How many languages can Wenger speak? I’ve heard that he can speak something like 6 or 7 languages just came to the realization at how helpful that would be.

(Abou overhears and tells craig to get in line)

He speaks what he waaaaants!

I was under the impression that he speaks French (naturally!), English, a bit of Japanese, very good German (he hails from Alsace, where German is the unofficial second language and most people have at least a working knowledge of it), and solid Spanish and Italian. However, it really wouldn’t surprise me if I’m underselling his linguistic accomplishments. That’s one of the things I love about Wenger: he’s a scholar and a gentleman on top of being a damn fine manager.

What I like about our new boys is the willingness not just to drive forward, but to mix it up. AFC often tries to make the perfect last pass, but quite a bit we end up with 11 assists but no goal. Cazorla will fire a long range rocket to keep the keeper alert, then slip a pass to Poldi the next drive.

Cazorla is the definition of good transfer business- a great player, a need filled, and a great mesh with our existing framework. Let’s hope that Arteta also coaxes him into remaining for the long term.

Cazorla is better than Mata too!!

That’s a good fucking picture at the top of this article.

What I found quite sweet was Cazorla saying that he had a responsibility to do well as Arsenal had spent a considerable amount of money on him! No, really Santi, you were a bargain – no pressure!

He’s always smiling too, quite refreshing and no doubt infectious on the rest of the squad.

He could be the new Eboue

Why are you linking sporting life ? This quote was direct to the media from the boss at his latest press conference. Not hating, just curious.

Wow what a bunch of nice comments. How good it is when spuds fans are not here pretending to be arsenal fans and making stupid comments.

Santi is everything we thought Arshavin would be and more!

At a gay wedding, the
officiating priest was confused
on how to declare the two men
as husband and wife.
After a long silence, the priest said, ”
I hereby pronounce you Man- United”

I hope we can get our other 2 footed midget playmaker back into form too, the chubby russian one

He’s actually got a higher rating in the latest Fifa this year even though he was pretty average last season.Do they know something we don’t?

Cazorla was far from average last season. He carried Malaga into the Champions league which is no mean feat.
Cannot believe we stole him at such a cheap price.
Le Prof is a genuine genius. Oh yehhh
COYG!

im impressed at how quickly he’s settled. he naturally plays the wenger style. i do believe arsenal is the home he’s been looking for. there was an interview with michu recently and he was talking about him. i thought this was a great quote: ‘I remember one funny game,’ Michu says. ‘Santi was on the left, going on the outside and beating two, three players. So good. Then they started saying to themselves, “Push him in on to his right foot”. They did and he beat three players. He is right-footed but they could not tell because he was so… Read more »

oops, i know arseblog hates it when other papers ‘borrow’ his quotes, so i suppose i should credit the daily mail for the above michu quote.