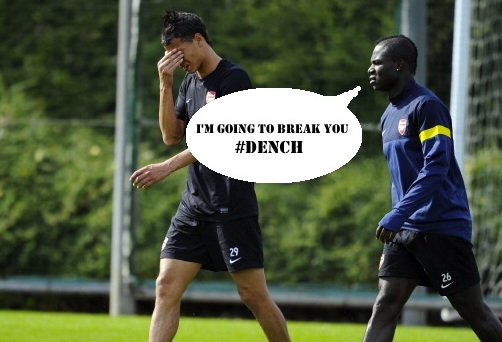 Arsene Wenger is ready to unleash Emmanuel ‘#DENCH’ Frimpong in the COC this evening as the midfield enforcer steps up his rehabilitation from a second cruciate knee ligament injury.

Despite spending two prolonged spells on the sidelines in the last couple of seasons, Arsene Wenger believes his Academy graduate is fitter than ever and will soon be challenging for a first team spot again.

Speaking to Arsenal Player, the boss confirmed that the 20-year-old would play some part against Coventry this evening:

“The good news is that Frimpong will be on the bench, and if possible, we will put him on.

“It’s a big moment because he has suffered for a long time and has worked extremely hard, like Jack [Wilshere].

“You need matches and certainly he will be involved when we play at West Brom [on Monday, October 1] with the under-21s. He’s a competitive boy and a fighter. Of course this type of player always wants to be involved.”

Not short on personality, Frimpong certainly has the enthusiasm and raw ability to make it at the highest level.

A cross between B.A Baracus and Roy Keane, he’s had no problem cultivating an image both on and off the pitch as something of an unhinged midfield assassin.

It wasn’t massively surprising to see him get sent off against Liverpool in his first start at the beginning of last season and we all had a chuckle at the way he blew kisses at the Spurs fans after they’d booed him off the pitch while on loan with Wolves.

Fingers crossed the COC proves a useful outlet for him to hone his talents and offers him a chance to stake his claim for a first team place.

I know Frimpong can be a bit of a cult hero for some, but I really hope he finally starts to show his potential on the pitch this season.

His performance against Udinese was excellent last season, more of that please.

From Frimpong with love.

Letter To vanpersie……
“from frimpong with a strong tackle”

I WILL FRIMPONG YOU!….

That awkward moment when someone tries too hard *covers eyes*

“A cross between B.A Baracus and Roy Keane.”

It’ll be good to see frimpong back and some of the new youngsters but I’m looking forward to seeing Martinez since it’s only him and Shea in the squad hopefully it gives him a chance to challenge the top two, more competition is only a good thing

But first Frimpong will get #BENCHED

Emmanuel, dont you fucking Frimpong me. I have got some medicals to clear

“Aw sucks, Manny, all your denching is gonna wreck my car! Cheese and rice!”

it my boi frimpong!!!

Yay I get to play tonight!

Although I think Le Coq is a better all-round player than Frimmy, I think Frimmy has Arsenal in his blood and Coq has already spoken about leaving on more than one occasion. You can see with Jenkinson and Wilshere how much a genuine love for the club can be a real driving force in games. I really hope Frimpong succeeds at Arsenal, he has a real no nonsense, gritty style that we can sometimes find lacking. My only worry is that his focus isn’t always on football, if that is the case, hopefully Wenger will curb it and steer him… Read more »

From what I’ve seen of Frimpong he can’t pass, is always good for a red card and is more than happy to chop down anything above grassheight.

If I had 11 Frimpongs, I would field them all against Stoke and Allardyce. Who cares for a win when you could watch shawcross get frimponged.

I would pay a 100k to watch frimpong sliding on the edge of the field to accidentally frimpong Allardyce or Pulis.

You, sir, have an idiot’s DNA.

i was just thinking about 5 artetas and 5 cazorlas

what is with this DENCH nonsense?

Someone open that dench door and show this un-dench man his way out.

sorry I’m not a sheep

So if you’re too fucking lazy to do a bit of searching, you’re not a sheep…. Do me a favour. In this day and age, it’s not that difficult to find out anything and everything.

Rather have him concentrating on his football instead of selling some t-shirts with the word dench on them. Makes it worse when sheep encourage this crap!

Haihachi, you sound like a granddad, a twat granddad.

How much time do you think a man can spend on football every day?

How much effort do you think it takes to put the word “Dench” on a t-shirt and sell it on the internet.

I agree with you Heihaci, the boy’s reputation far exceeds his achievements so far in the game. I’d rather he knuckle down and learn his trade rather than draw attention to himself as a self proffessed hard man.

btw he and Lethal Bizzle (and Sway) are cousins. Its not just a business buddies thing.

He seems like a really cool guy, but starting a clothing line in homage to Dame judi Dench is a bit strange, maybe that’s a good thing though, he is obviously an original thinker…….and he looks like he could brake most people in two, which is nice.

Haha Dench is his clothing label with Lethal Bizzle. It’s abit of a laugh lol

Frimpong is little more than a poor man’s Balotelli, more famous for acting like a bellend and selling t-shirts than he is playing football. His social media exploits when he was polling fans on whether it was time for Wenger to step aside tipped the scale entirely for me. Normally I extoll patience with the yoot’s, but I can’t wait for us to offload him to Stoke, QPR or some other teams of clogger’s. Thus far he’s shown himself to be nothing more than a volatile hatchet man willing to scythe down anything above grass height. Don’t think his football… Read more »

Footballer refuses to admit his talent is limited to kicking a pigskin around a pitch, joins forced with talentless rapper who wants inside info on Arsenal, Dench is born, said offenders say “Dench” a lot on Twitter, Arsenal fans nod complicity saying “Dench”. Stick to football Emmanuel! You already put your foot in it with your “y*d” comment. Don’t hang around with clowns like Lethal Twizzle.

he would need to seriously up his playing skills if he’s to become anything other than psychofreakshowmidfieldmascotnothingplayer, but he’s very young and if he can’t improve from training day in day out with that midfield there’s no hope for him

anyone know if henderson can play for coventry tonight?

Apparently not according to BBC.

he sits on the bench
he’s fucking DENCH
Frimpong, Frimpong

sorry, I just don’t have anything useful to say.

Frimmers & Jack are the only survivors from the last youth golden generation. He has been at the club since he was 10 I believe, so saying he doesn’t have the talent is simply laughable as he would have gone by now.

He game isn’t about skill, its about 100% commitment, domination and keeping it simple. Jack and him dovetail very well actually and compliment each others games.

fight against fickleness
Reply to  Matt

Couldnt have said it any better Matt!
His game is to win the ball back quickly and he does that very well.
Very tenacious and fearless a true warrior with Arsenal DNA

Hopefully he can learn from Arteta on how to use his brain and not just his body.

No Craig Eastmond in the squad?

On his way to colchester

But everytime I see Branislav Ivanovic I fucking burst out laughing. Haha.
He walks funny. Lol.

am i the only one who thinks he has a very feminine butt? its really disturbing and he walks like a duck! o_O

Yes. Some say he’s got an ass that just won’t quit!.

Come saturday gervinho is gonna have hik flat on his ass. Just dont get too close gerv, he’ll knock you down when he turns.

I get the feeling that this season and maybe the next will be the make or break time for him. He has been with us for quite a few years now and, while Wenger obviously feels he’s better than the other players in that position that he’s let go, he needs to start showing that he can do well as an enforcer (more Makélélé than Vieira) rather than the Arteta-type deep-lying playmaker.

Hope Eisfeld gets a chance tonight, that boy’s gonna be big.

“DENCH baby”
I didn’t know we still have the likes of Sqallaci and Chamack!

No we only still have chamakh and squillaci.

John Terry is a cunt

eleanor
Reply to  the only sam is nelson

I think we already knew that.

Midfield Corporal
Reply to  the only sam is nelson

Bravo sir, all this Dench nonsense and we forgot the basic formalities.

Right now “cult hero” is exactly the right word. The kid is like a bull in a china shop out there. Maybe seeing all that red on the pitch makes him see red? Regardless, I hope he can reign it in a bit and become a controlled enforcer…not a red card waiting to happen.

For all the talk of him being volatile and tenacious, the boy can actually play aswell. Add his clear love of the club, then you have the ingredients for a real asset to the squad (and hopefully first team long term).

Good luck to the lad and COYG

STOP IT…… Not only is it the same, its bloody hard work reading it

All those talking shite about Frimpong, give him a chance. Song was in the same boat and eventually turned out to be a good player. And a diva.
So chill out.

Frimpong has had two very serious knee injuries at really unfortunate times in his career so far, he was really starting to find his feet at Wolves. Think a January loan will be on the cards
Personally I’d give him a season-long loan next season as well see how he holds up

Keep an eye on Eisfeld and Gnabry tonight lads, they are stars of the future.

He’s a growing footballer but you have to give a hormone-addled kid a break; I expect good things from him in future. Moreover he’s both a gooner and a gunner and I have no doubt he can get things under control. Arsene knows best.

He really needs to give up the twitter though

I should have just said.

yeaaaaa i gone to play too!!!!! anyone how a ball look like i m a little rusty after my Barca move fall through but dont worry football is like riding a bike right .

A mate just dropped out so have a spare upper tier ticket near the middle for coventry tonight if anyone is in the area and wants it, free and gratis, ring 07534185037