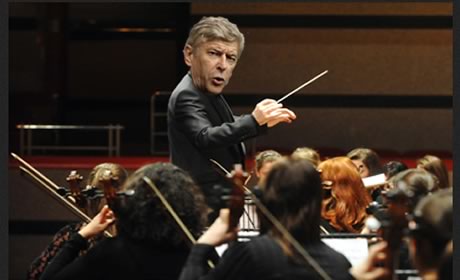 A layman (not Lehmann) might say that Santi Cazorla, Lukas Podolski and, to a lesser extent, Olivier Giroud, have taken to life at Arsenal like ducks to water.

Arsene Wenger, being Le Prof and all, prefers to compare their intuitive understanding of his football philosophy to that of talented musicians instantly recognising the nuances of a piece of music.

“All of our summer signings have already shown they have the Arsenal attitude,” he wrote in his weekly blog for Eurosport.

“Initially because they work a lot in training, but especially because good players adapt well, and have an instinct for what to do at a specific moment.

“It is like if you play a portion of music to excellent musicians – they understand very quickly how to play it, and here it is something similar.”

Lauding all three of his summer acquisitions for their dedication in training, the boss stressed that it will not be long before French striker Giroud matches the impact of his German and Spanish cohorts.

“Giroud has already played several matches, but to see him at his best, it is necessary to give him a bit of time.

“We were happy with how he played in the Champions League against Montpellier, but for the first goal it was a change of position from Lukas Podolski which made the difference.

Detailing the specifics of a goal which he watched unfold from a seat high up at the Stade de la Mosson, Wenger continued:

“He changed position and Giroud was able to play him in. It was a move which is based on our identity: a move between the lines, based on movement and technique.

“Before all that, there were about 15 phases. Then one is likely to bring Podolski in a position to shoot, and in those situations he is deadly.”

Arseblog News did remark before the season began that our new boys were a bit like a boyband; Giroud the muscle-bound dancer, Podolski the icy bad boy and Cazorla the stumpy one with all the talent. We’re willing to abandon this now because it means comparing Arsene Wenger to Simon Cowell – nobody deserves that.

Instead, we shall allow Arsene to cast himself as Le Conducteur teaching the new boys how to play their respective instruments.

And no one wants a long flute solo

He meant skin flute. A ruddy nosed gum chomper of a woodwind.

Did barca play the cecsophone?

I always thought he played the male organ

I wonder why he changed career to playing the pink oboe?

Theo is master of the triangle…

But all he wants is a chance to show how good he is on first violin.

He blows his own trumpet.

Wenger is just a genius!!!! Santi , Podolski and to an extend Giroud are proof of this!!!

also those guys, what were their names? uh… the undefe– no, that’s not it. Oh, the Invincibles, that’s right!

Speaking of, anyone else hear that lovely comment by Ljungberg on MOTD 2?
“I had Lauren behind me, if anyone kicked me, he’d kick the shit out of them”

Yes ofcourse we (Arsenal) move to the beat but barca move to SONG!

Oh I meant to type.
Barca are cunts!

The way this group is coalescing into a real team under the baton of our maestro Wenger is nothing short of thrilling.

All the haters and traitors can kiss the arse of our beloved Arse.

“Giroud has already played several matches, but
to see him at his best, it is necessary to give him
a bit of time.”

What’s that you say media?, oh fuck off. Wenger knows

I am Perry's doppelganger
Reply to  Wale

Spot on. It took Dennis 8 games before his first goal. He got heaps from the press fuckwits too.

Diff’rent Strokes. Wot a programme that was.

didn’t they all end up dead or working in pr0n? i’m sure there was some sort of curse meme associated with it

haha a pre interweb meme at that

Mooro
Reply to  the only sam is nelson

Not sure about Willis.

according to bastion of truth wikipedia willis had something of a problem with crack in his 20s. crack, and stabbing someone in the chest with a kitchen knife. although to be fair the man willis stabbed was attacking him with a sword at the time, apparnetly. also stood trial for mordagh but was aquitted.

Dr Baptiste
Reply to  the only sam is nelson

He also saved a disabled woman’s life, so can’t be all bad.

I’m still surprised that Conrad Bain is still kicking about. He was old when I was young….

It could also be good to practice 90 minutes of 10 men only. I mean it’s not like there’s a trophy to win or anything

To think that the guys at talk sport radio called Cazorla “a poor man’s David Silva” on twitter. They really deserve the name “talkshite radio” although, I would not rule out the possibility that they were just looking to rile people up for cheap publicity. In that case, meh.

It’s a sanctuary for the shock jock presenter. It’s the most base form of radio, say something outrageous and charge people to phone in and tell you you’re being outrageous….then say it again. Next week on Talkshite, is the pope a cunt, here’s Micky Quinn with his opinion.

Heh from the day I saw Jenkinson play for Arsenal I thought he’d be quality for us down the line. Even after the 8-2 defeat last season. Still my Arsenal mates at the start of this season said he “wasn’t good enough” Now I have a big smile on my face with the number 25 on the back of my kit ^_^

So I’m gonna say the same with Sanchez Watt and see what happens.. Lol jk

I’ve seen the pictures on Kickette. Giroud’s instrument is an Oboe.

He can play my banjo string anytime.

I take it he gives you the French Horn?

Ok, I’ve cleared that out the way. Go Arsenal!

I think it’s unfair to cast Mr Wenger as Simon because I don’t think he prefers those v-neck t-shirts Cowell wears. Speaking as a Yank, I have to state quite clearly that Mr Wenger has had much better partners in Bould, Banfield, and Rice than Simon has on Am Idol or Am XFactor.

Then again, Simon had the better looking Cole on his team.

So… someone out there likes Simon showing old chest hair, or thinks Cashley is more attractive than Cheryl… innnnteresting.

Difficult choice. One’s a stupid tart who’ll do anything for the right money and so’s the other.

Oh, I love this Arsenal-Music!

Seeing as we’re on a musical theme, thought I’d share this little gem with y’all. If you thought the original was good, you’ll love this.

D nigerian contigént in arseblog ,..i hail una o! if arsenal decides to release a song it wil defo make sales, i mean we sold an ordinary one to barca for 15million.

Aloha! Just wanna make sure you guys realize the brilliance of Arsene. We should be so greatful to have a manager of such passion. It is obvious the players down the years he has worked with have loved him, rarely do we hear people who have met Arsene talking bad about the man. He has brought so much to Arsenal, only rivaled by SAF. He has changed an attitude of a football club and expectations are always high. I feel he will want to retire when we finally win the elusive Champions League. But when we win the league this… Read more »

“Wenger: The world don’t move to the beat of just one drum”
That’s the answer to Walcott.

wenger is definitely talking to walcott…
And passing an indirect massage about giroud ….
We’ve being dancing to the tune of the music & we’ll keep dancing !!!!!