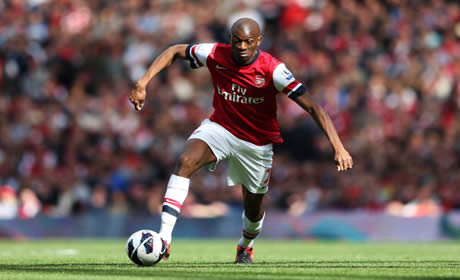 Arsene Wenger has admitted, not that he really needed to, that playing Abou Diaby is something of a gamble because of his injury record.

The French midfielder picked up a thigh strain in the defeat to Chelsea and faces around three weeks out of action, but the manager says that his squad is deep enough to be able to cope with his absence.

“Diaby’s injury record is not good,” he said. “I was concerned about him, of course. It was a gamble but I was calculating as well that Jack Wilshere was coming back.

“Francis Coquelin is here but was sick and Emmanuel Frimpong is back, while Tomas Rosicky is coming back. We have many midfield players.”

Diaby adds a certain amount of physicality in midfield that perhaps only Frimpong can match, and the manager says that’s something of a concern.

“We don’t have many physical players. but Mikel Arteta has shown he can be a great defensive midfield player. We’ll see overall if it was a good or bad decision at the end of the season.”

To be fair to Diaby he has played well so far this season and his brittleness is hardly a shock. With Wilshere’s return imminent and players like Coquelin, Ramsey and Frimpong in the mix too, there are options for the manager.

It’s not as if we’re desperately short of bodies, or that we had a real reliance on Diaby, but let’s hope he can get fit again and continue to contribute throughout the season.

Wonder how far Frimpong is from full match fitness, could be usefull now that Diaby is out.

Abou Diaby got injured? oh. he was fit?

Eisfeld, that was not funny. Now back to trainning.

Don’t worry, gays. I can play that position.

Uhm, are we still doing that joke? Past the sell-by date?

We have plenty of bodies they say.

I can’t see Frimpong doing the role that Diaby does though, that’s more Ramsey/Wilshere in my opinion.

Sky report that Diaby has suffered numerous injuries ‘since his move from Auxerre’, no he hasn’t, he suffered them since his ankle was shattered.
I like go think everytime Diaby goes off injured that Dan Smith feels a sense of shame for what he did.

I don’t think Dan Smith can afford a Sky Sports subscription anymore, so it’s unlikely he ever sees Diaby going off.

It broke my heart to see him limp off. He has been solid the last few games. Being physical and dainty. There has to be a way to keep him fit. Just has to be.

We really missed him in midfield against Chelsea when he went off. Yes he sometimes does dwell on the ball for too long especially in the centre of the park. But he also offers something that no other Arsenal midfielder does – that is his ability to beat a player and then drive through the middle of the park.

All the best mate and hope you get back soon!

lets wish Diaby a speedy recovery but as good as Wenger claims our squad is, an injury to Arteta and i’ll be very worried.

Completely off topic, but its funny how Vermaelen was our best defender(CB), then it was Koscielny and now its Merterseckar, im predicting it’ll be Djourou by January, Pique in March and Squillacci on the last day of the season when he scores to clinch the title. 🙂

Well i can dream i guess 🙁

And by Pique you mean Miquel??!

How did you know?!?
edit button blogs, please!!

i thought maybe he had some inside news about the january transfer market.

I must admit, my first thought on seeing him limp off was the inevitable ‘he’s damaged goods, flog him off at the first opportunity’ bullshit that crosses every fan’s mind at sometime or another when considering a player with chronic injuries, but after thinking about it (and passing the four beers and god knows what else that I had in my system by lunchtime on Saturday, degenerate drunkard that I am), that would seem way too much of a knee jerk reaction. Granted, if the guy were a Grand National horse he would have had a short, brutal meeting with… Read more »

The Cazorla, Wilshere, Arteta type of players – we’ve had them before – and we won fuck all with them together…BUT the Yaya Toure, Vieira type of midfielders – U need 1 of them in your team to complement the smaller, technical type of midfielders – and Diaby is the Closest to that type – and for me having him fully fit & delivering is the difference between being a serious title challenger and a nothing but a strong 4th spot contender ! Having said that Wenger should use Diaby intelligently in games due to his superb injury record I… Read more »

Fellaini would be just great.

Fellaini would be fit just great me thinks. Wenger’s not gonna go for it, though. He’ll keep his faith in Diaby (so do I), and Fellaini will fuck off to one oil-financed cuntland or the other during winter transfer window – something he apparently already hinted. Shame. I can picture his gigantic body sending a message to anyone willing to say same ol’ shit: “Arsenal, they don’t like to get stuck in”.

Fellainin is out of our price ring. Remember we only pay 15 mil max.

Notice how the troll is suddenly back after one bad performance out of the lot.

Giroud is a beauty.
Diaby the beast.
Like the actual book I hope this ends well.

Wenger’s confessions: Diaby is a gamble, Arshavin’s best position is behind striker….seriously? You realized all these after 3years?

Tbf, I think he realised it last year but with Song in the team there was only room for one defensively erratic creator in the middle.

Yeah, I’m happy enough with the Coq in there. I think in this instance it was a reasonable gamble as there’s an Interlull coming up soon (I think) and lesser opposition after this.

unrelated but :-
https://www.youtube.com/watch?v=U6nw8rfiJ3Q&feature=player_embedded#!
can we please get the king back !!

Fucking amazing the man is a legend

Every now and then (most recently after coventry game) someone tries to compare Walcott to Titi. Now tell me if there is a universe in which you can imagine Theo having this sort of composure, touch and vision. This is not to attack Theo, I just think Henry is one of the best footballers in the history of the game, and Theo is, er, our sweet beagle chasing a ball (or shadow).

Comparing Walcott to Henry is along the same lines as comparing Diaby to the great Vieira…..

what can you say about the man!
Back at Christmas?

Giroud sadly another Chamack. can score against poorer lowes sides like Coventry ,cant do against big sides, we need another striker.

Oh….oh…what a piece of shit!

Abou Diaby has not actually ever been that good. He is a liability to the team on the rare occasion he actually plays. He was horrible against Man City last week in the second half. He didn’t step up against Montpellier. He bossed Liverpool for sure but remember what an arsehole he was last year on the same ground. And he is always injured. I can’t think of two or three games ever when he has been really good enough. Accepted he does run with the ball, has a cracking shot but generally he he is not a game changer.… Read more »

I fucking hate CM-punk. What a cunt.

Some might say im crazy but I’ve been thinking.. we should try and play Arshavin as the striker. His technique would do for the lack of physique and he’s a great finisher…
Me think we really should try him there..

You might remember that we’ve been there before. Did not work out too well, did it? and that was at a time when he was a regular starter..

I think in the genre of lanky French speaking black midfielders – Diaby is the most technically gifted. Silky smooth on the ball, mile long stride.

I don’t think his injuries warrant all of the cruel things I’ve been hearing/reading. The guy is cursed but for now, considering the options we have in midfield, we can afford the luxury of having him on the squad

Does anyone know how long is the injury going to keep Diaby out?

I hope he can play right after the intrnull.

Now there is no defensive midfielder, now there is

The point about Diaby – and any player for that matter – is that he has to get a run of months, where he is playing regularly to build up his form to a level that he can then maintain. If he’s in for three matches and then out for a month, it’s never going to work. The guy’s injury record is abysmal – full stop. When he comes back in November, for me it’ll be his last chance. If he collapses again, no matter what the excuse, we are wasting our time. You cannot build a team around players… Read more »

You can’t be an airline pilot without 20/20 vision or a politician without being a cheating lying prick, so, maybe you can’t be a footballer if you can’t kick the ball really hard or run around loads for 9 months at a time. Its not great for the guy but with all the skill and will in the world if you can’t do those two things you are in the wrong job.

The gamble wasn’t going into the season with diaby, as when he’s fit he has shown he’s pure class and when injured we have the cover, the gamble is going into a season with one striker who may or may not come good.
It’s easy to say that we relied on rvp but had we had another decent stoker maybe that reliance would not have been so great.
Not saying giroud will not come good he may well do, but all the same that’s the gamble. As we only then have chamack who we tried to off load anyway.

All this talk of getting rid of Diaby is foolish…Arsene will never get rid and will always play him when he’s fit. It’s nice for the others though…they all know that playing time will be available on a regular basis.

It is worth reading an article on Bleacher Report by someone called Yarison. Normally, he plays us down a lot, but this time I think it’s worth reading. http://bleacherreport.com/articles/1352426-arsenal-vs-chelsea-how-did-arsenal-players-fare-in-the-2-1-loss In short, his point was that our midfield squad depth is not very good. Yes, we have: Cazorla AOC Ramsey Rosicky Wilshere Diaby Arteta Coquelin Frimpong. But the problem for Yarison is that we have too many players in the same mould or the same position – that is, a creative midfielder or at least an attacking midfielder who plays on the tip of the midfield triangle. Cazorla, Rosicky, and Ramsey… Read more »

Ramsey’s natural style is box-to-box as shown at Cardiff, his first season with us before injury and playing for Wales. He was moved up last year due to the departure of Fabregas/injury to Wilshere but the CAM position isn’t natural. Just like Djourou not doing well at RB, Ramsey won’t do well up top

Time for Diaby to go.

Always injured, takes up a place in the squad and a big salary. Time to cut our losses with Diaby and get a new player in.

I like Diaby as a player and he might be top class in some games but the club is suffering by keeping him.

He will be back and he will play important roll this season for Arsenal FC.