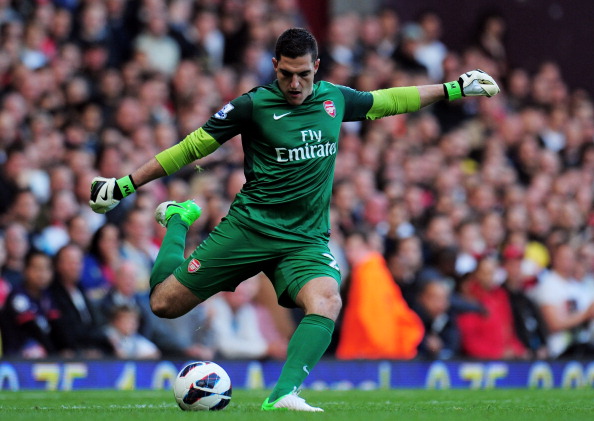 Vito Mannone has pinpointed new boys Lukas Podolski and Santi Cazorla as Arsenal’s stand out performers so far this season and believes that if the squad maintain their focus they can challenge for the title.

The Italian international, who also took time to dismiss any suggestions that he wants to leave the Emirates, said he’s been impressed by the way two of Arsene Wenger’s summer signings have settled in North London.

“All the new lads have settled really quickly,” the keeper told Arsenal Player.“Normally you take a lot of time to achieve that comfortable feeling about yourself in England because it’s not easy.

“It’s a different mentality and different football. I would say Podolski and Cazorla are the main ones; they’ve been great so far. I hope we can achieve something with them.”

Reflecting on the solid start to the season, Mannone assessed that from both a personal and collective point of view, things were looking solid.

“I’m pleased,” he said. “The team is doing great, we had all the big games already apart from a couple.”

“It’s not easy because every game in the Premier League and Champions League is a big game for this club so you need to have the right standard and you need prove to everybody what you’ve got.

“We’ve had a few good wins and a good draws away as well away I think. Not many other teams will get draws at Man City or a win at West Ham or a win at Liverpool.”

“We started the Champions League well as well and the team has a good base to kick-on and I’m looking forward to some good achievements.

Looking further down the line, Mannone also sounded a warning to Arsenal’s title rivals stressing that despite a lengthy wait for a trophy the club has a winning mentality.

“I think we have a good solid squad and we can go for it. I have no doubt, if we keep our focus and keep our mentality it’s not a doubt that we’re going to challenge for the title.

“This club is a club made for victories, this is not a club who wants to do well [settling] for third or fourth place. This club wants to win trophies. I hope we’re going to win trophies and I want to help this team to do it.”

It would take a foolish opponent to cross Don Vito. Let’s hope his warning sends shudders down the spines of opponents across the globe…

Get comfortable listening to frimpongs dench bullshit on the bench. SzcZ is back soon.

Wow! did that frog just kermit a crime against us fans?

I’ll never understand this “frog” guy, he seems reasonable enough coz i know he’s talking sense but he’s advocating for it in such a cuntish manner I can’t even begin to comprehend.

Manners is a concept that few of us grasp, and need to cherish. Eh.

I AM VITO MANNONE!

Shut that your mouth.

how about YOU SHUT UR WHORE MOUTH

I see the interllul is helping us all get in touch with our comical sides. I’m enjoying this but my heart still aches for Arsenal football……baaaah.

why does everyone keep talking about bach ?

sorry , the weekend without arsenal football is taking me strange places

Fuck this Interlull, just fuck it.

Wow…not so fast. Fuck! john terry first then the interlull.

I wouldn’t recommend fucking John Terry. Goodness only knows what you might contract, you’d be on antibiotics for the next decade.

You cannot disrespect a man, who’s face is the reason Vaz Te dislocated his shoulder!

I think he tripped him his nose. No one can evade that shit even when it’s just there on his face minding it’s own business!

Frog had better hide well. Mannone will descend on him like Gerard Butler in Law Abiding Citizen.

Don Vito has already ordered the Armani suits the team will wear when we win the Premier League. He will defeat all the “familes” (teams or cunts) and take control of their turf and they will bend their knees and kiss his glove.

Also heard that he is into bootlegging business a la boardwalk empire.

I don’t think Nucky Thompson wants to deal with Mannone. Let Mannone run his own racket in London and stay out of Atlantic City.

Its bit early to proclaim that Szcz is better than Vito. Sadly,both of them are not world class yet. He’s gaining confidence and composure. If he continues to show signs of improvement, he should be given more chances. Sooner or later, Szcz needs to start matching his words with actions(performances). May the best GK plays.

Would not be surprised if Wenger bought a goalkeeper in January, I think that he could not find the “right” candidate this summer and was expecting one of Mannone or Fabianski to jump ship. Heard Vorm’s name in the ether-gossip. Would not mind that dutch cunt Krul at newcastle, I could forgive his RVP-related cuntery last season since VP cunted off to United anyhow. Wigans al habsi always looks lively, but some goalkeepers thrive on action and cannot adjust to spending most of the game waiting for the opositions 1 shot on goal. Anyhow, I hope Szcz recovers and improves,… Read more »

Pffft. No way. If he was in the market for a keeper he would have bought Lloris. He’s not looking for a keeper. We need a striker.

I’d be well pissed off if we forked out for any of the above keepers, Krul just looks a twat and Al Habsi looks lively cause he plays for Wigan who get battered most weeks…we dont need a keeper of dubious quality, we’ve got one already !!!

I don’t know frog, when it comes to Jenks I think he gives us more Dynamism going forward, but Bac is a better/more solid defender. Whereas Szechny should go straight into the side, I this Bac needs to displace Jenks. That said, as with many young players, Jenks is probably due a rest soon.

Dunno, I say let Mannone keep playing unless he makes a mistake… Why not? He hasn’t made any big ones yet…

I’ve been pleasantly surprised by Mannone so far this season. (Was not expecting to be at all.)

sagna was amazing coming forward after his 1st leg-break…spending those minutes watching other full backs…remember how good he made walcott !
But yeah – they both really good ! tough choice…but id play Sagna – just because he has been no.1 for many years now … and i dont think he’s ever made a mistake ?!
another note : HATE interlulls. have watched the arsenal game about 8 times now…bring me Norwich and bring me more Giroud/podolski/cazorla goals !!

‘It would take a foolish opponent to cross Don Vito. Let’s hope his warning sends shudders down the spines of opponents across the globe…’

Or he will make them an offer they can’t refuse. 🙂

Simple answer is no. I agree with your other statement frog, but it seems having an alternate opinion Is frowned upon in the comments

Having a different opinion is alright but expressing it like a cunt or it being stupid is not.

To be honest, I feel people get caught up in the moment. Vito had a few good games, but ray Charles could tell he’s not good enough to be the arsenal number 1. Carls a gooner and it’s a lovely story, but he’s not anywhere near the level of a fit and fired up sagna. Did you lot already forget how good he’s been for us the past 3-4 years? Best rb in England.

Good. I think you’re basically right. I have to admit though that Carl’s rate of improvement has suprised me, and he’s shown some courage. Looking forward, given Banga’s age, Carl is starting to come through at about as good a time as we could hope for.

If Wenger buys a keeper i will eat my fucking hat !!! He does not seem to place that much importance on that position, he’s put his faith in SZCZ and he’s a stubborn old bugger so like it or not we’ll have to go with what we’ve got.
Personally i’m happy with that and think he should spunk all the £35 mill on a world class striker (no me neither)

Gays, the other day I was just standing around, doing nothing, when I got arrested for impersonating a police officer!.

If you were being a cunt i could see how they might mistake you for one of there own.
Anyway, have you not got any Italian stereotypes about Vito, ……..when he shouts orders at the defense he points with his pinky and forefinger…OOOOH!!!

Just got news that Vaz Te sleeps with the fishes.. (for 12 weeks)