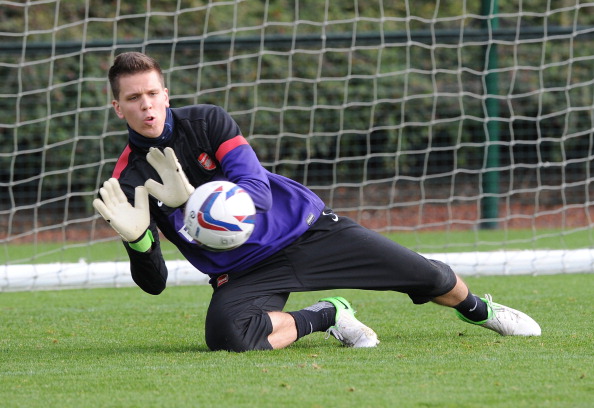 Wojciech Szczesny has returned to full training giving Arsene Wenger a welcome boost ahead of Saturday’s clash with Manchester United.

The Polish international, who made his Premier League debut at Old Trafford two years ago, hasn’t featured for the Gunners since the 6-1 win over Southampton in mid-September when he is understood to have injured his ankle in the pre-game warm-up.

Having been first choice for every (Premier League and Champions League) game in Szczesny’s absence it remains to be seen whether Vito Mannone gets the chance to continue between the sticks. The Italian has had his ups and downs while deputising as the number one, but will no doubt be hoping he’s done enough to give the boss a headache following a decent showing against QPR on Saturday.

The Don has a tough task ahead of him though, especially as the boss back Szczesny earlier in the season: “Wojciech is No. 1 unless I change my mind. That is clear. That’s why he came back in goal [vs Southampton having missed Liverpool].

“You cannot change a goalkeeper every time he makes a simple mistake, because then you have three bad keepers. The confidence is needed.”

Young Argentine Damien Martinez is expected to play in tomorrow night’s Capital One Cup clash with Reading with James Shea his back-up. Lukasz Fabianski remains sidelined having damaged his ankle and is not expected back until next year.

I don’t get it. Please explain.

He’s basically saying that Bergkamp is ‘god’ or ‘our lord’ and is praising him for bringing Szczesny back….. I think

Thank you my son.
You will gun down devils with me this weekend and in paradise.

Believe it or not, presence with Bergkamp is more excitation than 72 virgins could ever provide.

I think it’s a no-brainer that Szczesny starts above Vito when he’s fully fit. Don Vito for all his moments of brilliance is very inconsistent imo.

(Mannone has been solid, no question about that. Without taking anything away from Don Vito and his contributions, I am still not convinced he’s earned the No. 1 spot or taken it away from Szczesny.)

Thank Fuck!
That’s what came to mind after reading the headline.

Szczesny is my choice of No. 1. But for Sat game vs ManUtd, mayb a bit too early for him. Manone most probably has to play…esp his looks hopefully can scare the Dutch traitor!!

Almunia is better than that goat-
faced twin of Daniel Bryan.

De gea got very quick reflexes and when u see him against a penalty kick i fancy him saving them than the player scoring he looks he can fly to either post.
Saying those he is even worse than almunia or early fabianski while defennding crosses or commanding the box.so if our passes dont work we know where to put the ball but the question is will we do the later?

Who the fuck is Daniel Bryan?!?

I’d like Szczesny to start, but only if he feels ready in his mind. Manure are a very attack-heavy team and it could be a confidence killer at best. Providing Szczesny actually is match fit by then of course.

In Wenger I trust for this decision.

Almunia is better than that goat-faced twin of Daniel Bryan.

Halleluyiah!…not to sound harsh to Mannone or anything but sir please step aside!.

I think Wenger badly wants to win this match, for himself, the team and ofcourse send out a statement to that dutch twat.

Praise be to Dennis!

dont think he should start
should be made to win his place back.

How often do you take the medication?

Ehh, that’s a fair enough statement fats. It’s not like szcz is Buffon. he’s been as prone to a goal causing fuck up as Vito. How good did Cesar look on Saturday? What the fuck is he doing playing with that group of muppets. How can QPR get a world class keeper, yet we’ve had one clown after another since Jens?

Beggars can’t be chosers, Frog. Yes Chez isn’t Buffon, but Mannone makes Almunia look like the Italian great at his peak. The real problem, of course, is that our wonderful, fantastic manager has refused to sort out the goalkeeping problem since Lehman left years ago. So now we have only one keeper of any real quality. And he must play if fit.

I don’t think Vito is anywhere near the quality needed to be the arsenal #1. Problem is, I don’t think Szcz is ready to be the number one either. Fact is , spuds have two keepers that are better than ours and QPR signed Julio Cesar. A good keeper is worth an absolute minimum of 9 points a season, we should know. I think we should offer spuds 10 mil for Friedal on jan 1. The pole can learn from him for the rest of the season, maybe next year too………. But we all know Arsene won’t do that. He… Read more »

I understand where your coming from but £10M for Friedel is a lot of money for a 40 yr old.

Yes it’s way to much,BUT….. Let’s be realistic, we’re not going to buy the big name striker we need and it’s going to be a three way dog fight for the fourth place trophy. we have the money, and he’d win us a few games. Plus he wants out of that shithole do it’d be cheaper than 10 anyhow.

Plus, who gives a fuck because they wouldn’t sell him to us anyway heh.

Crap rumour started by a spud dont be drawn into it focus on supporting your own players and spreading malicious gossip about other teams players. Anyway coke isnt a habit, going out with the wrong crowd is the habit, alcohol, drugs and breaking the law are symptoms of the cause.

Cocaine is a hell of a drug!!

He played too much , got injured, played again, and injury got worse. Then he got injured while training too. While he has had a couple of off field incidents, he now has a son, seems more mature.And he always looked like a nice lad (except for the tattoos). He isn’t stupid enough to try cocaine.

No need to get sniffy?

What? If I was rich, 20 and in one of the biggest cities in the world, I’d be getting fucked up. It would be naive to think that anyone in that boat was “not stupid enough to try cocaine”.

not true, i got a friend who knows him, said the cocaine rumour was all a load of crap

He’s not that idiot Gascoigne

@ gee – that would be the same rumour (probably started by the same
spud/chav/sky pundit ) that was heard about Rosicky…it’s all true, obviously!

Hope he can make Old Trafford. Was really hoping he and Gibbs can play, we’d have an alright chance then with no weak links.

I’d take up coke if I got 14 months paid leave!

excellent news, now we just need gibbo and i have every confidence we can destroy at old trafford. does anyone know who’s ref’ing?

3 day ban starts now. Plus one additional day for being the first in the thread to utter that crap.

Fuck yeah! Fuck yeah!
Sorry but this is the most positive I felt about the team since ..since…since Sczc got injured.
The Almunia days of terror came back rushing to the surface, and the presence of Sczsczcszzcz really does calm me the fuck down.
Per+ improved Kos-+Gibbs+Sagna +zcszcscz with Arteta in front of them makes my heart rate a lot more sustainable.
Fuck man united by the way. I hate Feguson, and I am a tolerant and friendly person in real life.
Fuck you classless pig.

hope he starts on sat
he really has poin to prove, after conceeding 8 goals there last season. and he’ll try and sure the greedy dutch badger dosent score
any news on gibbo?

Fabianski out for the year?? Must be cursed.

I read on one of the newspaper that AOC, Gibbs and Szch will return for Saturday. I didn’t believe them but now I do.

@blogs you are right. Don Vito did give AW a headache but not the one you are eluding to.. He has made too many mistakes IMHO – Norwich Goal, Schalke 1st Goal, MCity Goal, Chelsea 1st Goal.

If Sagna can come-in for Jenkinson who hasn’t made a single mistake then why not Sczh.

When do Gibbs and Diaby come back, they are needed for United.

Just saw this. Worth a look http://www.youtube.com/watch?v=tjyitIwgOnY

After 75 apps of being relatively consistent & with some season defining saves, Vito shouldn’t even be mentioned in the same breath as Woj

hope szcz gives us a boost….i’m sad to find out that howard webb is the ref….hope we do well against a utd team that has both the dutch skunk and the ref with them !!

If it’s any consultation the ref is Mike Dean not H.C.Webb

I dont know what foot i use

Am i the only one who thinks we shouldn’t play our best players against the cunts. I mean, i dont want cazorla red carded and missin 3 games for making a fool of ferdinand……..thoughts please

shut up n take my money!

jenks at left back? if gibbo does’nt make it…i think jenks would do alright at lb, especially with podolski ahead of him, we’ll also get a good crossing service too. didnt he play as an lb at charlton? before he made the switch? still a solid choice than our cuddly santos, me thinks!

With the big game against manure fast approaching, apart from the mighty Frimpong, do we have anyone else in the squad with the passion to give that glass ankled two-faced little boy inside grey haired twat, a little ‘reminder’ that he’s disgrace?

That’s the entire reason why frimpong hasn’t been loaned out yet. Only question in my mind is who does he start for? I mean we’re still going to have to compete with ten men after he gets sent off.

I like how you go out of your way to make sure you sound like utter shit. It’s impressive, such consistency.

we need a 100% fit keeper for saturday, hopefully that will be the szcz, otherwise i think we should stick with manone for that game

but its great to have him coming back, along with sagna and wilshere they take our quality up a few notches

I don’t care who starts in goal, I just want someone to take that traitor Van Persie down!

Reading preview: something to prove ‹ Arseblog … an Arsenal blog

[…] Wojciech Szczesny returning to full training and in contention for a first team return. Amusingly, we ran this story on Arseblog News, only for it to turn up on goal.com a good 90 minutes later, almost word for word in some places, […]

» Blog Archive » Reading preview: something to prove in different ways

[…] Wojciech Szczesny returning to full training and in contention for a first team return. Amusingly, we ran this story on Arseblog News, only for it to turn up on goal.com a good 90 minutes later, almost word for word in some places, […]

Mannone against United offence would be tragic

I think Goal.com pulled the article? Still, shameful on their part. Keep up the good work Arseblog & Arseblog News.