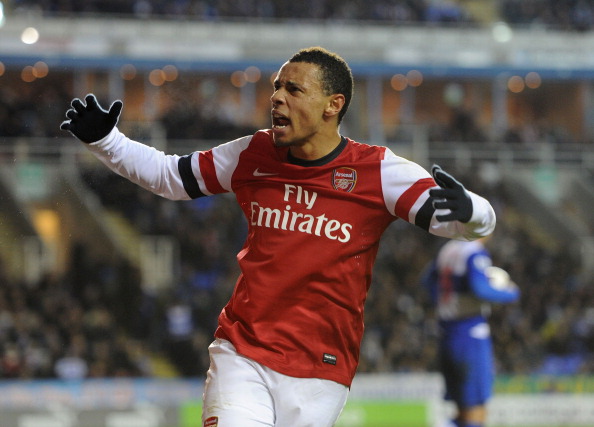 Francis Coquelin insists that playing time is more important to him than being played in his favoured position as he looks to consolidate his status as a first team squad member at Arsenal.

The young Frenchman is effectively first choice back-up to Mikel Arteta in the defensive midfield holding role, but despite the Spaniard’s bill of clean health has still found himself featuring in the centre of the park.

Looking back on his eight appearances so far this season, the 21-year-old told Arsenal Player he’s just happy to be on the pitch.

“I’m happy to get a few chances there [in midfield]. I enjoyed playing full back too last season, I will play anywhere, I just want to play. But I’m really pleased this season because midfield is what I enjoy most.”

While he’s so far garnered playing time in all three competitions, particularly impressing in the COC, the Coq made clear he is now used to being swapped in and out of proceedings.

“Well obviously it can be hard, when you have tasted the Premier League, and tasted the Champions League, you want to play every week.

“But that’s the same for every player, whether you are 17 or 32. I want to play every week. I’m a bit restricted because there are players ahead of me doing well, so I have to be patient, even though it’s hard, and when my time comes it’s up to me to show what I can do.

“I know if I perform well I’ll play. I think every time I’ve been selected this season I have done well, so hopefully there will be plenty more chances coming for me.”

Meanwhile, Arsene Wenger has reflected on the flat atmosphere at the Emirates in recent weeks and accepted it is the responsibility of his side to excite the crowd and not necessarily the other way round.

“We just have to play good games. The atmosphere comes from the team, not the fans, and we have to think like that,” Wenger said.

“The vibes come out with the quality of our game, the fans are behind the team. That is what is about us.

“I agree we had one or two flat games at home, especially against Schalke, even the game against QPR.

“I believe that it is down to the quality of our game – that is our responsibility.”

Does nobody else feel we should give the poor, innocent lad ‘a go’ up front? His youth coach when he was 7 felt it was his best position, and I’m inclined to agree.

Pace, aggression and technical ability. Transfer his timing of the tackle in to off the ball runs and we’ve got ourselves a Hernandez.

I simply think it’s worth a shot anyway. I mean, he can’t be any worse than Chamakh so why not?

You sir, are on drugs.

What? How am I on drugs?

I just think if you take in to account that he’s got acceleration, timing of runs and possible finishing ability. He could *easily* be our Hernandez. You only have to look at his recent performances at DMC to see that he could easily fire us to glory if given a chance up front.

Sol Campball played some of his school football as a striker. Look what happened to him – top class centre half.

I would be inclined to listen to his current manager at 21 years old, rather than someone’s Dad at 7 years old.

If I have told you when he was young, Ramsey’s manager said he would be one of the best right wing that ever was, ahead of the likes of Theo, Ox, Cazorla, Arsha and Forehead.

Any talented footballer will play up front in youth teams, because even a 7 year old Pascal Cygan would run rings round no-hope youngsters.

I’d prefer to see Coq in the hole personally

Please do an article on Santos being a lovely gay. Just like the Coq jokes the Santos gay jokes just never get old, even after seeing the 250+ times here. I mean who wouldnt find a typo on twitter hilarious one year later

By the way, I think there is a typo in the header. Shouldn’t it read:
Coq: Play “with” me anyplace, anywhere, anytime

“Well obviously it can be hard”

Every role’s a goal for Le Coq!

I believe we have enough people at the moment that want to play up front…. he’s actually saying he’d like to play the open full back spot, and quite honestly – I’d have to agree. the Coq over TV for Left Back

really? yet we’re creating absolutely ziltch.
we”ve been playing shite for a while now and just so happens its reflecting on the results. I hope good players like cazorla and young jack dont get sapped into mediocrity.

Yeah, football is just like pro evo and fifa, we can go into settings and change his name, position and skill levels. Yes these games are just like the real thing.

Mertesacker is extremely tall and good in the air but I’d never think of putting him in goal.

Now THAT would be a sight to behold.

Actually, I’d love to see Arshavin or Santi in goal.

Maybe we should play tv5 there too, he got a goal in the Shalke game.

I agree! Our Coq should be used any day, any time, and in every position!

Who doesn’t love playing with our Coq!?

A Coq for All Seasons #filmtitleswithcoqin

The Good, The Bad, and The Coq

The Lord of The Coq Rings

Good lad. We need more players who’d play anywhere just to be in the team. Not players who hesitate to sign a contract just because they’re not being played in their preferred position. Eh? EH?

Coq lad. Him wilshire and eisfield in a few years will be amazing (pre-inevitable sale obviously)

So, if I´m reading this right, Mikel Arteta is in fact a Coq-block.

Oh, Arseblog News, always pulling our leg. Next you´ll be telling us that Arshavin pulls more than Giroud…

I’d be happy to see our coq primed and ready for action anywhere. We need to keep our coq excited at all times, so stick it in any position and see what happens. I prefer him in midfield, but at times I wonder if our coq is hard enough for a holding roll.

I do think that the coq should be thrust in though, perhaps he could lubricate the head and allow more fluidity to flow once we have reached full penetration into the opposition.

I guess he starts tomorrow in midfield.

So our Coq is the Martini de nous jours?

In many respects he reminds me of Flamini, but he’s perhaps a touch quicker – he certainly has the bite and tenacity as well as the ability to pass the ball. But is he better than lego hair? Not yet, no. Let’s just hope he stays happy on the fringes, knowing that he’s in the box seat for the central role when it’s there for the taking. That’ll be a £20m saving, right there.

I would definitely play him tomorrow instead of Ramsey. I know it’s a bit off subject but does anyone know of a pub near the Emirates apart from the Gunners that shows all the Arsenal matches??

the only sam is nelson
Reply to  paulie gooner

The Bailey on Holloway Rd or indeed any of the boozers down there. Wig & Gown is cool on matchdays if you like your white boys (where “boy” = 45+) pogoing to ska etc.

. But I think coq should be a good fit for tottenham. They’re cunts you know so he’ll fit in like a coq on cunt.!!!!

Poor lad, we’ve been disastrous all season and I expect well he should be playing upfront:). I mean Nothing can be worse than Giruod right?

Giroud is the last person in the side who deserves criticism at the moment. He always works hard, which cannot be said of many of the others around him. A bigger problem is that no one seems capable of giving him chances. His movement is good, but the delivery into the box has been shockingly poor recently.
Podolski and Vermaelen have been far worse than Giroud recently, despite being more experienced and more highly rated – why is the focus so much on Giroud?

I don’t agree with your assesment of Giroud. In fact the young man has wasted more chances infront of goal this season than any arsenal player

its really hard to head in non existent crosses, or score tap ins from balls that dont arrive. if there were points for hitting the first defender we would have wrapped up the league by haloween!

look what happened against reading, and wet spam. put it in a headable spot, and watch the onion bag bulge.

lay off the guy, at least he looks like he loves playing for us, and loves us gooners.

The Coq is so hard. I love the Coq.

Coquelin should start left back and Verm can play midfield. Coquelin has the pace and positional sense for the fullback spot (better than Tommy anyway), and can be effective going forward. Vermaelen has been a bit of liability in defence recently, but could be useful in midfield, potentially providing some of that physical power that has been missing since Diaby got injured.

Coq shuld b use as left back…

Pity we don’t have Suker anymore playing with the Coq. Coq Suker.

magic hat I understand his predicament too well but hey he is not the only player to come to the EPL this season. How about Carzola and Harzard? Anyone seen Kevin Miralas, brought in from Olympiacos,a much lower league compared to Ligue 1 where Giroud emerged the highest goal scorer, score goal with ease for Everton? Please we should stop defending Giruod blindly. The poor lad is probably not so good enough for the EPL

Nigerian gunner you clown Giroud has been one of our better players tis season he is a striker trying to settle in a different league a higher level then he is used to playing at!

I like having Coq in a holding position. I personally like it to happen as much as possible.

Great refreshing attitude from the youngster…his time will come for sure..

Whisht
Reply to  A N Other

I agree, I think the coq will come good.

I imagine poor Francis comes on here, reads Coq joke after Coq joke and thinks what a bunch of dip shits. Nobody talks about my football unless it refers to “balls” and “penetration”

Yep, we’re all a bunch of coqs

He is my favorite youngster in the squad at the moment! The rise of Le coq!!!

LOL, did anyone not notice the tags?