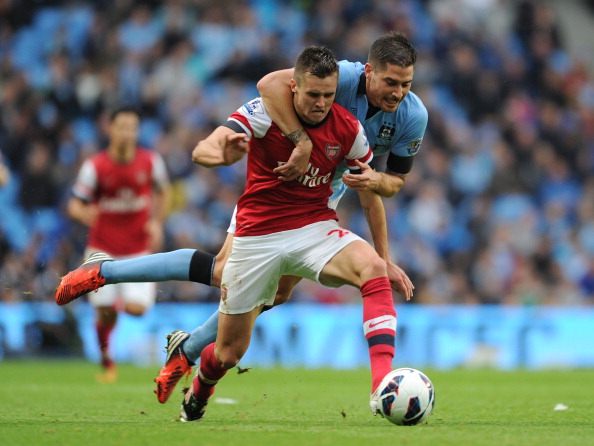 Roy Hodgson has confirmed that Carl Jenkinson will be added to his England squad to face Sweden on Wednesday should the necessary FIFA clearance be received in the next two days.

The Arsenal youngster has impressed in the opening months as cover for Bacary Sagna and was rewarded with an informal invitation to train with the Three Lions before last month’s World Cup qualifiers with San Marino and Poland. Although the former Charlton player has had to sit on the bench since the French international’s return, it looks as though he’s still very much in England’s plans for the future.

Speaking to the FA website, Hodgson revealed the reasons for Jenkinson’s name being absent from this morning’s squad announcement.

“The reason I didn’t include Carl from the start is because we haven’t, at this moment in time, got clearance from FIFA but we do believe that they are going to grant that clearance within a day or two.

“So by next Wednesday, he will be clear to play. He wants to play for England and has made that clear so we applied for permission to FIFA, as one is allowed to do, immediately after he left us and before we set off for Poland.

“That was a month ago, but I didn’t want to put his name down in a squad until such time as I’ve got FIFA clearance saying he’s available to play for us in my hand.

“If the clearance comes through, we will put him in the squad. He was with us for training just before we left for Poland and I made it clear to him then that if he did want to play for England, I would include him in this squad and I intend to keep that promise.”

When Kieran Gibbs and Alex Oxlade-Chamberlain both return to fitness Arsenal could have five representatives, Theo Walcott (assuming he’s not sold) and Jack Wilshere being the others, in and around the England set-up come the next round of qualification matches.

Granted only two, Jack and Kieran, have progressed through the ranks of the Arsenal Academy, but it looks as though the press may have one less stick with which to beat Wenger now he’s helping to forge the next generation of national team talents.

Fingers crossed Jenkinson gets the clearance needed before the weekend, although judging by the travails of Emmanuel Frimpong, who after a year is still waiting for FIFA clearance to play Ghana, it’s far from cut and dry.

UPDATE –  Congratulations to Benik Afobe on his first call-up to the England under-21s. Give Stuart Pearce a kick in the balls from us.

Proud of the lad.

Not as much as his grandad is!. Jenko is basically living the dream. How often does that happen?. Get in jenko, get in!

the update was perfection.

I hope to see him associated with world class quality in the next few years. Im sure its possible if he keeps up his improving gameplay, and i doubt Sagna will stay as our first choice RB for THAT long.

I hate the timing of this but I have to let it out.each season for the last 8 yrs a Kenyan youth commits suicide because Arsenal fail to win a single trophy.the situation is serious and doctors are advising people to stop supporting Arsenal. I love Arsenal but not supporting it its not even a choice. Gooner till the end.

Try harder, make it believable at the very least.

ETID
Reply to  GOONER FROM KENIA

Sounds like you are next. get a life mate quickly. i would suggest that if you feel like you sound you should give up supporting football. The beautiful game is all about winning and losing and also drawing football matches. it is not all about winning trophies, there are many clubs in the last 8 seasons that have not won a trophy far more that have actually won a trophy. but interestingly like the papparazzi you are choosing the last 8 season as your indicator for failure why is that? why not choose the last 9 years or 10 or… Read more »

In my biased opinion he is the best English right back..

someone thumbed down my honest issue from Kenya.have we lost our humanity?

No they thumbed you down because you are quite clearly a cunt!

GarmentDistrict
Reply to  89 Anfield... It's up for grabs now!!!

And your name is gooner from KENIA….

While its correct that Jenkinson is not through our youth academy, I think it would be fair to say that he wouldn’t have been found if it weren’t for AW & his scouting network.

While it maybe debatable that AW may have lost some title ambition, he has lost none of his ability to spot an ability/talent.

Oh yeah. Andre Santos, Gervinho, Park, Chamakh. Gems, all of them. Lets be honest, he’s lost that ability a bit too.

Panic buys. I’m sure many managers would to, having just lost 8-2 as well as Fabregas, Nasri, and Clichey.

Chamakh came in on a free. I have no real complaint there.

Every manager makes mistakes in buying & selling players – Kaka, Veron, Shevchenko, so goes the list.
It’s no surprise that AW makes them too, even during glory days – Jeffers, Suker. However what stands out is his ability to spot talent, then and now.

Have no time for internationals. Hate the breaks and the injuries they cause. But am so pleased for the corp. justification for his form and some consolation for losing out to sagna when he had done little wrong.

He is living all of our dream. Who wouldn’t want to play for Arsenal and then england? Ok, Arsenal is the important bit, but being recognised for that is pretty awesome! Come on Jenks!