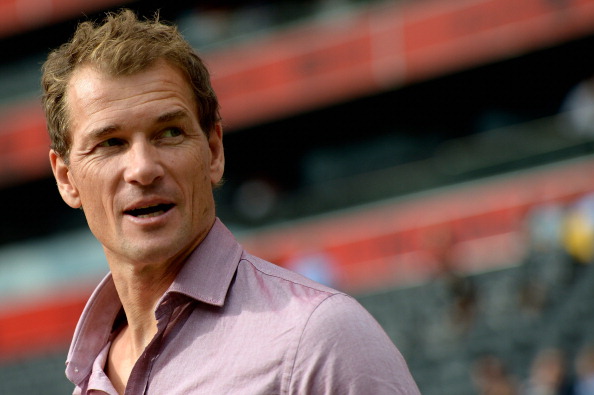 Often angry, once-gloved, swear-monger extraordinaire Jens Lehmann, never a man to mince his words in the heat of the moment, thinks that players faffing around on Twitter and constantly using mobile phones in their daily lives is taking its toll on communication on the field of play.

Yeah, we know what you’re thinking…’mad’ Jens is at it again. However, when you take into account that he’s recently spent time interacting with the current Arsenal squad while he undertakes his coaching badges its hard not to believe his views have been shaped by what he’s seen. Whether he’s right or not is another matter.

Speaking to Inside World Football, Lehmann reflected on the relationship between man and erm…mobile phone.

“When you are not talking properly and you have to think and react quickly to a teammate, it’s difficult when you have the mentality of always having a few seconds more to reflect a little bit longer before typing in something.

“I believe this is having a major impact now on communication. The players may be intelligent but they have lost the art of quick language.

“Being on their little gadgets all the time means they are less capable of giving quick and fast commands on the pitch.”

Directly blaming our recent defensive travails on social media and Steve Jobs is obviously ridiculous, but there could be something in blaming the technological trappings of the modern world on the failure of players to concentrate on a day-to-day basis at the level which is required.

Incidentally Jens is now on Twitter so you can take it up with him.

The man’s a hermit!

You were a crazy motherfucker, Jens, but you were a great goalkeeper. Wish we had you at The Grove right now!

Gooner in Spain
Reply to  Fatgooner

OR yet another excuse to explain how shit we’ve been this season.

At a conference. Completely lost all interest in the lecture, which happens to be on compliance. Now on twitter. The mad German is right.

Sounds perfectly reasonable to me; Lehman is a very intelligent man despite his madcap antics. And he was most probably referring to the current generation of young footballers in general as opposed to Arsenal young stars in particular with his observation.

I agree. More than that when players are faffing around with OxTv or doing twitter takeovers etc etc i can’t help thinking, fucking stop it, go and practise throw ins or something! grrr 🙂 x

So I have two crazy gooners to follow on twitter.
Frimmers and now jens. Santos is not crazy he’s just so “instragramy” with his #trainning morning gooners…tweets.

Gunnerbattalion
Reply to  the only sam is nelson

You should not joke about the intellectual absens in todays youths. Someday it may well be your boy or girl who comes home from school with a big F in English.

Ps. It would be great if the site admin allow editing/deleting your own posts. I know a few WordPress developers who can help out if needed.

fantastic observation!! who would’ve thought gadgets were the evil fiends while we were all blaming wenger, the board, the coaches and the players.

It just gives yet another thing to rebel against to the sickening mass of know-it-all forever-alone eternally-moaning so-called supporters.

I agree and while social media gives us a rare insight into the hitherto unseen mind of a football player, I really couldn’t give two fat poos whether or not Frimpong is whooping Wilshere at FIFA13 on the PS3 but obviously there are plenty that do want to know this information. FIFA are cunts by the way but you knew that.

If on Saturday afternoon we are basking in the glow of a 6-0 victory over you know who, then I will eat my words sign up to twitter and revel in the Arsenal players upbeat tweets.

I remember when all this was just fields and when real men would break their legs and just run it off.

Prematur send. Jens…. is a legend, always something interesting to say.

Come on you gunners BIG performance/result needed this Saturday. Come on!

This is Jens Lehmann’s (JL) Tweet . Every other person who is pretending to act as Jens Lehmann has to stop doing so.

I’ve said it before, so now I’ll say it again. Twitter is for 16 year old girls.

piers morgan is a cunt, twitter is for 16 year olds but he simply doesnt care. I bet he’s the troll over there.

I grew up knowing Lehmann as our crazy good goal keeper more than I knew Seaman. To me, Mad Jens always brings fonds memories back to my heart.

Crazy German, him and Keown both had that perfect blend of professionalism and madness on the field

i dont see how anyone can disagree,the man’s right,its evident in any personal interaction you could have these days