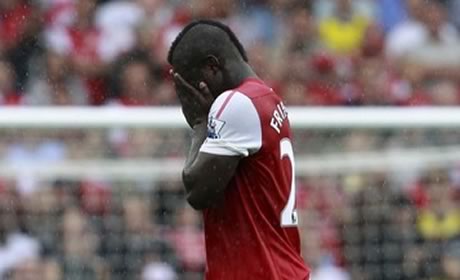 Emmanuel Frimpong is hoping to follow in the footsteps of Alex Song and use a loan spell at Charlton to propel him into first team action at Arsenal.

The Cameroonian spent the second half the 2006-7 season at the Valley, making 12 appearances, before returning to Arsenal a more confident player. And Frimpong wants both to help his new club and use the playing time to increase his chances of making it at the club he’s been at since he was a kid.

“I’m very happy to be here. I know Charlton is a good club which has been in the Premier League for a number of years,” he said. “At the moment they are in the Championship, but I am just here to get playing and help the team push up the table.

“Training has been very good. There have been loads of games and the lads are just enjoying the training, which is nice to see. Everyone is competing to play on the weekend.

“All of the lads have been very nice to me since I’ve been here. They have made me very welcome and it is nice for them to welcome me to the group. Hopefully I can help them as a team by doing well on the pitch.

“The whole reason why I’m here is to play games. I have been injured and for me to come back and play straight away in the Arsenal team is a big ask. The manager just told me to come here, play a few games until January and see what happens. ”

You do get the sense the injuries have really had a negative impact and Frimpong will really need to have a big impact to convince Arsene Wenger he’s ready for Arsenal.

Nobody thought Song would make it for us before he went to Charlton on loan. May well be the same for Frimmers.

true . Song was easily worth 25m as well

Love this lads attitude, true Gooner and true Gunner at heart. Unlike many of those who have preceded him. I hope one day he will be an important player for us!

So he’ll end up at Barca just as he starts to approach the peak of his powers?

I laughed! Wow no one on this site understands sarcasm or humour, its obvious he is joking shiessh why all the thumbs down?

You know people aren’t compelled to upvote someone just because something is sarcastic or meant to be funny.

It’s like saying Piers Morgan is meant to be taken seriously just because he writes with proper spelling.

But, you know, Anon, theres also an option between green and red that doesnt eventually get a comment blocked. Its okay to sometimes not record your response to things just for the heck of it.

yeah but dont forget, the barcelona bench is ‘more than just a bench’

more than a bench.. its a Dench

I really hope he stays with Arsenal. Even though our midfield is like a wet dream with Arteta, Jack & Santi we could do with a natural enforcer for the more physical teams in the league.. I think we miss having a hard bastard like Adams or Vierra in the squad.

Good luck frimmers, hopefully you stay injury free and return to us a better player

To be fair Vermaelen and Koscielny look like they’d be handy in a scrap. And Jack’s come back from injury doubly feisty. We’ve got fighters in this team, but yeah, as Wenger said, you would go to war with Frimpong.

True True Poliver. He offers some extra steel as a natural enforcer. I still wonder how it’ll pan out for Frimmers and Le Coq in the same team fighting for the same position?

I really dont know what to make of the frimpong situation, he seemed okay over the last season (aug-jan). Our injury laden midfield meant more games for him. Then it all went spiral from then on.

Hope this charlton loan, no matter how much of a step down it is, helps him to re-discover his form and mojo. Just like it did for song and to an extent mannone (even though he went to hull)

What? He played about two senior games this season and even then he blatantly said that he wasn’t at full fitness yet.

Breaking: Chelsea to appoint Benitez for an astonishing 3 seasons!!!……..autumn, winter, and spring.

Gedion for sure trained with the Arsenal first team this week. Zelalem is in the latest First Team Training video on Arsenal.com pre-Montepelier. He’s seen breifly at 00:29 (Top Left), 00:42 (Top Left), and 00:45 (Right of Ramsey with no number on his trousers)

Who are they? Apologies, if I’m being oblivious.

The few games he played for Wolves in the EPl he held it together. Even the Spurs game he was beginning to grow in confidence. If he stays fit he will turn out to be a Gunners Legend

Stay Dench Or Get Frimponged!! @Charlton