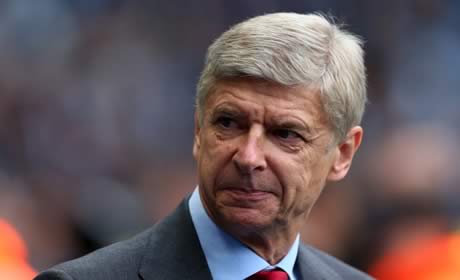 Arsene Wenger was quick to praise goalscorer Lukas Podolski, claiming the power of his shots has the Arsenal keepers quaking in their gloves.

The German hammered home Arsenal’s second after a beautiful set-up by Oliver Giroud, and Wenger said, “It was a superb goal. He has the most powerful shot of anyone at the club. Our goalkeepers dread him!”

And the Arsenal manager was equally fulsome in his praise for his compatriot and former Montpellier man, Giroud.

“Sometimes he wants to come deep, but he is best as a target man. You know he will fight for the team. His performance is many times very decisive. He works very hard for the team and has a good team spirit.”

Wenger was pleased with his team’s performance, despite making it a bit tough for themselves with some uncharacteristically sloppy passing in the first half.

“It was a question of being patient and waiting for our chances, which we did.”

Arsenal will now travel to Greece to try and finish top of the group, hoping tonight’s opponents can take points off group leaders Schalke.

What a great goal. Unbelievable it didn’t go over.
but Damn you Mexes for outshining Podolski

Outshine him me hole, didnt see Mexes scoring for Arsenal

Would’ve fucking blown the goalie’s head off if he’d hit him.

One of the best goals ive seen a player score in a Arsenal shirt, and Giroud pass leading up to the goal was Bergkamp-esque (yes i said bergkamp) the technique was out of this world though, the way he smashed it in, straight bullet!

almost similar to the goal DB10 set up for Ca$hley against Middlesborough after like a few hundred passes put together but less graceful.

Good knock from Giroud again today. Besides the DB10 assist, it was a fantastic knock down for Jack.

And he worked his clean shaven balls off all night.

Thanks for the report on his manscaping.

haha after the link Arseblogger I think put up a while back on the comments board left very little to immagination!

Ramsey would not have scored from that knock-down

Ramsey scored a similar goal against Olympiacos. Giroud flicked it with his head, he chipped it over the goalkeeper from close range.

Amazing goal that. Rvp watching that would have got him off his seat!. But I doubt he was watching, probably was in the gym trainning…….something about ambition…….trophies. A-hole!!!!

LOL… ambition to satiate the urges of his inner child.

i disagree,Big a cunt as he is I bet he was watching and hoping we do well

Being the little kid he is, he was probably watching nickeledeon, CN while housekeeping for rooney!, who was probably at the etihad stalking CR7!

Believe me no matter how you feel about Van Persie, he will never love manure like he loved us, and its only when he gets older he will realise it

Sometimes you just have to do what you personally think is best for your career, right or wrong. He was wrong, but I would rather have Santi, Podolski and the HFB whos looking like a class act

For a moment I thought I saw God in that goal. Then I realized it was just Giroud with a beautiful flick.

Montpelier manager Girard: “We still have a game to play vs Schalke, if we can help our friends at Arsenal to top the group, we will!” Top bloke, french connection in full effect i see :D. Koscielny had a great game again tonight, he’s getting back to his best. Vermaelen was decent, the BFG emulating Messi, Arteta although seemed anonymous was again amazin protecting our back four, inch perfect tackles and passes, Giroud was my man of the match, he was everywhere doing everything right, shame he couldnt round it off withh a goal, but what a player we have… Read more »

Girard and the Schalke manager had a big disagreement in the draw at Schalke, theres bad blood there. Wouldnt be surprised if they turned Schalke over in their last home game in France. I dont mind, we can beat anyone or lose to anyone on our day, one of the great and frustrating things about being a gooner, but how could you be anything else

hahaha summed up the Arse quite well there: beat anyone and lost to any one, cant think of a better description of our club.

Arteta had some great tackles and worked his magic distributing the ball around the field for us. Did seem a bit anonymous, but when I saw some of those tackles/interceptions, I was in awe.

That’s the thing he was just keeping it simple did his job, and nothing extra that made him give away silly fouls in dangerous areas, slotting in when our defenders turned into Maradona and dribble past Montpelier in search of a goal lol. When Arteta is not in the side is when we tend to see how much of a loss he is too us..Such an underated player because of the players who he plays alongside with (Wilshere/Cazorla etc) he tends to get overlooked.

Robin-cunt-persie thought he was the only one who could do that.

We are the Arsenal. Don’t get it twisted.

A clean sheet. BFG and LK6 at the back.

Second half was good… we seemed in complete control of things. (I missed the first half.)

For once ramsey robbed someone of possesion and not the other way around. The fans arousing reception as he came on might have positively influenced his game. Gave him belief that he could play well and he did.

Well said Des…Get behind the lad, he is 21 and a massive talent who needs to be supported and encouraged, and helped by the fans

Yeah, but ‘the fans arousing reception’? whatever it takes to get him to ‘perform I suppose…

“arousing’ can relate to excitement above the waist too

Gon’ save the motherfucking day yeah!

Wow, Ive just taken a look at the group stage standings and i would honestly rather we finished second in the group.

The only two notable teams on top of their group are Man Utd (who we obviously cannot play) and Uefalona (who i would gladly see get pumped at the emirates again).

However, all the teams like AC Milan/Madrid/Bayern etc currently sit second in their group, with teams like valencia/malaga/shaktar/porto and dortmund on top.

This could be a blessing in disguise?

also just got my gooners membership pack delivered yesterday…. finally….. Buzzin to read So Paddy Got Up for the first time after work today.

next round bring on milan or madrid
, than dortmund , than juventus and finally barca .

True, but Borissia Dortmund are playing some blinding football right now. I’d tip them to win the thing, and knowing our luck, we’d have to play them next.

Just happy we’re through when one English moneybag club is out and the other floundering.

Trust me don’t wanna be playing Dortmund in the type of form they’re in.

I think we’ve seen improvements in the team tonight still a little lacking in places but there is no doubt jack getting back to his best made the most impact. He is simply a fantastic player and the ox was impressive too.. Future starting to look a little bit brighter…

totally unrelated, but wow! > http://www.youtube.com/watch?v=qwSRllUtjkc&feature=g-u-u i Imagine that’s quite difficult as well…

Im just so pleased that our goals are being spread around this season rather than depending on one player walcott 9 podolski 7 giroud 7 gervinho 5 cazorla 4 chamakh 2 arshavin 1 chamberlain 1. Thats our 8 attacking players which is good to see rather than just rvp with them all. It make us less dependant on one player. However i still will be much happier knowing walcott is staying i would rather see rosicky in that 8 too instead of arshavin with chamakh traded off for another striker who wenger is comfortable with. chamakh djourou and squillaci must… Read more »

what a goal…beauty and a beast!

anyone else see that cunt RVP try one of these over head first time volleys against Norwich? and FAIL miserably, missing the ball and falling over onto his ass.

Podolski does not belong in the wing, he is a deadly sticker not a winger. 442 poldi Partnering Giroud will have a thumbs up for me

Podolski on the wing? when will people realise we do not play with wingers we play with wing backs for our width. This is like the theo problem he too does not understand that wenger plays with 2 midfields not wingers. one defensive midfield and one offensive midfield. If your 3 offensive midfielders (walcott cazorla and podolski) have 20 goals already this season what is the problem especially when the main striker (giroud) also has 7. even the back up quartet of chamberlain arshavin gervinho and chamakh have 9 goals. We need to stop worrying about the goals scored and… Read more »

what do we worry about then!?

I’m pretty sure Theo must understand what position he plays in.

If you really want something to worry about, think about the way this team has never lost it’s glass chin even though we’ve changed the entire squad and remember the amount of money other teams have to spend on OUR star players and the sheer impotence of contracts when a player refuses to sign.

If not, just enjoy the fact that we’re doing well atm and things might change, that’s the best way imo.

The shot was as fast as a spirit. I’ve watched it over and over again. Weldone Poldi. Now bring on Aston Villa.

Sagna was such a workhorse last night. He deserves credit for the effort he put in.

God damn he’s come a long way in terms of speaking English! (see player.arsenal.com for details).
Apparently he barely knew a word before he came to Arsenal.

And the dread of him pulling numerous red cards seems off so far. What a player…

Can Theo do that?