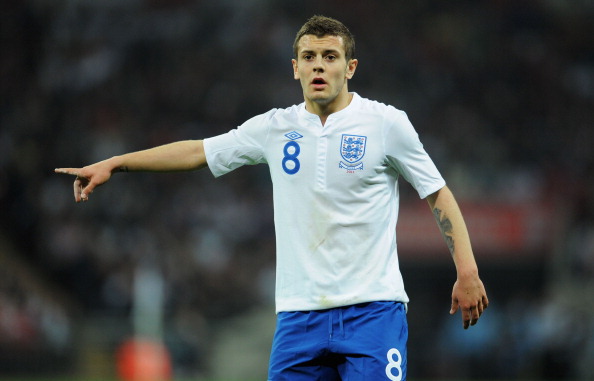 Jack Wilshere and Theo Walcott have been named in Roy Hodgson’s 23-man squad to face Sweden in next week’s utterly pointless international friendly in Stockholm.

After watching Wilshere make his first team comeback against QPR at the end of last month, Arsene Wenger made clear his young charge should not feature for the national team until competitive action gets under way again next year. However, in light of his sending off against Manchester United, which sees the 21-year-old banned for the match with Fulham this weekend, it looks as though the boss has had a change of heart.

It was while playing for England against Switzerland at Wembley in the summer of 2011 that Wilshere, following a tackle by Johan Djourou, sustained the injury that has kept him sidelined for the best part of 17 months.

Naturally the prospect of him donning the Three Lions and charging around Sweden worries the fuck out of Arseblog News but there’s little we can do aside from keep our fingers crossed and hope that lightning doesn’t strike twice.

Walcott’s inclusion comes as little surprise given his decent form in front of goal (interestingly The FA website include him in the midfield section of the list…heh), although Kieran Gibbs and Alex Oxlade-Chamberlain have not been called-up due to injury.

I’m worried for Jack.
Necessarily so, when that Ibrahimovic now attempting to break goalkeepers’ legs.

Roy is a cunt. What else can i say?

the last world class player we have is going to be run into the ground. By ENGLAND. pfft

England are so dumb, let him get fit first and then never use him in friendlies!

Um what the hell?

Sick Leave or something ??

What about me?!?
Aren’t you worried I might get injured too?!? 🙁

Let’s look at it this way.
He would have played against Fulham had he not got sent off.
He still gets a game to bring him back into match fitness and into top form.
Roy isn’t as stupid as people think (though past England managers haven’t helped his case).
May be a boost to Jack’s morale pulling on the national shirt again
He’ll be up to kick the shit out of the S**rs

However, question is whether he would have still been called up regardless of suspension, and unfortunately my opinion is, yes he would

Hopefully it’s just a case of bringing him along in the squad to familiarise him with the set up. Hodgson did seem quite sensible when he spoke of Jack around the last interlull.

And shawcross is in the same team with wilshere and theo… scary. I hope they play on the same side in training!

no call up for jenks?

Hodgson’s a sensible enough bloke not to take the piss.

And it keeps him out of that fuckwit Pearce’s U21 thoughts. He’s such a cock he’d definitely play him for the full 90.

No bad thing considering that Jack’s banned from us. Hopefully he’ll get some match practice and improve his fitness.

Meh, I’m not so worried now that he’s not eligible for Fulham. It’ll be good for his development and should help his fitness levels. As long as he plays, of course.

Woy n the FA r a disgrace to cunts. Why the fuck call up the kid after a few matches? For fucks sake let the kid recover n then consider him or those useless internaionals. n trust me that son of a bitch will play him. Real a*seh*le!!!

That a-word is slang for Arsenal’s toilet. Aka Sp*rs. It would be impolite to any reader to see such a word and think such dreadful, bowel-depleted thoughts.

Roy you awkward old man……..all us gooners are thinking the same thing. You know its gonna happen. Arsenal players cursed or some sh*t. Wenger is thinking…….why???

All faith in Jackie boy for 2014, but for right now he should not be included in the England squad. It’s better for his recovery, IMO, to only be playing club football and rediscovering his form. He’s still got a long way to get back to his pre-injury form.

I like international football. I don’t see the point in mid-event (World Cup/Euros) friendlies though. Especially at the risk of our rising star player barely a month back after 17months out.

I hope Wenger has saod to use him as a sub (and in Wenger style, that would mean him coming on for just the last 10mins, max.

Well.. If hodgson us thinking if building a team around wilshere then he needs to pick him really..

My concern is that both of the teams Arsenal and England are pinning lot of hopes on him and he is only just started.

[…] newly selected for these meaningless games, are Jack Wilshere and Carl Jenkinson. The biggest casualty, however, will be Santi Cazorla, who will travel to […]