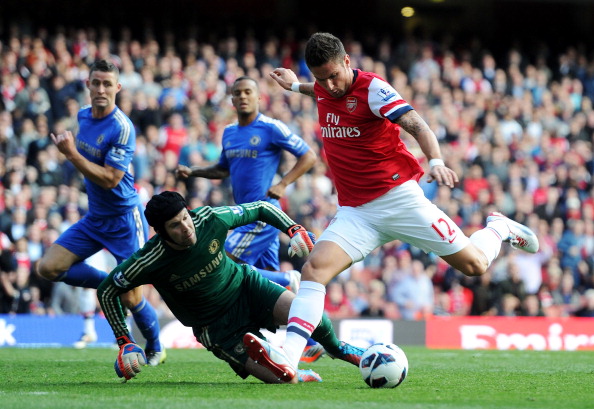 On Saturday French publication L’Equipe printed an interview with Olivier Giroud in which the striker chatted about life in England, the pressures of following in the footsteps of successful countrymen, Arsenal’s title ambitions and some guff about the meaning behind his tattoos.

While some of the above filtered into the British press (“I picked the wrong time to join Arsenal,” screamed the tragically hyperbolic headline in the Mail), less covered were his views on the club’s attacking play.

Accepting that he and his teammates have not been creating enough chances this season, Giroud spoke candidly about the need for more variety in the final third and his desire to see the ball crossed into the box earlier.

“We have to be more effective in all areas of the game,” he stated. “More realistic. More varied, also. We build the game from the back and it takes a while for the ball to reach the attacker.

“I have to adapt to that. When you are a striker, you hope for more crosses, as well. We aren’t very spontaneous when we’re in a position to cross. I’ve talked about that with my colleagues.

“…maybe we have to impose ourselves more on the game. But wait, I’ve got no pretentions to be the manager; just I have the chance to be in a club where we can talk about things.”

Reflecting on the improvements he has made to his own game since arriving in the summer, Giroud made clear that he had been inspired by the quality in Arsene Wenger’s ranks to push himself to a higher level.

“I’m more demanding of myself. More concentrated. More professional. More applied. In training, in matches. When I miss a ball, I say to myself ‘…You have to work on that!’.

“You are surrounded by players more technically adept than before, so you have to get up to their level. I know myself, I can tend to just go with it if I am comfortable. People have always said that. On coming here, I have got rid of that. I am guided by a constant desire (to be better).”

So long as the entire team is driven by a similar desire to improve we shouldn’t have too many problems leaving our current funk behind. It certainly looks as though we’ve made a start after much more dynamic display against West Bromwich Albion.

The above quotes have been translated by @Philby1976 who transcribed the entire original interview into English – you can read it here.

HFB got the right word, we have been too one-paced and predictable. Love his attitude!

Personally I find him very annoying.

His whole mannerisms not to mention lack of technical ability. Cringe /:

I really hope we can find a striker who will relegate this guy to the bench. French crouch.

Ball, back of net. Repeat.

Place on Plate
Reply to  Frog

Ball on his head first, then to the back of the net. His feet are still in france.

Love reading this. Now go bag us a brace HFB!

Very true!!! HFB speaks and the truth is heard.

We’ve become very predictable in our efforts. How many crosses in did we see against West Brom in hopes that HFB would get on the end of it for a header?

ALso, can someone please teach the worlds largest forehead how to finish! My god, how many chances is he gonna flub before scoring again?

are there any updates on his back injury though? i take the lack of news as good news.

He’s out of the game on Tuesday 🙁 check the website

I thought that back injury was a kick to the back.
Either way, Giroud seems like a tough bloke. He’s taken quite a few knocks in the past few games and carried on.

Makes me smile everytime I see that. Love it!

I don’t think your wife is as pretty!

i have never doubted this fellow since we signed him many people want instant results but i can remember one certain Drogba when he came to chelsea, His first season he was nothing special but he turned out to be one of the premier league and europe most feared striker and Giroud would do the same you mark my word on this lad.

“We build the game from the back and it takes a while for the ball to reach the attacker.”

Very true with what he said. We spend too long passing it about between the back four that we allow the opposition too much time to regroup defensively. We need to be more decisive.

you need good outlets to counter attack effectively. Having the likes of gervinho and ramsey, its just too slow, indecisive and predictable. need a better winger

He is a complete beast on Football Manager 2013, 30 goals in 28 appearances so far in my first season!