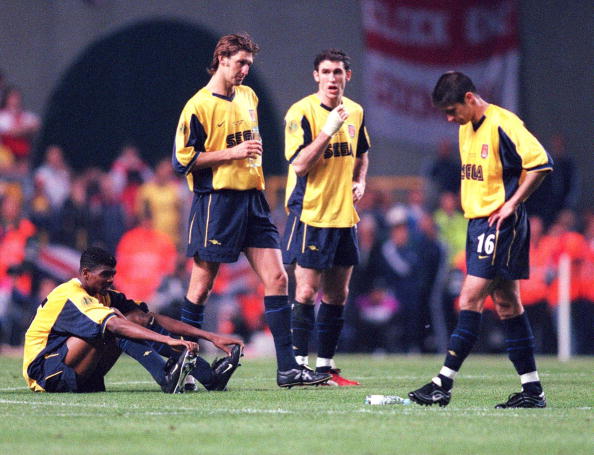 Arsene Wenger has warned his squad that they face a tough test against Bradford City with Phil Parkinson’s side on a good run in League Two.

The Gunners are set to field a strong line-up in this evening’s League Cup quarter-final clash at Valley Parade with the boss particularly wary of the game going to penalties after learning the Bantams have won eight consecutive cup shootouts in just three years.

“We have to win the game in normal time. They have gained confidence in these types of competitions and confidence plays a big part in that. Hopefully we won’t need penalties,” Wenger said.

“Bradford are a force in their league, they are a team who play very good football and very efficient as well. We take them very seriously. They are very efficient at set pieces, so we will have to be very strong on that.”

Wenger knows all too well what it’s like to struggle against Bradford having failed to beat them in his previous two visits in the Premier League 12 years ago.

“Valley Parade was a difficult place to go to when we played there in the Premier League,” he continued.

“It is a passionate place with a very special atmosphere as well. That’s what you will get again in this match.

“I believe when you go to places like this, you need to tell your players that it will be as difficult as a Premier League game, and it will be.

“Therefore you want to prepare yourself. If you don’t do your mental work before the game, you have no chance and that is where our job lies.”

After going 4-0 down at Reading only to win 7-5 Arsenal fans are all too aware that anything can happen in this competition…and that includes being taken to 120 minutes and penalties by comparative minnows.

While Bradford certainly have an enviable record from 12-yards, our own performance hasn’t been too shabby since an horrific six months in the 1999/2000 season when we lost in the League Cup, FA Cup and UEFA Cup final thanks to missed spot kicks.

(Cheers to the memory of @LittleDutchVA for verifying penalty stats)

Did Jack going head to head with Olsson remind anyone of Cesc v. Sheringham a few years back?

Or when cesc tacked a stoke city player, I can’t remember who, and then he started mouthing to the lord of orcs! I thought that was amazing!

I don’t think my heart can take penalties.
Just win in the 90 please. Get behind the boys, COYG!

Playing Football Manager 2013 last night and Arsenal lost 3-0 to Watford in the COC (I wasn’t manager of Arsenal though). I hope it’s a sign that we are going to batter Bradford as they are a totally different team….

I wouldn’t count on it. It only works if you’re David Moyes.

Your reasoning is just absolutely mind-boggling. you should be a philosopher dude.

football manager 2013? If u play any manager game u should play fifa manager 2013 instead… Btw computer games are for monkeys

i have no idea, computer games are for fat virgins :=) looks like the simulator is better then the football manager:s 🙂

Do we even have good penalty takers in our second string?. Yes Arsene no penalties, win game in the normal time and make us a happy lot.
Go all out in the first half, get a two goal lead then second half strategise on how to keep hold of the lead while knicking a few chances for the 4-0 victory. I see eisfeld kicking arse.

If Giroud is out, who will be our striker? That’s always my question.

Obviously it’ll be Chamakh and Gervinho (Or Jerveeno, as they call him on Fox Sports).

Might as well get some use out of the before they fuck off to Africa for three months or however long that shit takes.

I like how you say “that shit”………I would have gone for “CAN” but maybe that’s just me. Arrogant english men!

89 Anfield..... It's up for grabs now
Reply to  THEREISBEARCUM

I think he’s a seppo! But yeah don’t disrespect the cup of African nations for countries from Africa on the continent of Africa!!!

I’m with THEREISBEARCUM on this one. It’s not because it’s African. It’s because it’s international football and it fucks with our season.

Poldi? The Gerv (lol)? A Flock Of Seagulls? Or perhaps Akpom?

There are options I’d think.

Hope Poldi gets a shot up top

Poldi was really poor up top for us at the beginning

Or Gervinho gets a boot up the bottom.

(but thanks for answering anyway, fellow Gooners!)

Don’t bring your hashtags down here. You’ll upset Frog with your youthful writing 😉

“Wenger knows all too well what it’s like to struggle against Bradford having failed to beat the Midlands outfit in his previous two visits in the Premier League 12 years ago.”

Lol, I live in the Midlands and Bradford is quite a bit further north!!! :p

Oh dear. Is it in “The North” then?
Heere be Dragonnes….

There be dragons in the Midlands as well – and anywhere outside of the M25 for that matter!

I would go with a front three of:

I would go with a front 3 of Gnabry-Chamakh-Gervinho

I no longer think it’s funny that you think you know anything about how much these people are getting paid – or that you know enough about the club’s financial situation for what you think you DO know to have any possible import.

I think the point here is regardless of how accurate Rossi88 is with his salary estimates, Akpom could do no worse than Chamakh as Chamakh does sweet FA. I feel for AA, he’s obviously very talented and still produces match winning moments amidst the mediocrity now. I think one of Arsenes biggest mistakes was never playing him more centrally behind a striker. He returned to training pre season looking slimmer but still gets frozen out, I don’t understand why we didn’t let him go on a free and free up his wages if we weren’t going to play him.

Because Arshavin can refuse to go. While the idea of just releasing players is nice, they do have contracts so can turn down our option of a free transfer. I’m pretty sure I read something that stated we offered Chamakh and Arshavin the chance to just leave in the summer for free to find new clubs but as they are still here I’m guessing they said no….

I hate these matches where the opposing side doesn’t really have anything to lose. There’s too much pressure on the better team and the commentators and media love it. In a way, so they should really because we would love it if we saw Sp*urs lose to a league 2 side. But, at the moment where we are so fragile particularly against more ‘bullying’ sides, I feel like this might be a tough match. If I was reading from the Football Manager’s Book Of Cliches I would say, “keep it simple” and “play your game”.

I feel we are ‘mentally strong’- check, have a ‘good spirit’ – check, and hope we don’t ‘play with the handbrake on’ – bingo, full house!!!

Yea yea yea… “Let the ball do the work”… that made no sense when I was playing 5-a-side at 8 years old and still makes absolutely no sense whatsoever.

Looking forward to this one… Been a Gooner since the Graham years (indeed, I briefly lived above The Gunners on Blackstock Rd) but since leaving London I’ve lived in Bradford for a few years now… And I’ve adopted the Bantams wholeheartedly… £200 for a season ticket? Why not! The buzz around the city for the visit of the Arsenal has been a real boost for the whole townand the atmosphere inside VP tonight is going to be pretty special. I’ll be in with the home fans supporting the underdogs but ultimately, will be a winner either way… City have already… Read more »

You live in Bradford Swiftharf?? Were you a low level gangland villain who grassed up Mr Big and consequently put in a witness protection program in a northern backwater for your safety? ……or was it so your wife could be nearer her mother?

i cant stand that dog tshirt advert. makes me feel a bit nauseous

I recreating read, one thing that annoys me though is comments like ‘will they fancy it on a cold wet December night in Bradford’. Do northernerd think its like fucking Barbados in London at the moment? Its only a150 miles north. anyway Arshavins from Russia, podolski Germany/Poland, Rosicky Chech republic, Szchezny Poland, these places have winters as bad if not worse than Bradford. If they’d just said, ‘they probably won’t fancy coming to Bradford’, I’d have no argument.

Yeah, it’s a bit of a cliche… but as long as everyone remembers that it’s a game of two halves then no-one will be sick as a parrot.

However, a bitter wind whistles round VP and without the extra couple of degrees warmth provided by a city full of cheery cockneys with their braziers full of roasting chestnuts then the Arse might well be advised to pack their thermals…

The Bradford lads will be wearing their Long Johns, we’ll have our Onesies on. 🙂

Trust Wenger to be negative! Come on now , penalty shootouts are usually what make the about this Mickey Mouse Cup tournament worth watching .

There is not much fun in watching Prem sides stroll to an easy win over lower class ones.

call me crazy, but don’t we always want to win in regular time? When the fuck do we or anyone ever say “hey, lets make it interesting and try to get to a penalty situation!” I would love to see Akpom given a shot up front alongside Podolski. Sadly the lizard with the dead animal on his head will likely get the start. If he plays like he did against Reading I’m all for it. If he plays like he has in every other game the past 18 months then I’ll pass. Is Theo still out? Anyone but the forehead!!!!… Read more »

Funny how Arsene is building this up to be a challenge. Imagine, in a boxing analogy, Bruce Buffer reading this out: In the Red Corner, fighting out of the uhhh, SOMEWHERE, a league two side, heavily underfunded, with modest training facilities and no star players to name! The underdogs, BRADFORD! In the BLUE CORNER, fighting out of North London, theeeeeeeeeee… ARSENAL! With world class training facilities and stadium. A healthy bank balance, and many enviable stars… INCLUDING, Jack WILSHERE, Santiago Cazorla GonZALEZ! The undisputed heavy… okay I’m getting carried away… There is just no way that we can lose to… Read more »

@ thereisbearcum, who said its funny. My ‘assumption’ is based on lots of different articles publicised around the times we brought these players my guess is they are actually on more. chamack was a free transer, we gave arshavin 100k plus bcos at the time he was kinda a big deal plus barca were interested and gervinho…..well, he was regarded as ligue 1 top player behind hazard. So why they might not be to the penny, they aint a bad shout, you mug. So my point of Akpom, being on a fraction of what they earn, against what they bring… Read more »

We want to see battered bantams on the menu tonight. No messing about with penalties.

We will be fine no worries here !!!

We will be victorious end of story !!!

Bring on the Eis man