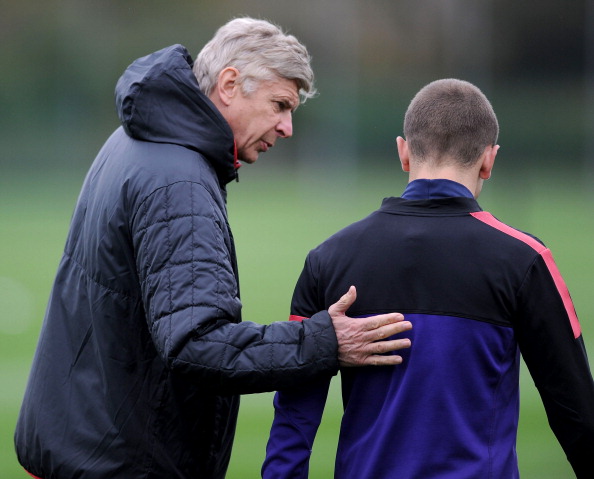 Arsene Wenger claims his beleaguered players are hurting following the defeat to Bradford but insists they are serious about getting the club back on track in the Premier League.

Staunchly defending his squad, even though Ivan Gazidis and fellow board members admitted this week that things have not been good enough on the pitch, the boss even went so far as to claim that the current crop were more focused than some of their illustrious predecessors.

“I’ve had groups who had fantastic results [but] were less serious than these players, believe me.

“Players who were less focused than this team. Of course these players are hurting,” he continued.

“You think they don’t care and they go home and think they had a fantastic game? They do care. We prepare for games seriously.”

Sadly while focus in the camp may well be good on the training ground, it doesn’t take 16-years of coaching the club to realise that several current first teamers find it very difficult to put together consistent performances at the level required.

The ‘Invincibles’ may not have been as focused (hard to believe), but even if they were only concentrating half of the time they’d probably still beat the current group without much of a fuss.

Its these kind of comments that really really annoys me. I don’t expect him to come out and say that they are all fucking shit and should be sold. But saying stuff like ‘this is the best squad we have ever had’ and this recent comment makes him look stupid.
And when Arsene says this team does not lack focus does he mean that they lack the required quality??

Where you do you see him say “this is the best squad we have ever had”? That’s right, you don’t see him say that. If you’re gonna invent things that people say and get annoyed about them you should be worried for yourself

i kinda feel bad for stoph on this one, he had good intentions with his comment but was just ignorant that arsene has indeed said this is the best squad he has ever had

Stoph = the deluded fan Ian wright was talking about!

But yes he did say this is his best squad ever and now says they are the most serious… And that’s just him sticking by his team. The old players like Adams, Dixon, Parlour have said about him that he always stands by his players and we’ve seen that… That’s his style…

brilliant stoph!!!!! made me laugh out loud

So funny I nearly choked.

I completely agree with you nishanth. It wouldn’t be as bad if he stopped defending them all the time! He could take a leaf out of Fergie’s book – scare the shit out of the players – make them focused that way.

well, maybe no need for scaring the shit out of people, but the leaf he should take is honesty. It’s healthier.

Ferguson either speaks his mind or doesn’t say anything.

True but Fergie does not do his players in public, he defends the shit out of his team like Wenger, Mancini, Pubis and every other manager

He says a lot of things that make him look stupid. It is possibly to give the players belief. Remember when he said we would go the whole season unbeaten? At that time it was even more unbelievable then these latest comments.

as they say..
when you have it, you dont need to point it out

its only when the present is empty do people try and bring out the past
…..
and we are doing both of them

I have lost all my trust for Wenger, comments like that just proves that he is a part of the board, making profits is the only thing this club cares about at the moment.

I always try to be positive but when he are talking about the quality this team have, and that they are the best squad he ever had that just makes me angry..

He didn’t actually say that tho..

to be fair, previous squads also had a lot more talent arsene

Thumbs up, not for the comment but for your DP. 🙂

in regards to the comment, I’m serious though. if you have less talent you have to compensate by being more serious. for example, i bet you ljungberg could be taking the piss in training and still finish/cross/pass better than any of our current wingers

A bit too much Arsean?

Sigh, seasoned fans should pretty much ignore Wenger’s press chats. We should focus on the performances. Also anything he says about transfers should be ignored. We should focus on the ins and outs in January. He prides himself in being optimistic and taking the pressure of the players in public. That seems a sensible press strategy. Why do we still look for him to do anything else. He needs to focus on the job at hand – shaky tactics, invididual performances which rang from inconsistent to terrible and the squad shape which needs imrpving.

Spot on but sometimes we just need reassurance that he accepts that things could be better!!!

This squad is not better than our invincible squad, that’s just a blatant lie & he’s not fooling anyone.

Jens, Sol, Vieira, Bergkamp, & Henry alone would have destroyed Bradford!
And I mean 5 vs 11 players.

You people do realise that he’s asked questions and fucking answers them. Would you rather “actually I’m not going to say anything for fear of getting some pointless contemptuous comment on Arseblog”

if that was in regards to my comment, take a chill pill. i didnt add that 2nd part of the sentence (if it isnt that disregard this beginning) there’s a middle ground to had in most arguments, and this one is no different. of course he is asked questions and he can’t say “yeah this squad sucks yada yada” but he doesn’t have to go to the other extreme and say “this squad is the most serious squad i’ve had.” he could just say “this squad is underperforming and they’re aware of that, but it isn’t from a lack of… Read more »

I loved Coquelin’s awesome run through the defenders in the Bradford game. It’s a terrible shame his run led to a shot on post. I hope we see more of that kind of effort.

Whoever said we shouldn’t pay too much attention to the pre/post-game feelings is right – as fans it doesn’t give us anything, it’s more for the players to see. I just wanna see more of that Coqqy (yet disciplined) attitude. I want to see that change on the pitch – the hunger for goals.

hehe i see what you did there with coqqy, very clever!

unless you didnt mean coqqy = cocky

Haha, i meant it. It would be nice to see a lil ego sometimes. I hate to say it but it sets top teams/footballers apart from lower – it keeps belief and confidence, so while it’s not Arsenal’s style… every so often it wouldn’t hurt (while we have the talent to do it).

We should get hang up on that.. After all he is the one who build previous squads as well. If we give him time then we would this time around.. We got good core of Santi, giiroud, jack, Gibbs, jenkinson, schzeny, mert, kos.. And arsene knows he needs to build around them starting this January.

phat
Reply to  A N Other

szczesny… u call yourself a gooner?

A N Other
Reply to  phat

As long as you know what I meant.. and your response suggests you did.. Anyway it’s not our fault that his name is difficult to spell and pronounce.. It doesn’t make him a bad player and me a bad gooner..

I meant we shouldn’t

Players like Henry, Pires, Bergkamp and Wilshere are naturally gifted so they play spontaneously and off the cuff, less gifted players have to work harder at the mental side of the game, unfortunately we now have many more less gifted players, and if the whole team is not 100% focused and not on top of their game, we just don’t perform….Buy some fucking talent!!!!

This Bradford thing is getting annoying. Ok, Arsenal sucked but I agree with Wenger that we should look forward. ffs, the gap for the 2d place is 9 points and 1st place 15 points. Those are 3 and 5 games of difference in points. Now, I’m not saying we’re going to win the league hands down, but it’s fucking december and a lot can happen. Have some faith. God, I hate the media.

I’m not saying that we still can’t win the title….

True ..so your post suggests you are happy with the 4th place trophy…not me …not this season..and what happpens if we don’t get it..what can you do…that’s right nothing….atleast I stopped my seasons…not going to give a penny to this board..happy with Arsene…but the board sucks

This man will defend his weak and very serious squad even if they lose to a conference team!

You are too arrogant Wenger.

Arrogance is not always a weakness… The best are often arrogant.

Yes but you look really daft when you can’t back it up with success. Red nose is an arrogant bastard, but he can back it up with trophies. It’s been a long time since Wenger could.

I am confident of one thing on this earth and that is i can never ever be deceived by wenger again.the players should be serious on the pitch not the other way round

It is sad, but for the first time ever, I feel embarrassed for Arsene when I read his comments these days.

Eh, nothing new here. I have alot of respect for Wenger and what he’s accomplished -even though I started following Arsenal in 2006 and I’ve never seen them win anything. However, I’ve always found Wenger says the most absurd things. Maybe it was better in the past, and I wonder if everything he says in calculated to support the team or boost transfer negotiations (when he claims this or that player will not be sold). Regardless, these comments have the result that people like me, who support Arsenal, still think Arsene is full of shit and don’t believe a word… Read more »

neutral, of course he is not telling the (whole) truth, do you honestly expect him to do otherwise? Especially regarding transfers, saying that he want to sell theo would cut his price by several mils – and that’s obviously not good for club. Just use your brain and think about to whom are his comments aimed, and you will find out that most of them make perfect sense, thought (or because of) they are calculated.

As much as I still love Arsene, his comments these days remind me of Comic Ali’s zingers from a few years back –
“Who are in control, they are not in control of anything – they don’t even control themselves!”
“I have detailed information about the situation…which completely proves that what they allege are illusions . . . They lie every day.”
and…
“We have them surrounded in their tanks”

Oh noes! Our manager has defended his team. How dare he. WENGER OUT!!!12

The real question is, would the invincibles taken out of retirement beat this current team. Henry, Cashley and Toure are still playing so I reckon they could give them a game as long as they didn’t run too much.

Do you guys really think Wenger cares if he looks daft to you? Do you expect him to chuckle and say, “My, Gervinho was shit, wasn’t he?” If you want that kind of manager you might go support QPR, there’s a good chance ‘arry will talk up his wife’s finishing skills over that of his players at some point this season and you’ll all feel better.