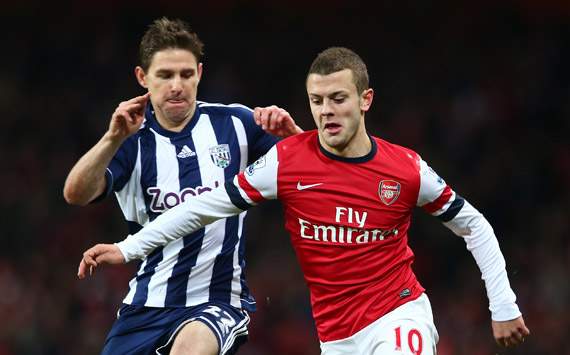 On Thursday, Arseblog News told you that Jack Wilshere was close to signing a new Arsenal deal, and in today’s Sunday Mirror the midfielder confirms that he’s in talks with the club and says that he’d like to captain the club, but not just yet.

Although he has two and a half years left on his current deal. the club are anxious to tie him down to a long-term contract, along with other British players like Kieran Gibbs, Alex Oxlade-Chamberlain, Carl Jenkinson and Aaron Ramsey.

And the fact that the club are going through some difficult times isn’t an issue for Wilshere as he’s sure the club will start challening for titles again.

“Yeah, I’m talking to the club and I probably will be ­committing my future to the club in the next couple of weeks, he said. “I know the club are going through a bad time, but it’s not a problem for me.

“I think you’ve seen over the past few years the top players have probably thought they don’t see a bright future at Arsenal. But it’s different for them, they were a bit older than me.

“I’m 20, I’ve still got a long way, touch wood, to go in my career. Players like Robin are older and maybe he thought ‘I haven’t got time any more’. And Cesc wanted to go home to Spain, which was ­understandable.

“But, for me, I’m young and there are older players around me, and also younger ­players around me. So in the next three or four years, we can challenge for ­everything.”

He expressed his desire to one day captain the club, but is sensible enough to realise now is probably not the time.

“I know the tradition, and I have been in the first team since I was young. Don’t get me wrong, I’m not saying I’m ready to be captain now. But one day, yeah.”

Captain Jack, has a nice ring to it, you have to say. No, not Johnny Depp. Shame on you.

Our very own Captain Jack.

We want it to , its just a matter of time.

Captain Jack you say, does that mean we get to have our very own pearl?!

As one of our top players ,I am glad he’s try to break the tendency of our best players leaving .

This is all very good, but does anyone find his comments slightly worrying?
He seems to have moved from “I promise never to leave Arsenal” to “I’m still young so at the moment it’s not a problem”.
Can’t help feeling he is beginning to come round to the fact that there may be bigger and better things than AFC for him

He would be as niave as some of the fans here to not have those thoughts. Does not help that the media bills him as the best english footballer of his generation. Big players need a big stage. I hope arsenal can provide him with that.

Well unlike he signed a long term deal , maybe he’s genuinely optimistic about our chances.

As much as we want ,not every team can have the Gerrards,the tottis and del Pierros….Wengers too

Captain Jack to the rescue as Arsenal recover from a goal down to thrash Barcelona 6-1 in Champions League Final.
Yep, nice ring to it 🙂

remember the invincibles, because we aren't good anymore
Reply to  Kiran

What I love about him is that despite being about three feet tall he can give as good as he gets and will take shit from no man. He actually shows passion and love for the club, and how bloody refreshing is that? And for everyone saying ‘oh well, he’ll just leave in the future’, yes that’s a worry, but seriously, let’s cross that bridge when we come to it and just rejoice now that in Wilshere we have a player who is skilful, passionate and, most importantly, a gooner. If he didn’t want to be at the club then… Read more »

Exactly, no point worrying about it. If we’re not in a position to give Jack a winning team, there’ll be problems far more persistent and worrying than losing the best English player of his generation to go and play with the aging but prolific RvP and link up again with Theo in the Theatre of Nightmares.

Sorry, I ended up worrying.

If there’s a light at the end of the tunnel, it’s Jack.

Arsenal future is bright. The future is Captain Jack Wilshere

I should qualify that last comment by saying that if he didn’t want to be at the club ‘at this present moment in time’ then he knows that there would be no shortage of suitors for him, prodigy that he is, but he’s signing anyway. Loyalty may be at a premium in football, but right now, Captain Jack is showing some.

Gotta love Jack having a go at players who left Arsenal during troubled times like Na$ri and the Dutch Skunk.

Top lad Jack loyalty so rare in football these days.

From my perspective that day can be tomorrow.

won’t even be at arsenal in 2 years

The biggest problem is the board, they will probably try to sell him…

building the team on the British players is a wise desision
I bet Wenger was very very disappointed with those foreign players’ leaving whick made him re-build the team again and again…there was so many “what if”s.
Jack will definitely be a great captain.

Jack to the future.

one of the few things that is right in the club at the moment, long may be stay fit and in our team.

The real Captian Jack not the pirate..

Just hope the club do his talent justice and start to surround him with world class players. We wasted the early years of cesc let’s not make the same mistake with jack.

We build em up high, so when we knock em down they fall hard. See: Rvp.

My faith in footballers is gone. Walk the walk, never mind the talk.

Please pay him well so that he will not be tempted to go when less better players will be earning far more than him elsewhere.

in a few years i can see jack as captain and jenks as vice, and a room full of silverware every year….at least i can hope for that

I hate the sun how can they post a cover story of wilshere with the title “I will stay” wilshere never ever said that his future is in doubt and he was considering leaving arsenal or play somewhere else and now the sun run the story like wilshere wanted to leave he was considering his future and he decided to stay and sign new deal. what a bullocks.

The passion and love Jack has for Arsenal I can see him guiding us to the greatest heights and defo will be a future legend. And you know when he is made captain, he’ll be very Tony Adams-ish, give the players an arse kicking if they do something stupid during a match, like do a Gervinho.

As Naive as I would be to realistically believe it would happen, I’d love for in a couple of years Arsenal to have a team with an English/Gooner core, Captain Jack, Corporal Jenkinson, Rambo, Gibbs, Szczesny (Who’s practically English now come on), The Ox, Afobe. Would be great, like the way Barcelona’s team is all from La Masia

Hot damn do I love this guy. He really is a fan. He isn’t going to bail on the club…when other players left when things looked even better than they do now. You know I am not English, so I am not one to go crazy about English players, but it needs to be said that I will take an entire team of English lads if they will at least be faithful to the club. Yeah I loved Fabby and players like him, but why have players whose hearts truly are elsewhere? Glad to see not all footballers are the… Read more »

Captain Jack stabs the heart. The flying dutchman in this instance was nothing more than a leaky bamboo plank floating.

Wilshere is a legend

#10- here to stay. Your day will come to wear that armband.

I am sorry if I dont share the same level of euphoria like other people here. I have seen too many talented players commit to the club and leave without even saying their goodbyes. Actually I dont trust any modern footballers, have been fooled far too many times by sweet talking footballers. I just wish the kid well and may he play for gunners another decade. Maybe after a decade when he is the most decorated non-leaving captain of the club, I will buy his auto-biography and personally hunt his autograph and thank him for his loyalty. But for me… Read more »

Jack Wilshere will lead Arsenal to the premier league title sometime in the next few years. I’m sure of it!

I have always had this feeling that Arsenal’s fortune would turn once Jack is made captain. Who knows, if not for his injury he might have captained the team this season..

Great news he’s going to be an arsenal legend,my two kids will be delighted the 7 year old just got wilshere on his new jersey on his trip over for west brom game and the 3 year old said his name was jack wilshere when asked by Santa recently, his fucking beard nearly fell of laughing at him